The analysis, explains Josh Gray, former athenahealth vice president of research, incorporated data from more than 3.5 million visits by 1.2 million patients at 1,626 primary care practices. All patients were at least 19 years old, and “visits" included those of all types — no-shows, cancellations, and rescheduled and kept appointments.

They also collected information related to health status and patient demographics, including age, insurance type, and the presence of “primary care-sensitive" conditions like diabetes, hypertension, and myocardial infarction. “It's important to understand which patients are most likely to leave, so we thought we'd see how no-shows affect attrition and whether the impact varies among different patient populations," says Gray.

By far their biggest finding, Gray says, is that having even one no-show appointment “increases attrition drastically." 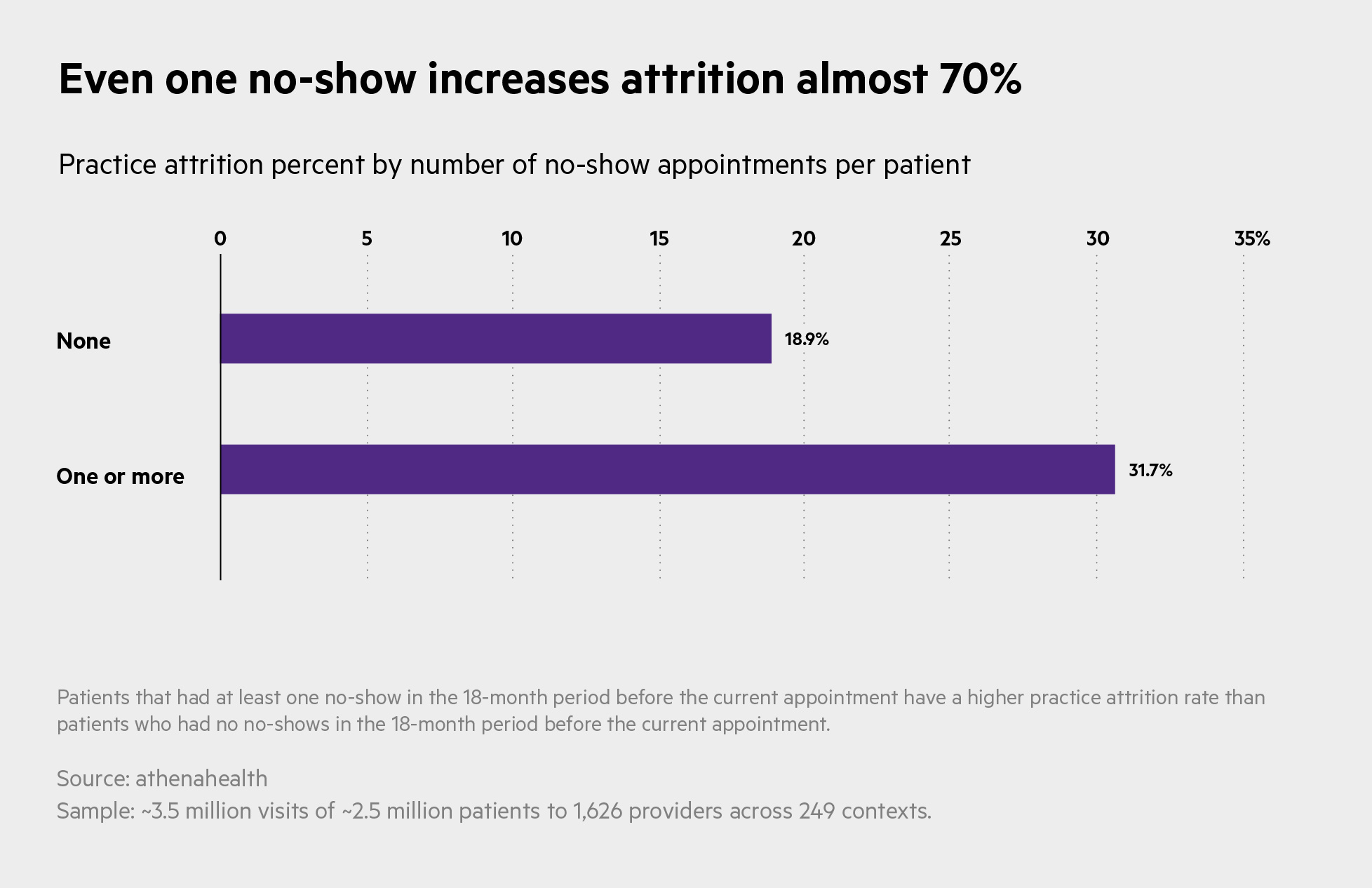 Among all patients, he explains, those who never no-show have a practice attrition rate of slightly less than 19 percent, while almost 32 percent of patients with one or more no-shows don't return to the same practice within 18 months. 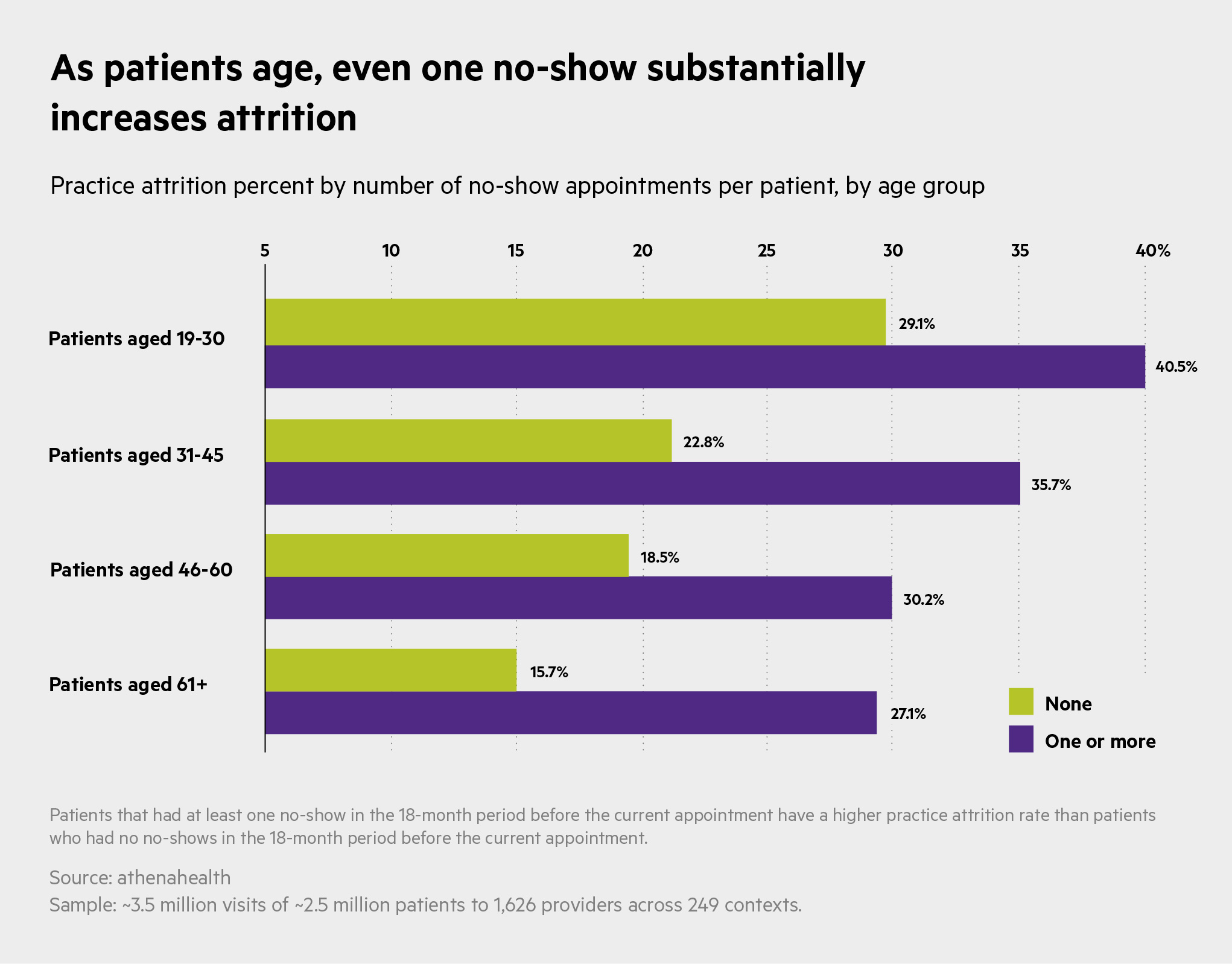 Increased attrition rates following a single no-show were observed among patients of all ages, Gray adds. Patients ages 19-30 with no no-shows, for example, have an attrition rate of about 29 percent, while those in the same age range with one or more no-shows leave at a rate of almost 41 percent. For patients ages 31-45, 46-60, and 61-plus, meanwhile, attrition rates for those with one or more no-shows — when compared to their peers with no no-shows — went up by 57, 63, and 73 percent respectively. 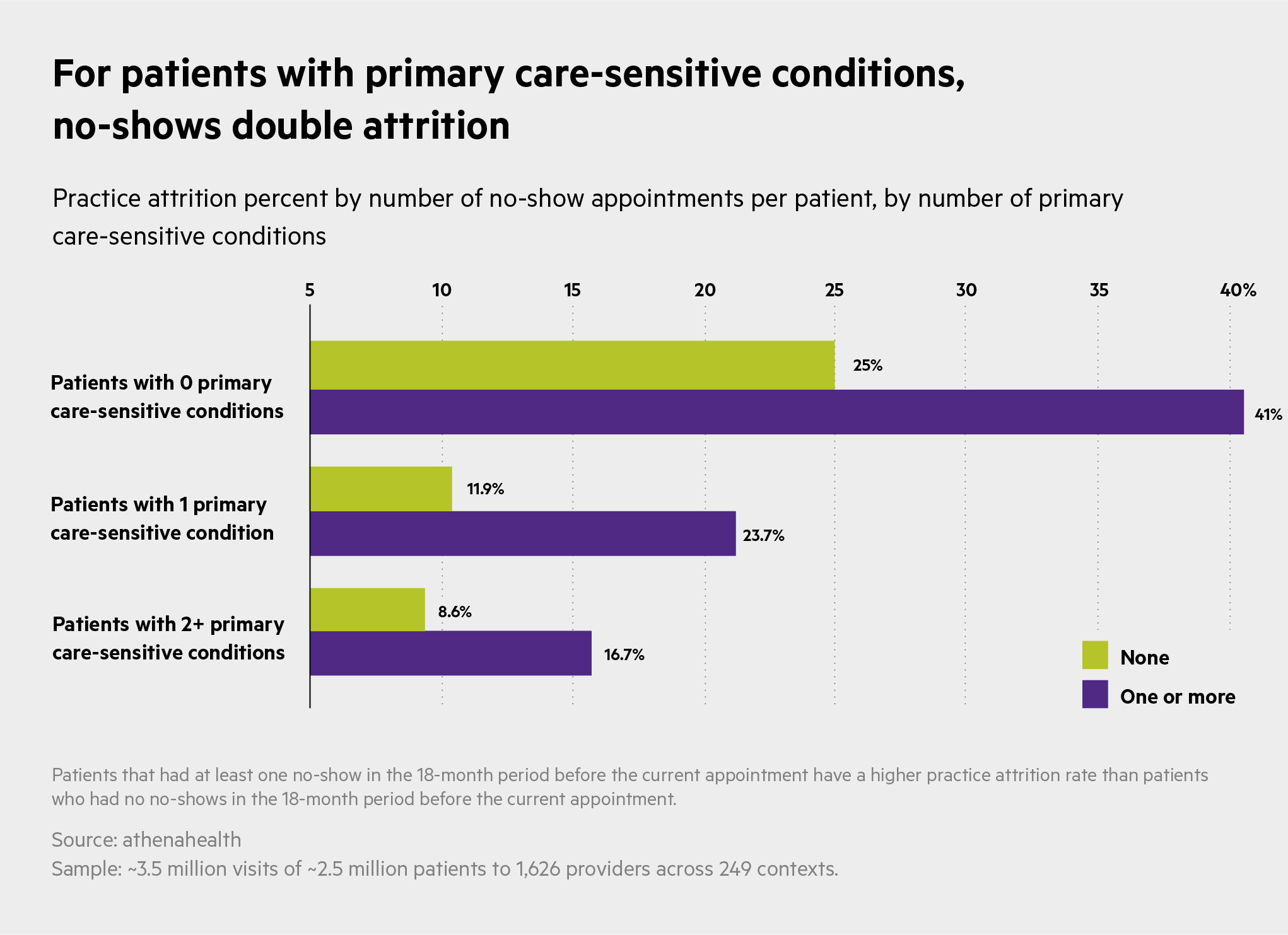 “For doctors, that should be concerning," Gray says. “Some patients who no-show may have serious health problems, so it's important to look at this not only from a business perspective, but also from a clinical perspective."

Christine E. Kistler, MD, MASc, a primary care physician and associate professor in the Department of Family Medicine at the University of North Carolina at Chapel Hill, agrees. The co-author of a 2017 paper on the reasons for missed appointments and assessing the use of reminders for getting patients “in the door," Kistler is also affiliated with the UNC Family Medicine REACH Program, a clinic she says has had great success at reducing no-shows.

Their approach involves the usual outreach, including phone, email, and/or text reminders according to each patient's personal preferences. But it really begins with scheduling itself and ensuring that appointments meet people's needs. “And one of the ways you do that is by allowing them flexibility in terms of access. You don't schedule an appointment for three months out when it's likely that person doesn't know what they're going to be doing three months from now."

Other anti-no-show tactics, Kistler says, include offering weekend appointments, providing transportation to those who need it, and allowing patients to book appointments online. Give patients choices, she recommends, and there's a good chance they're going to show up as scheduled — and return for their future appointments as well. 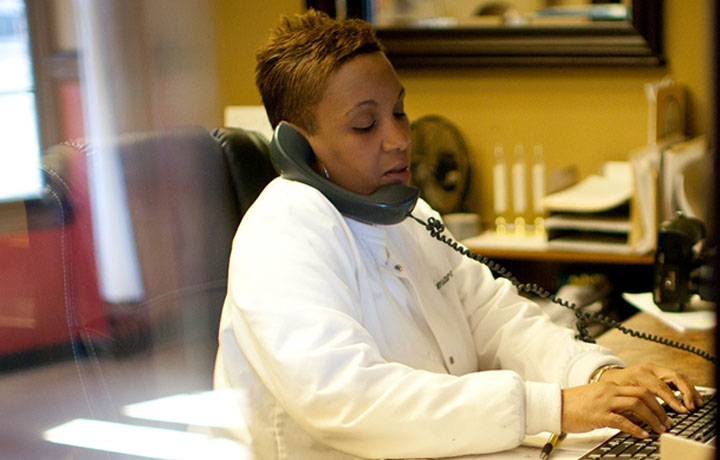 Data show the longer patients wait for a first visit, the more likely they are to cancel 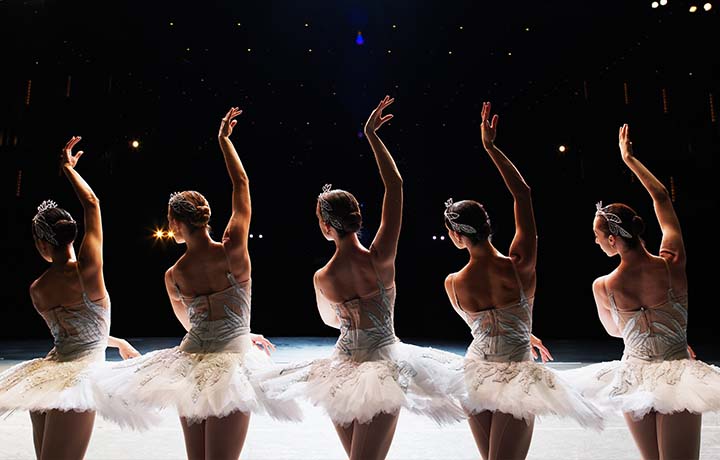 Patients with high balances are less likely to return for care – but practices have options. 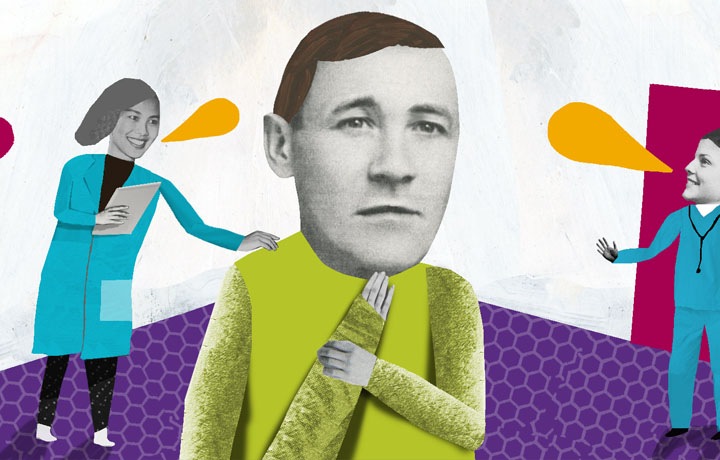