The telehealth tide: Who is using it and who isn’t

How would race and ethnicity factor into the telehealth-adoption question? And where would older patients stand with this technology? Given that seniors as a group aren’t as digitally connected as younger people are, what would they think about virtual visits?

The jury is still out on why some patients might take to telehealth more easily than others. Beginning in 2020, athenahealth has been conducting research into the use and impact of telehealth. The research includes analysis of de-identified data from across athenahealth’s network of customers as well as conversations with providers, and it reveals some interesting demographic trends in who is currently using the technology.

Women and younger patients more likely to use virtual care

Among the key findings from the research: Female patients are slightly more likely than men to have virtual appointments, while patients over 60 years old are less apt to use telehealth than their younger counterparts. “Older patients do use telehealth when practices encourage it,” noted athenahealth qualitative research manager Lia Taniguchi. “If you can provide plenty of support, patients you might think would resist the technology often become enthusiastic adopters.” 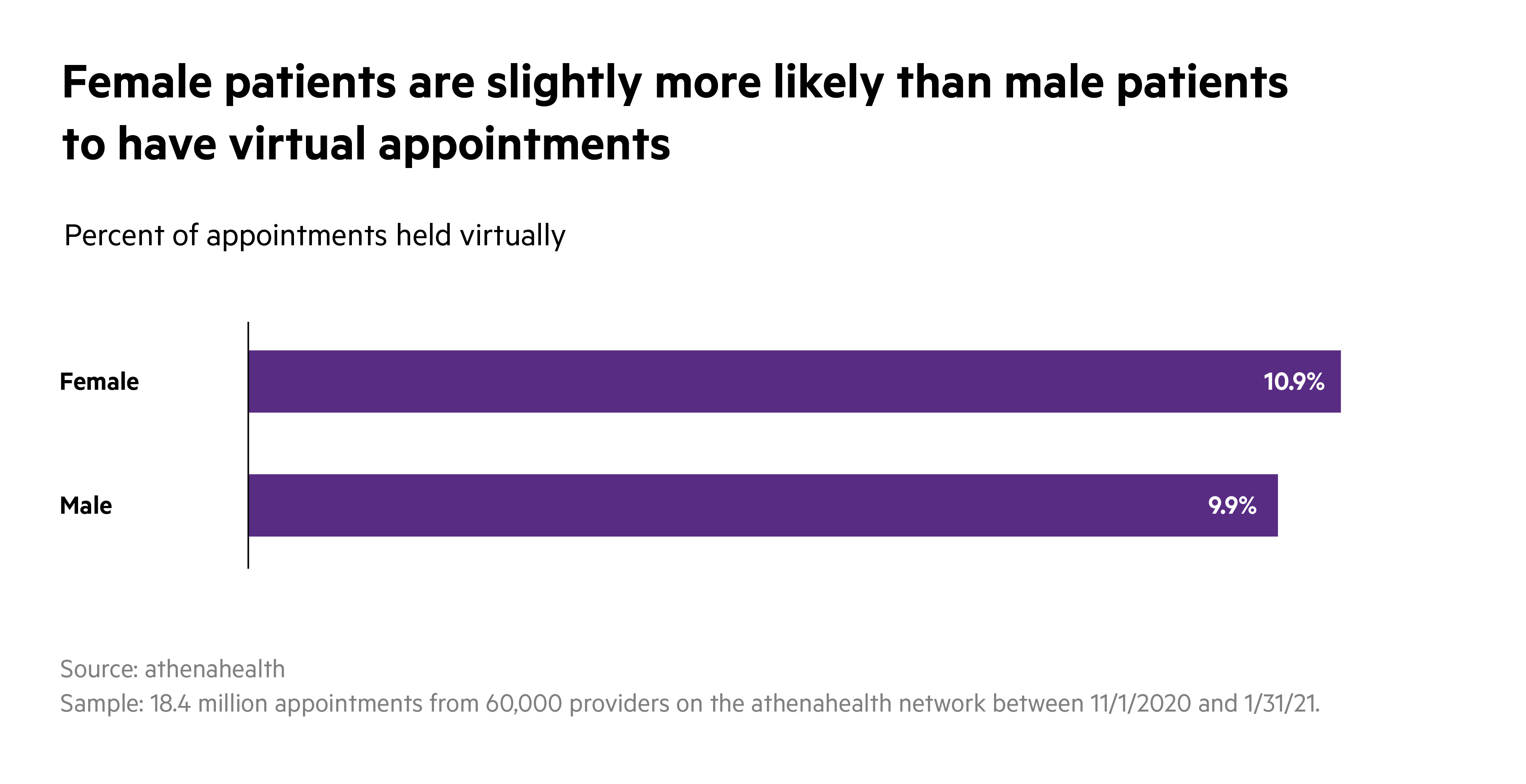 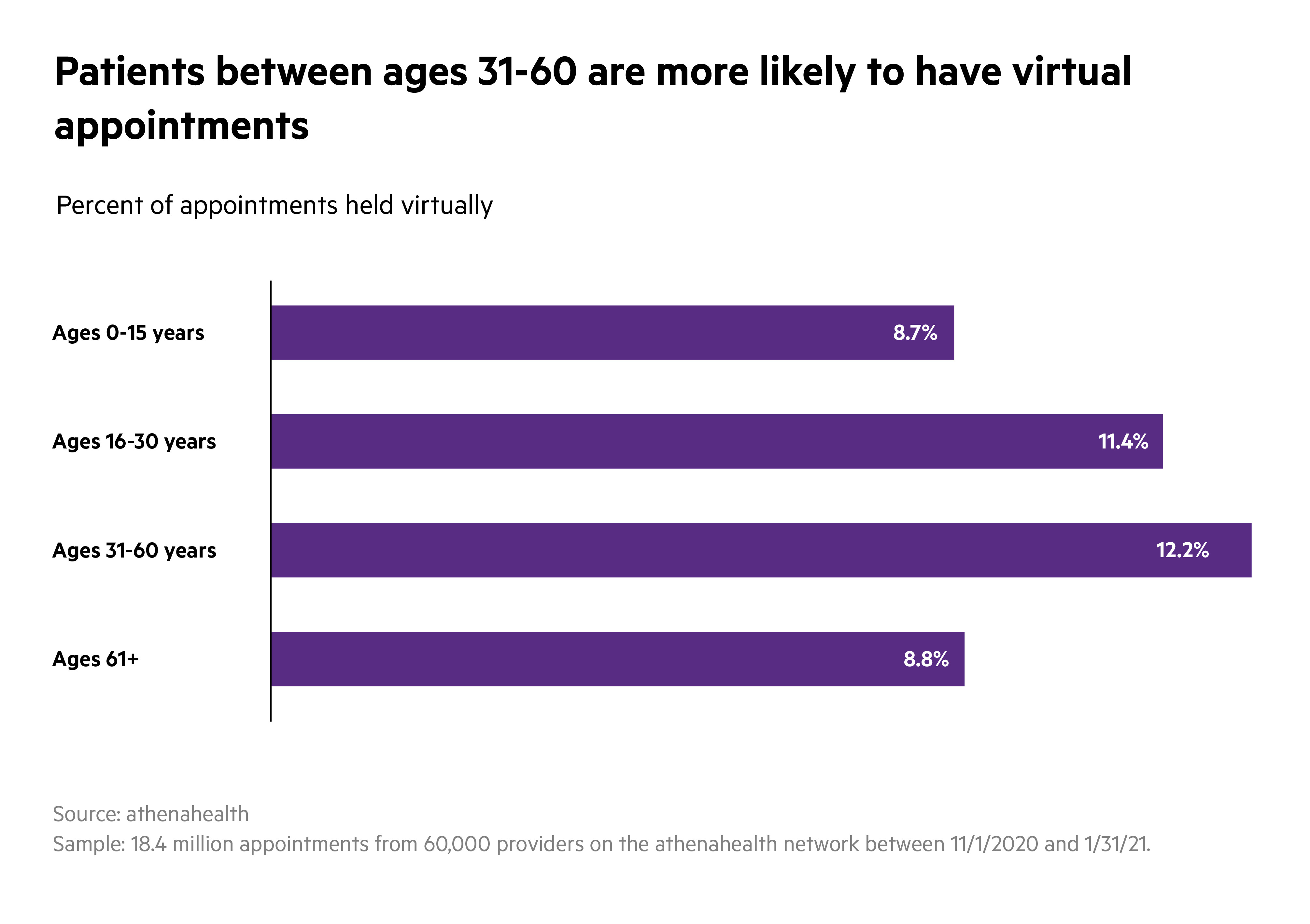 The research considered data from all practice specialties on the athenahealth network, including primary care (40% of all appointments), OB/GYN (7%), pediatrics (5%), orthopedic surgery (4%), cardiology (2%), and mental health (1%).

During the same November-through-January period, 10 percent of appointments booked for white patients were held virtually, while this rose to 10.6 percent for Black patients, 13.8 percent for Asian patients, and 17.1 percent for Hispanic/Latino patients. 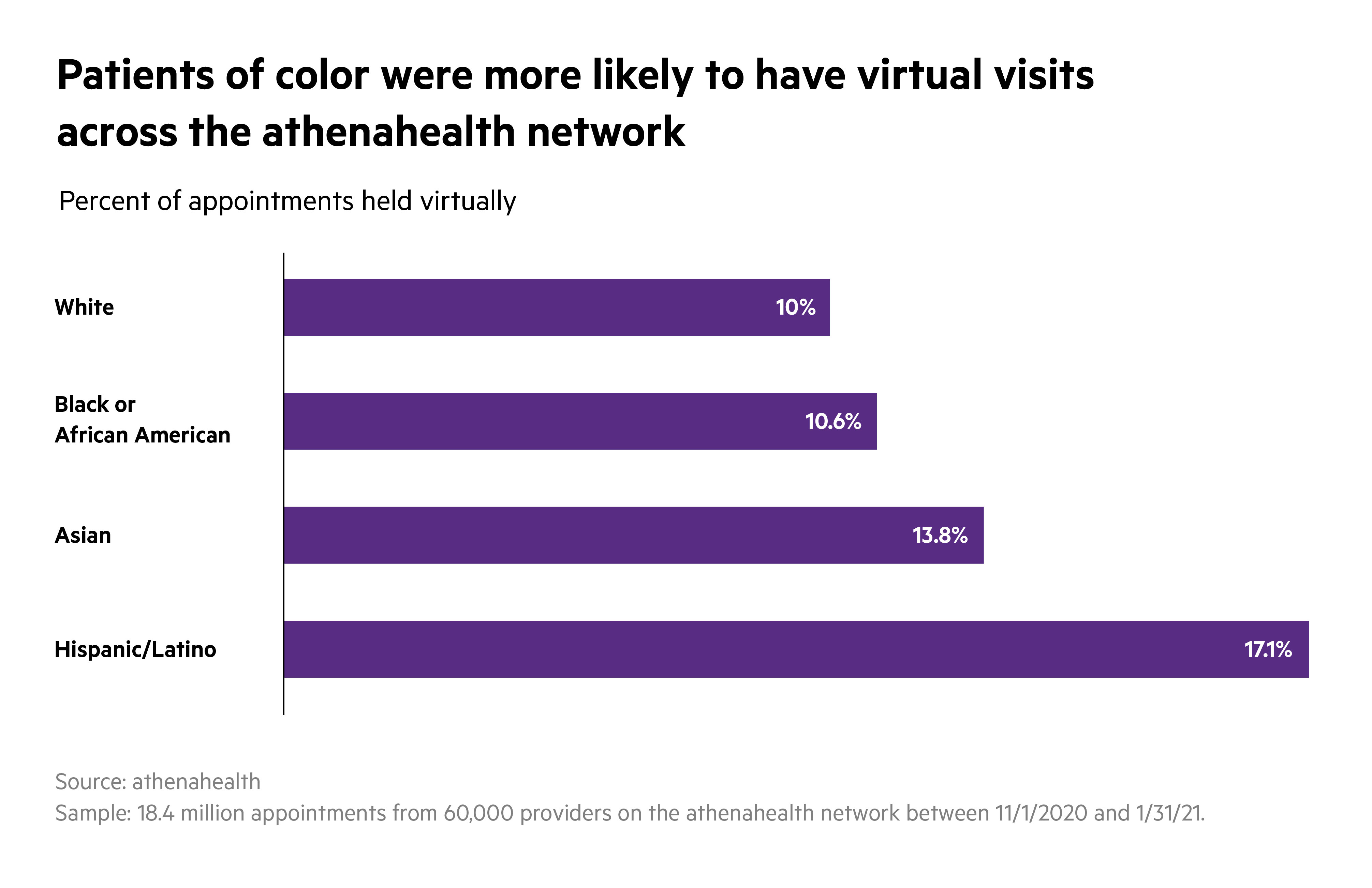 While it may appear that patients of color are more likely to have virtual visits on the athenahealth network, further analysis reveals that’s only because the practices they go to are relatively heavy adopters of virtual technologies. At practices serving populations that are between 50 and 75 percent Black or Latino, 13 percent of appointments were conducted via telehealth, while the rate of telehealth appointments doubled to 26 percent at practices with Black/Latino populations at 75 percent and above. “It’s driven by the practice where they receive care, not something intrinsic to their racial/ethnic identity,” explained Carl Gidley, quantitative research manager with athenahealth. 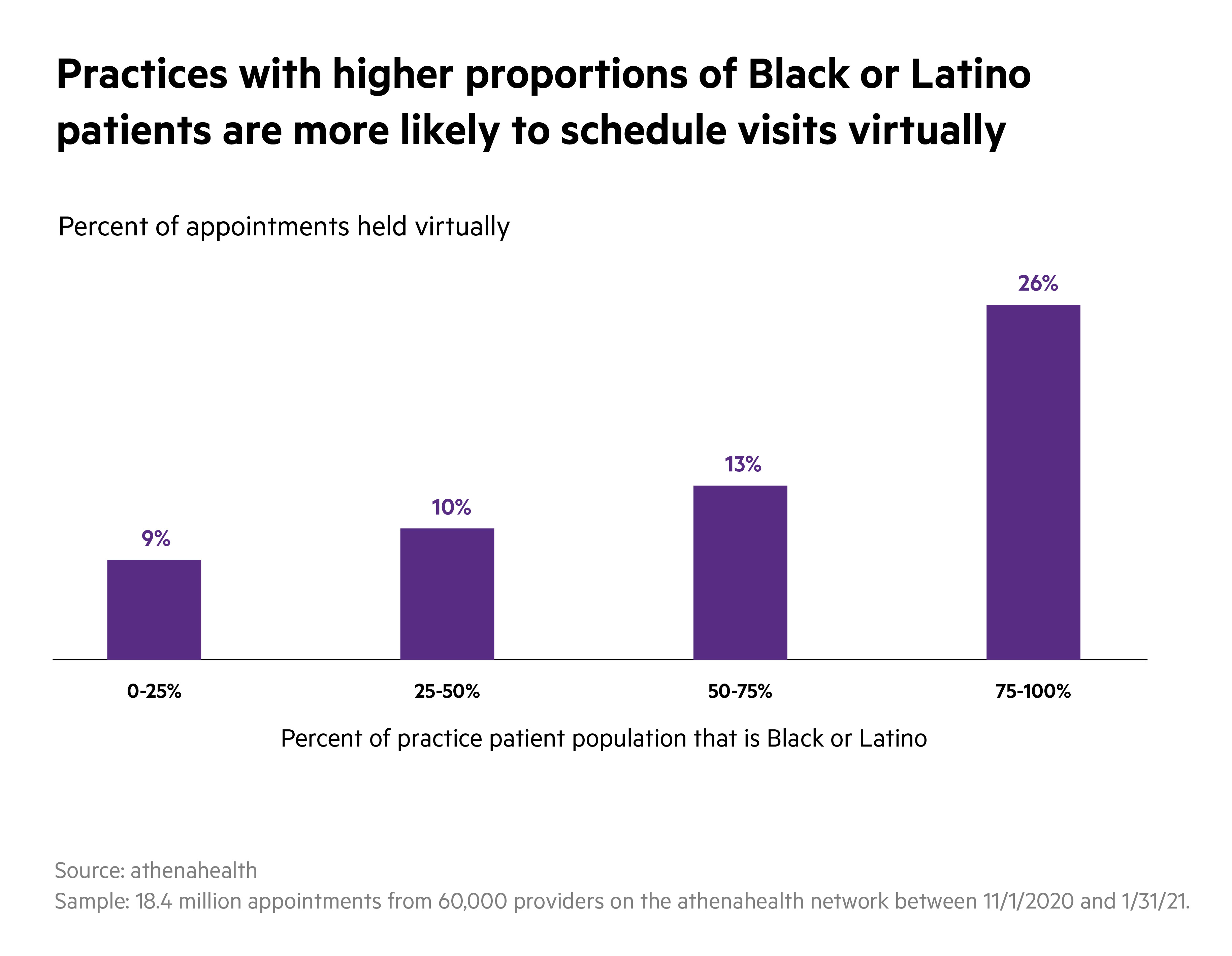 According to Taniguchi, differences in telehealth implementation between rural and urban practices probably explain at least some of the variance in usage among the study’s patient cohorts. (Other research has shown that rural hospitals, for example, are less likely to offer telehealth services than those in urban areas; and rural regions are generally older and less racially and ethnically diverse than metropolitan areas.) All other things being equal, however, the analysis and concurrent interviews with physicians and practice managers show there’s room for telehealth to grow in most organizations. “Throughout the pandemic, many practices have shared that once patients have one or two virtual visits and get all their questions answered, even the most reluctant patients are comfortable with telehealth and appreciate the convenience,” Taniguchi said.

That’s been the experience of Kemi Alli, M.D., CEO at Henry J. Austin Health Center in Trenton, NJ. HJAHC had explored possibilities for virtual health over the years, but only committed to launching a full-fledged telehealth program once the pandemic set in. One lesson the organization learned early on, Alli recalled, was not to assume that certain patients would be technologically literate. “It’s just like health literacy. It’s often real simple things that a lot of us take for granted.”

With that in mind, Alli said, they relied on patient navigators and other specially trained staff to both encourage patients to use the technology and help them along the way. “Even to the degree of, ‘How do I turn my camera on?’ or ‘How do I make sure my microphone isn’t off.’ They’d walk them through all of those things to make sure they felt comfortable.”

HJAHC also set up a telehealth station in one of its health centers for patients who lacked internet access at home, or who didn’t own a smartphone or computer. Most patients didn’t need that service, but for those who did, it made the difference, Alli said.

The organization’s most recent numbers show that 76 percent of patient appointments overall have been held via telehealth since the beginning of the pandemic. Alli doesn’t think that any one demographic has stood out as more or less likely to use the technology. What she does know for certain, however, is that telehealth has improved HJAHC’s productivity, and that has driven profitability. “Telehealth increased access for so many people—in the midst of a pandemic, when so many were being laid off, we actually had to hire.”