ADHD rising as share of visits, particularly among boys

Beginning in early March, athenahealth has seen an increase in the percentage of patients aged 13 to 17 receiving a new diagnosis of attention deficit hyperactivity disorder (ADHD), particularly teen boys. This increase began just as lockdown orders were taking effect in much of the country. 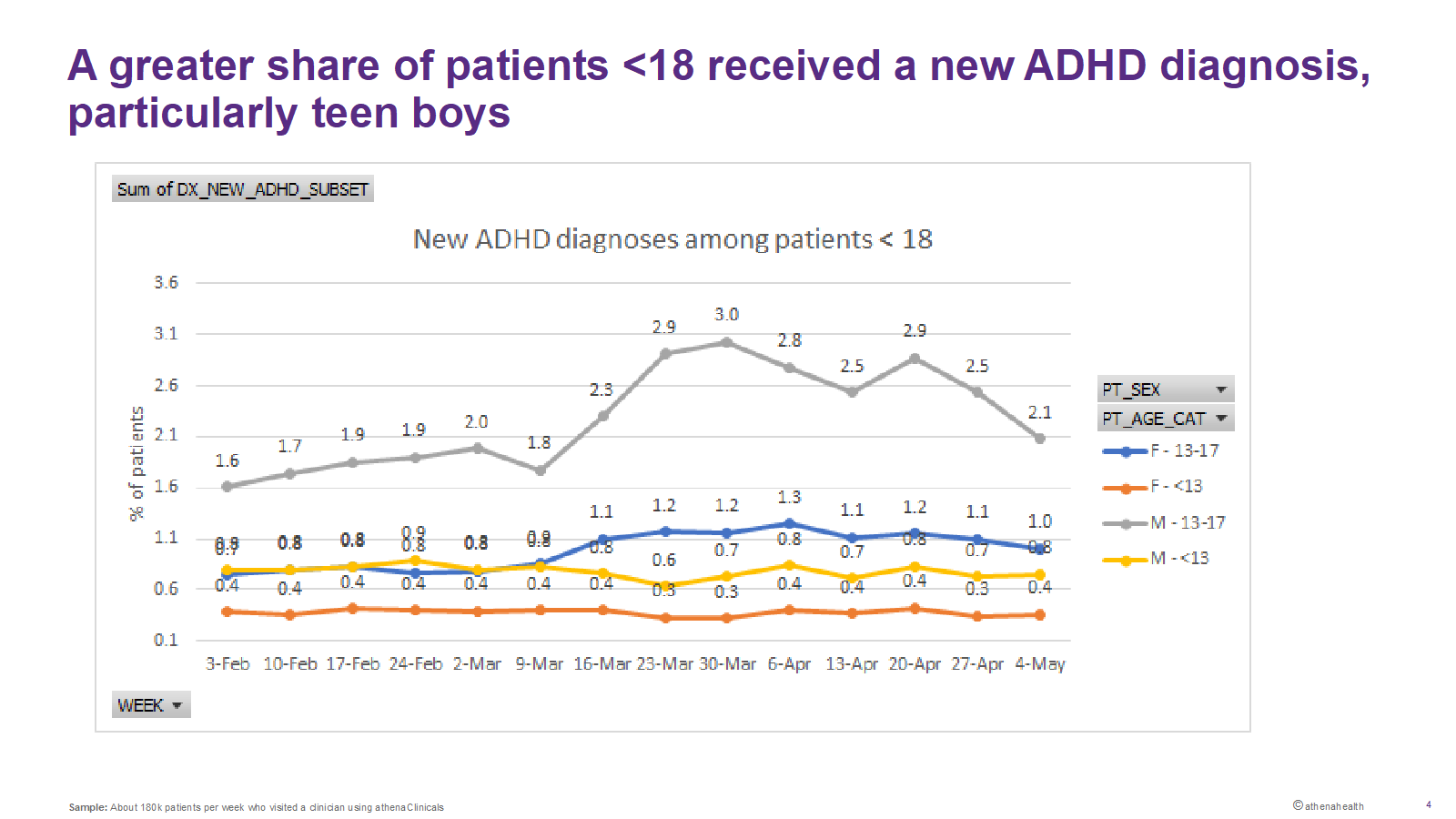 The share of visits with teen patients that resulted in the prescription of ADHD medication also increased beginning in early March, and was higher for teen boys than girls. 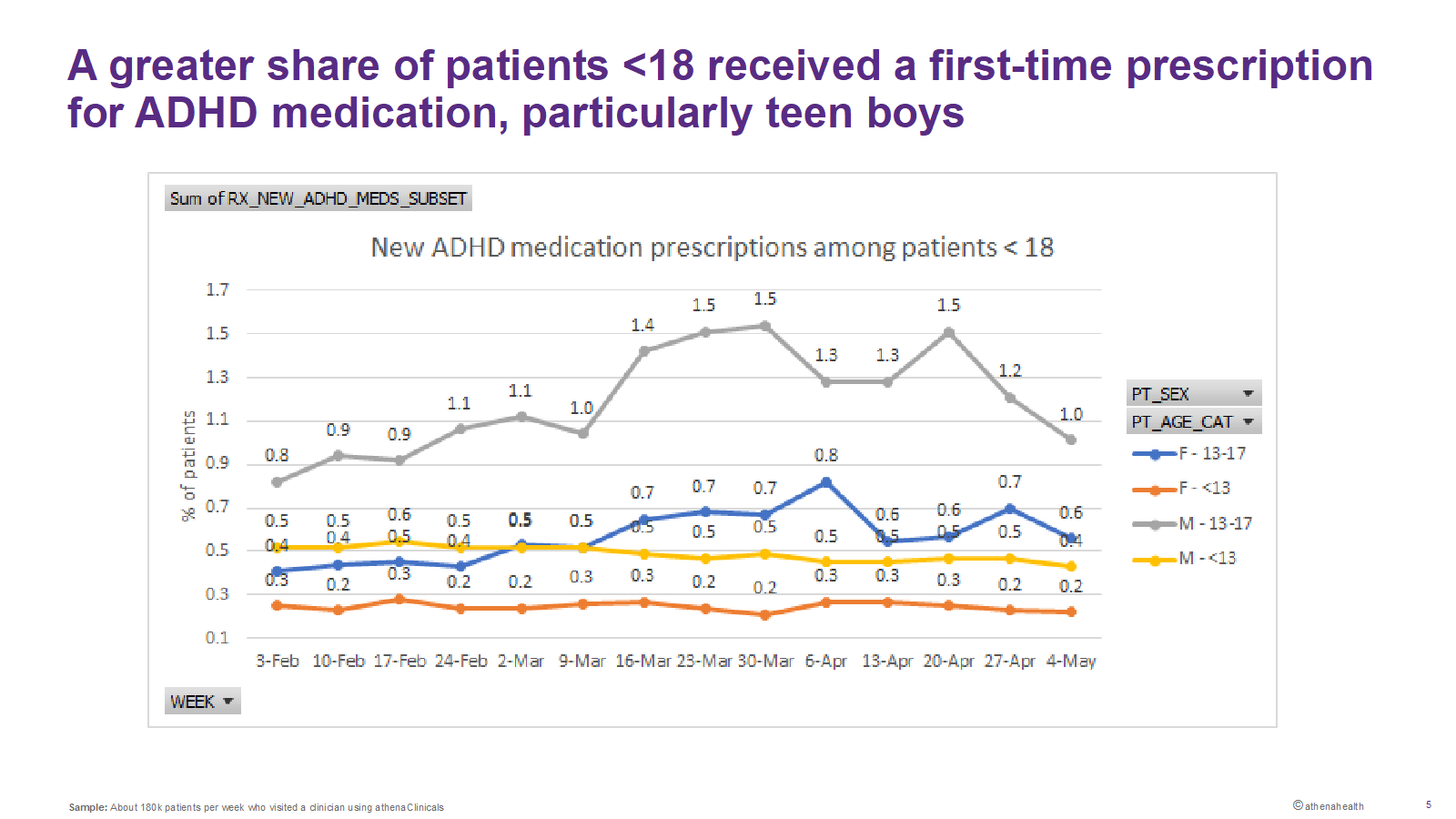 It is important to remember that visit types and volumes changed dramatically throughout healthcare during this period, so this does not necessarily mean there was an absolute increase in ADHD diagnoses during the pandemic. However, it does indicate that parents were continuing to seek out care and diagnoses for attention-related issues in spite of the pandemic.

Anecdotally, pediatricians suggest that a number of factors may be at work. With parents home with kids all the time, many are becoming aware of their child’s attention issues in a new way. “Maybe the teacher said something at parent/teacher conferences,” suggests Vik Mali, M.D., partner at Mali & Mali in Sterling, Michigan, “and now the parent is in the role of teacher and they’re coming in saying ‘Oh, this is what the teacher was talking about.’”

In other cases, parents already had concerns, but had been unable to see a pediatrician because of work, school, and extracurricular schedules. According to Sheri Zager, M.D., pediatrician at Pediatric Associates of North Atlanta, P.C., “Some of it is a matter of parents now being available to bring their kids in and get the help that they have been meaning to get for a while.” And access is even easier because of the switch to telehealth for virtually all behavioral health appointments.

When it comes to any real increase in ADHD diagnoses, Mali cautions that there are confounding variables. “How much of this rise in ADHD is because of anxiety and depression? So when it comes to kids who are anxious and sad because they're not seeing their friends or are restricted to homes, suddenly it's manifesting as inattention and distractibility.” Time will tell how many of these diagnoses remain after the pandemic passes.

One broader pattern that may be highlighted by COVID-19 is the lack of availability of child psychiatrists and developmental specialists, leaving pediatricians to step in to fill the gap. At a time when neuropsychological assessments are not happening and schools are, by and large, not writing new Individualized Education Plans (IEPs), pediatric practices are doing more screenings themselves, according to Mali.

So, many practices find themselves filling in, screening and diagnosing ADHD and implementing treatment plans. “It’s more old school, frankly,” admits Mali. “We’re handing out Vanderbilt scales to the parents and teachers, getting them back by fax or email, and tallying the scores to get a rough idea.”

Across pediatric categories, a greater share of patients with an existing ADHD diagnosis brought it up at their visits during the COVID-19 period. 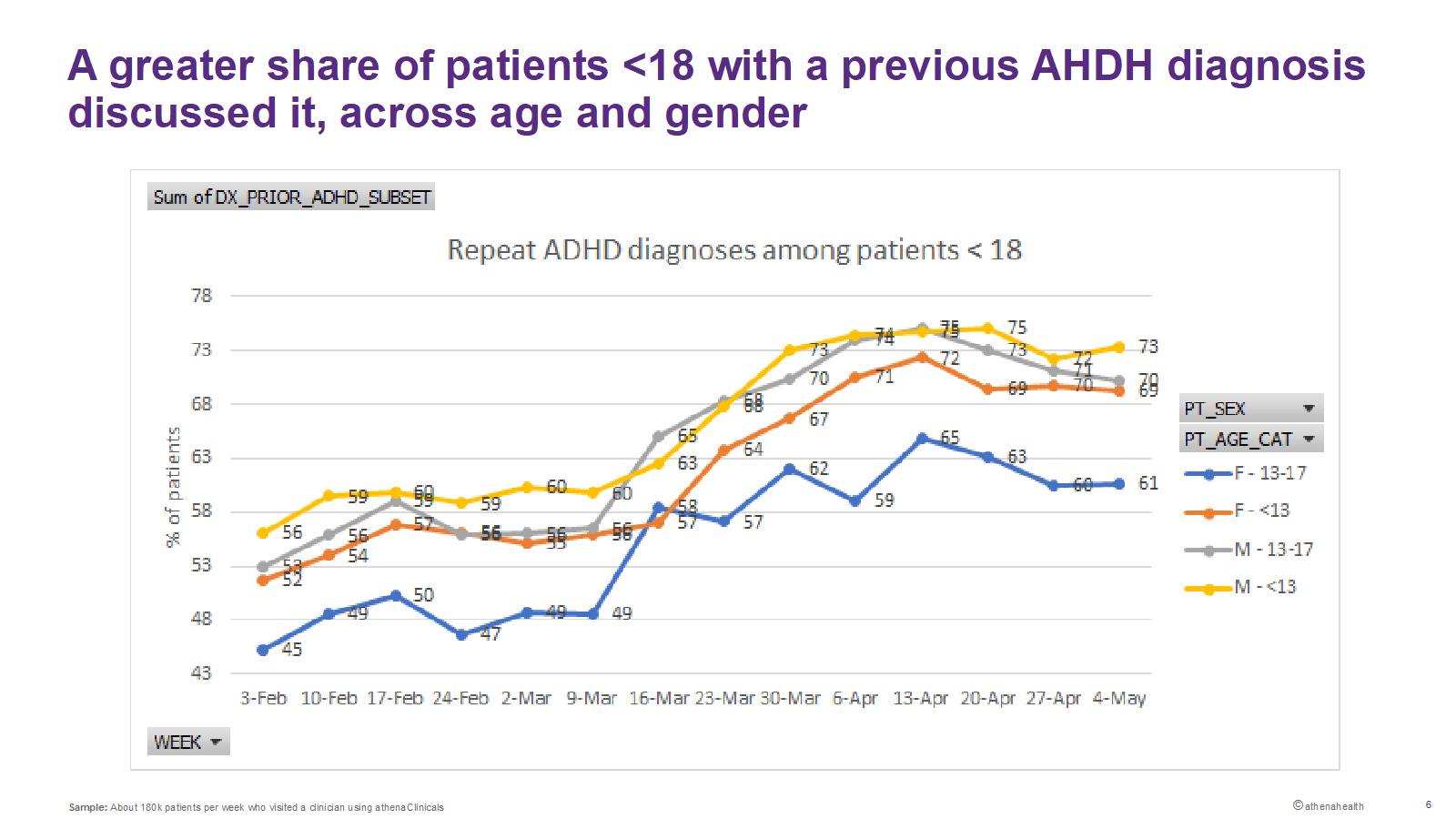 No similar pattern was seen in the previous year, and the timing of the increase corresponded very closely with the global pandemic. 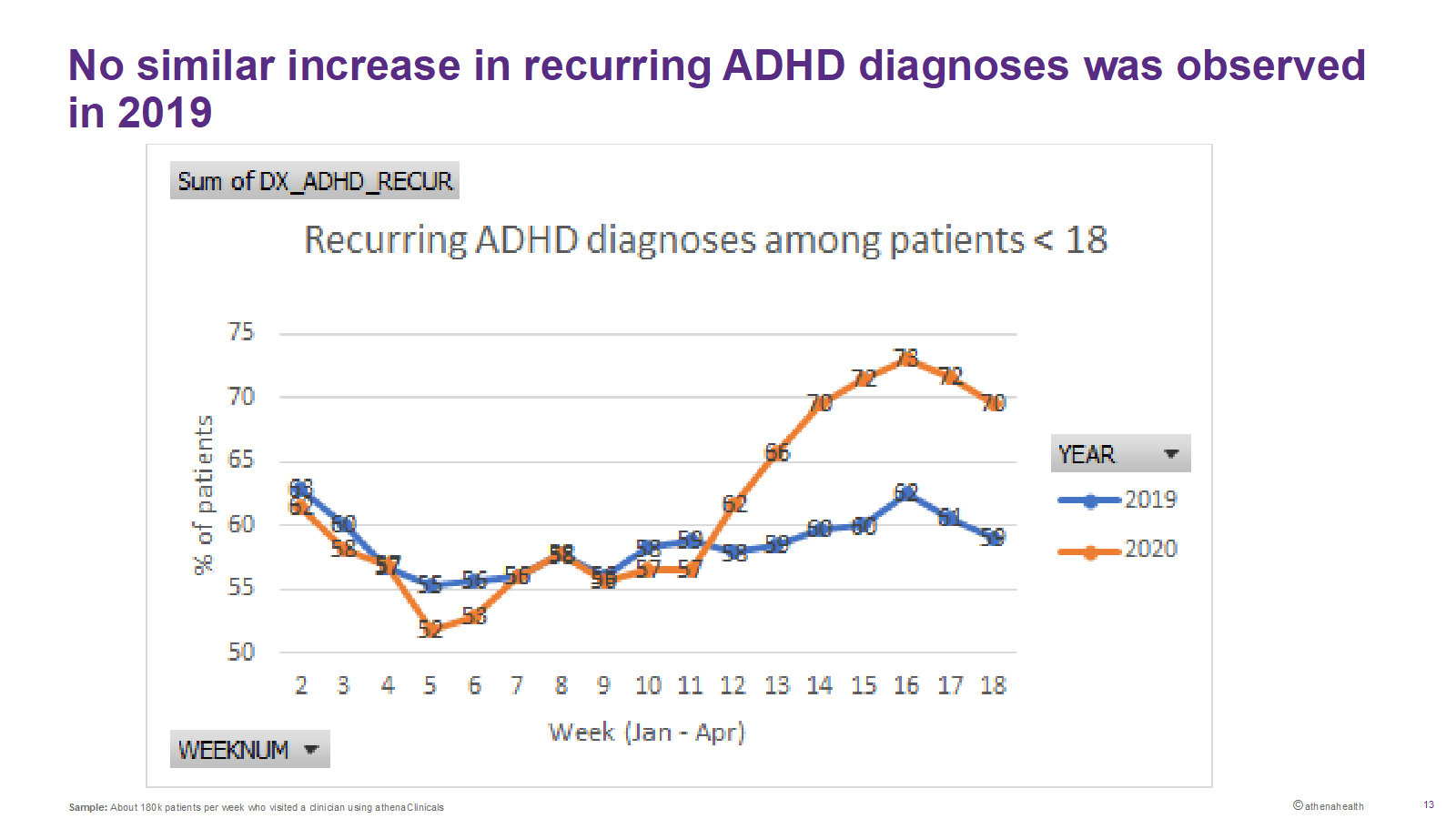 And a higher percentage of pediatric patients of all ages and genders made a point of renewing their ADHD prescriptions during March and April. 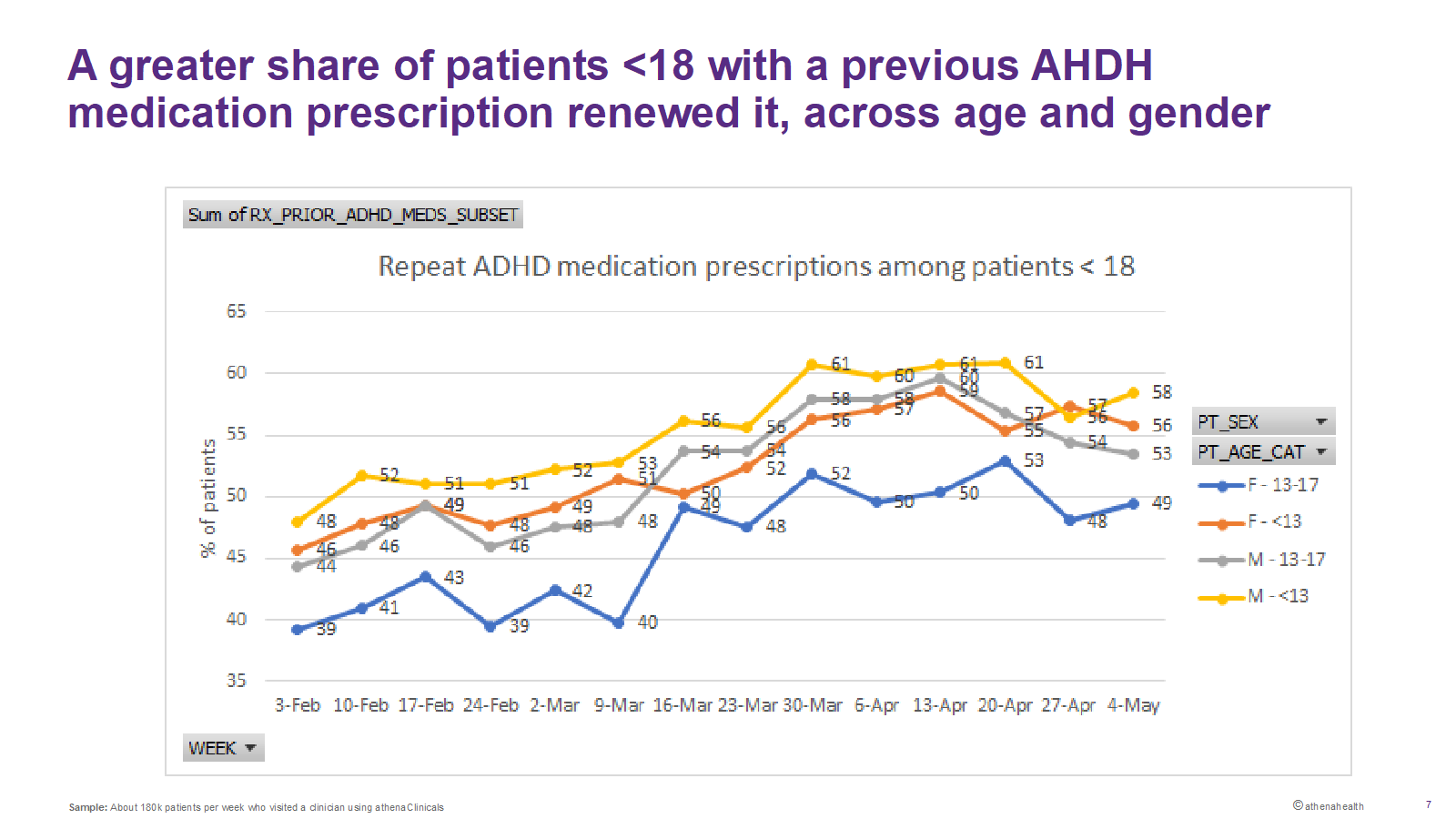 Again, pediatricians feel there may be a number of considerations at play. Both Zager and Mali suggest this pattern may reflect greater compliance with check-ins that are always recommended, but delayed by many busy families.

“Once every three months doesn’t seem like a big deal, but they still put it off,” says Zager. “But now they can’t say they aren’t available for a telehealth appointment for a refill. We are getting better compliance, and we can do a better job of following up.”

Mali agrees that it is easier to require compliance for ADHD prescription refills with the shift to telehealth follow-ups. “Before they’d say, ‘Oh, I forgot; can you just do one more month and I'll make an appointment next month?’ So rather than visits every three months, you end up with visits every five months.” But his practice is seeing less and less of that with telehealth visits – and is less likely to accept that excuse and write the refill anyway.

And compliance with ADHD treatment plans may be a higher priority as kids and parents alike struggle with distance learning, increased distractions at home, and more executive function demands being placed on students.

Mali acknowledges that distractions are rampant as multiple kids and parents are all trying to work from home and keep some semblance of productivity. “It's hard enough to do in the classroom. Trying to do that at home when a parent is on a call for work, and you're expected to do this on your own, I think it's asking a lot of these kids at various age levels.” And he notes that it “becomes infinitely more difficult to stay focused if you are in K-12, especially K-5,” which tracks with the data athenahealth is seeing.

It may also be the case that parents of kids with ADHD have made it a greater priority to follow up during this unprecedented time. Mali agrees, “I think it’s fair to say parents are feeling more diligent about follow-ups and complying with the care plan because they understand how important it is in this very stressful time.”

Telehealth saves the day – and raises questions of inequity

Providers agree that telehealth has been a game changer, particularly for behavioral and mental health care during COVID-19. Much of the increase athenahealth has seen in share of visits and compliance can be attributed, at least in part, to the improved ease and access offered by telehealth visits.

Zager indicates that her practice will likely continue telehealth follow-ups for ADHD after the pandemic has ended. “Not for every visit — we do need to check them in person sometimes in person sometimes to monitor their growth and check vital signs — but at least a couple of times a year we can do it via telehealth. This is particularly helpful for college students living away from home.”

But, as with any innovation, improved access for some does not mean improved access for all. Mali and others are concerned that lack of broadband access and equipment is handicapping some children and families. “We notice this doing telemedicine where [the connection] is clear on our end, but the parents may have picked a lower price [internet] plan, and so it's really stuttery and not great for looking at rashes or other conditions.”

He is further concerned that this may exacerbate ADHD issues for lower-income families and increase the education gap. “When you're trying to do school and you're waiting for the wheel to turn because you have a five-year-old laptop working on a slow connection, and you're already distractible, you're going to run off and do something else.” Everyone wants to be certain the increase in telehealth access doesn’t broaden existing inequities in the healthcare marketplace.

Telehealth is here to stay

Regardless, providers agree that patients are not willing to go back to a world in which the default was always an in-person visit. “I don’t think we are ever going to go back,” says Mali. And consumer demand should drive the necessary changes in workflows and reimbursement that will allow telehealth to flourish.

Mali notes that “previously, if we saw a patient for a live visit, let’s say we’d make $85, but only $53 for a telehealth visit. We were incentivized. But with coronavirus, $53 looks a whole lot better than $0.” And many in healthcare hope telehealth and in-person reimbursement rates will get a lot closer post-COVID, and that looser restrictions on telehealth delivery will remain in place.

COVID-19 may well prove to be the tipping point for not only virtual visits, but a broader vision of telehealth. Mali indicates that his practice is considering an online ADHD tool that will collect symptom data between visits and send reports to the pediatrician — in large part because of the increased comfort with telehealth tools as a result of COVID-19. “I think that coronavirus is going to be the great accelerator for using telemed and these other tools,” he says. “And that's the way it's going to be now.” 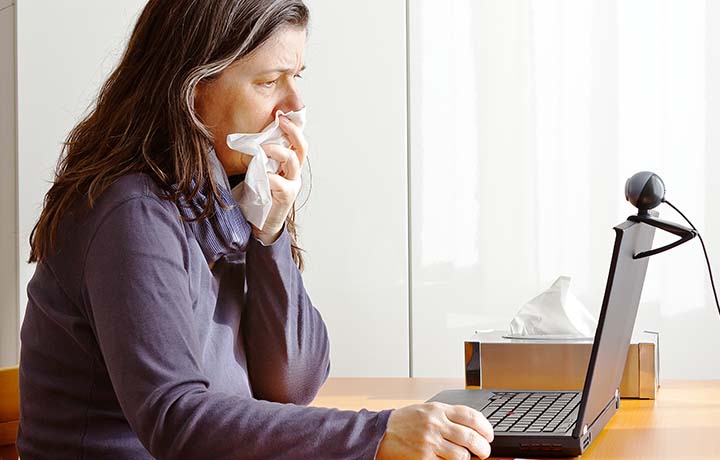 COVID-19 has driven the fast adoption of new technology to look out for patients', providers', and practices' health 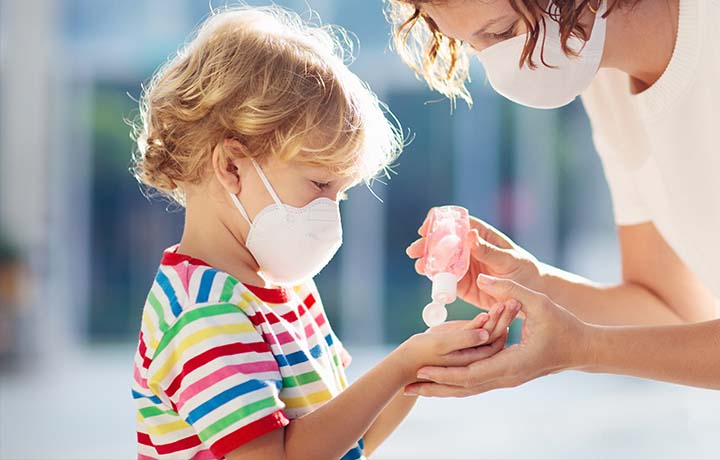 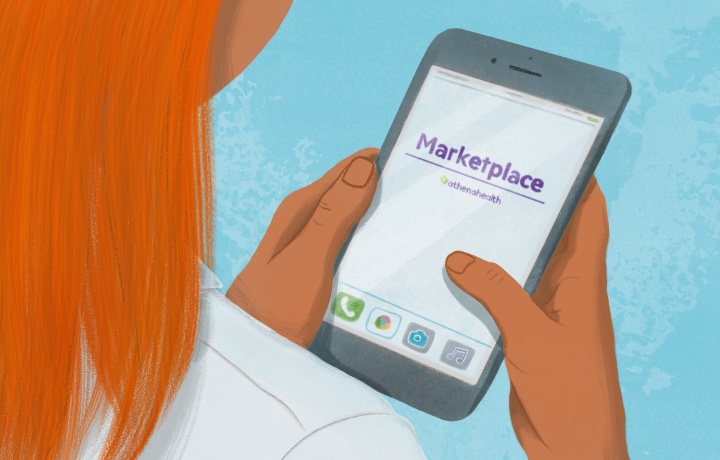 How healthcare organizations ramped up 24/7 telehealth access, in just 36 hours