Data from the athenahealth network suggest that while patients may be forgoing care for many conditions that require in-person visits, they are continuing to access mental health treatment at relatively higher rates, possibly from a distance. Data from the athenahealth network show mental health visits have risen significantly as a share of primary care coinciding with COVID-19 shelter-in-place directives. These findings were based on approximately 800,000 primary care visits per week, increasingly via telehealth, from February through early May 2020.

It is perhaps not surprising that the strongest trend indicates that anxiety diagnoses and related prescriptions took up a greater share of patient care in March, just as the COVID-19 lockdown really took hold and people began coming to terms with the new reality. 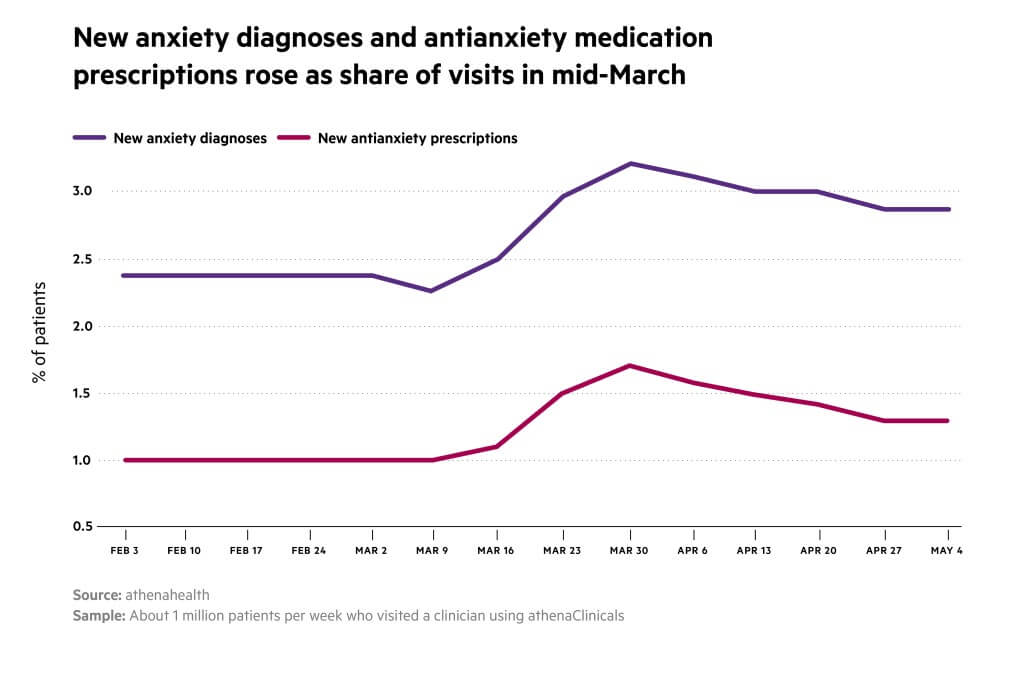 In the week of March 30, 3.3 percent of patients seen by athenahealth clinicians were newly diagnosed with anxiety, with 1.7 percent receiving a prescription for anti-anxiety medication. This was the culmination of an upward trend that began in mid-March 2020. Diagnoses and prescriptions for this same time period in 2019 were largely stable with no similar increase in March or April, and there is no similar increase in diagnosis rates for other conditions, such as diabetes and hypertension. Patients without a pressing need are likely opting not to see a physician right now, which makes the mental health care trend even more striking.

It is likely a sign of the kinds of visits that are actually happening and the increased reliance on telehealth visits. “It feels like I’m doing a higher percentage of mental health visits every day, because those are the easiest to do by telehealth and people aren’t being seen for other conditions,” says Sheri Zager, M.D., pediatrician at Pediatric Associates of North Atlanta, P.C.

The trend appears to be easing to some degree, which may indicate that patients are adjusting to the new normal or may simply mean that all those who planned to seek treatment for anxiety have already reached out to their providers. It may also suggest that other forms of care are beginning to bounce back.

Anecdotally, though, providers do feel it would be ill-advised to ignore the mental health impact of these trying times. Bernadette Sheridan, M.D., family physician at Grace Family Medical Practice in Brooklyn, warns that these issues will not go away quickly, noting, “My common sense tells me, the fire isn’t out just because the fire trucks have left the scene.”

The share of anxiety-related visits increased most for women

The biggest jump in share of patients receiving new anxiety diagnoses was among women aged 30 to 64. 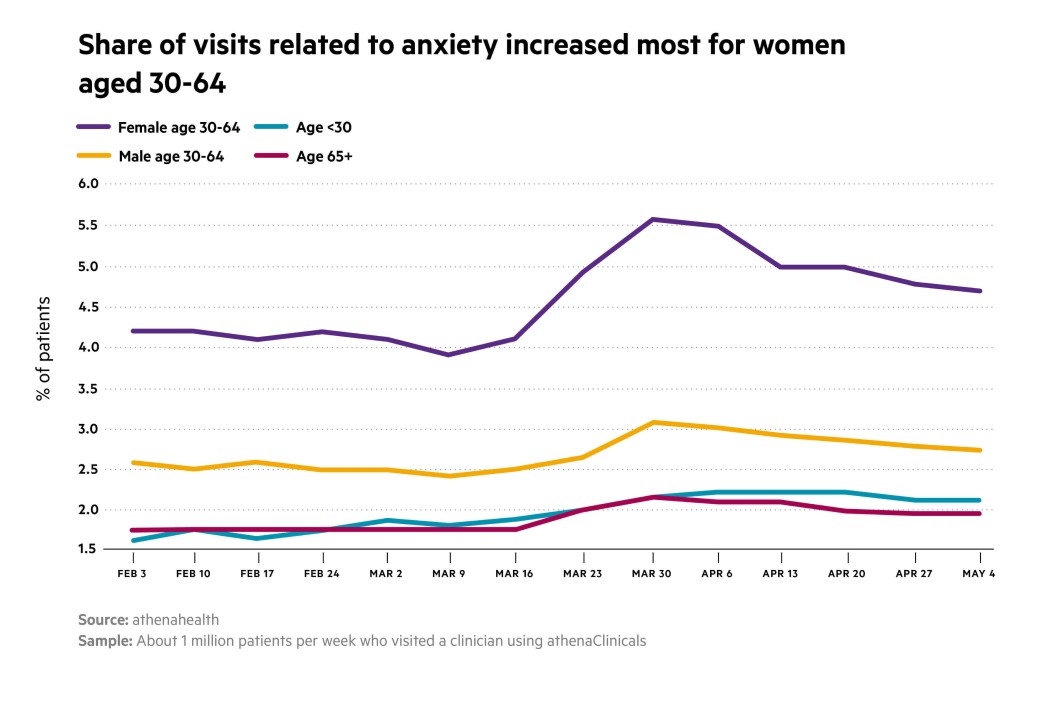 According to Sheridan, women seem to be both suffering anxiety at a higher rate and seeking care more often than their male counterparts. This may be because women were already struggling to balance work and family to a greater degree. Or it may be that women are feeling these changes more acutely, as Sheridan says, “Domestic violence is up; child abuse is up” — issues that disproportionately affect women. 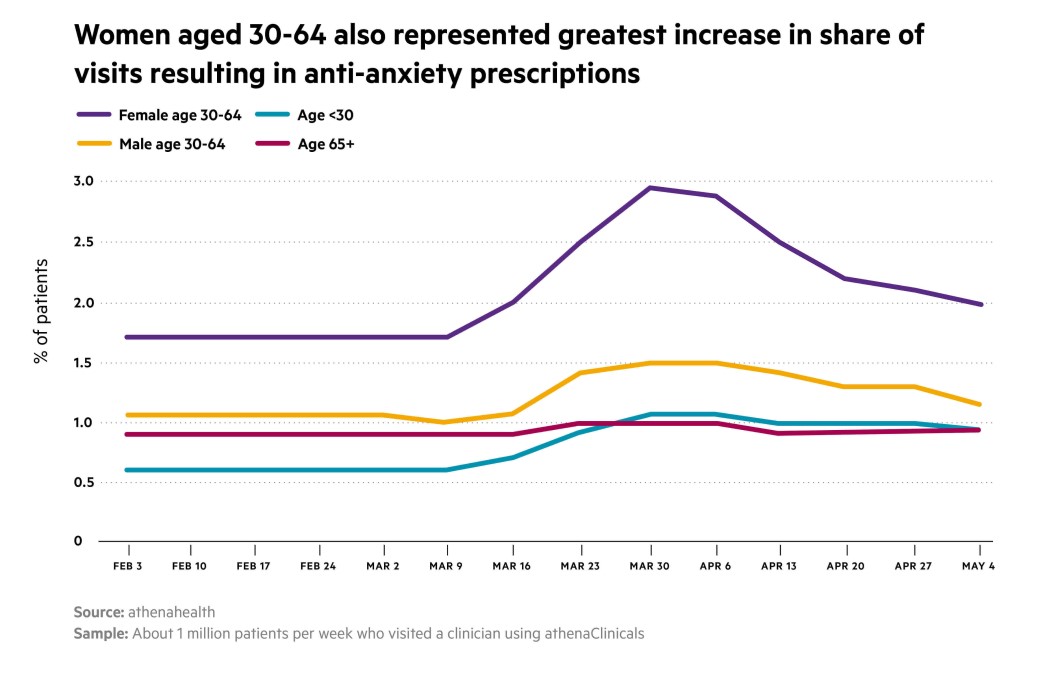 Looked at cumulatively over the course of the spring of 2020, this represents a significant increase in antianxiety medication among women seeking primary care, and it remains to be seen if they will continue treatment after the global pandemic has passed.

Sheridan says she asks herself, “Should I tell her to breathe or meditate, or should I give her 10 days of Xanax so she can calm down? I don’t do that lightly. I always try the non-pharmaceutical method first, but many patients are having full-blown panic attacks, not sleeping, feeling triggered – they need to lean on medication. But medication is a tool, not a solution.”

Children and teenagers previously diagnosed with depression relied heavily on their providers to help them with the impact of this crisis on their condition. March and early April saw a jump in kids and teens with an existing depression diagnosis bringing up depression with clinicians — a trend we do not see with adults. This suggests that parents are continuing to seek mental health care for their children even as they may put off treatment for physical conditions. Sheridan is not surprised, saying, “All the people who had mental health conditions before, it is more manifest now.” 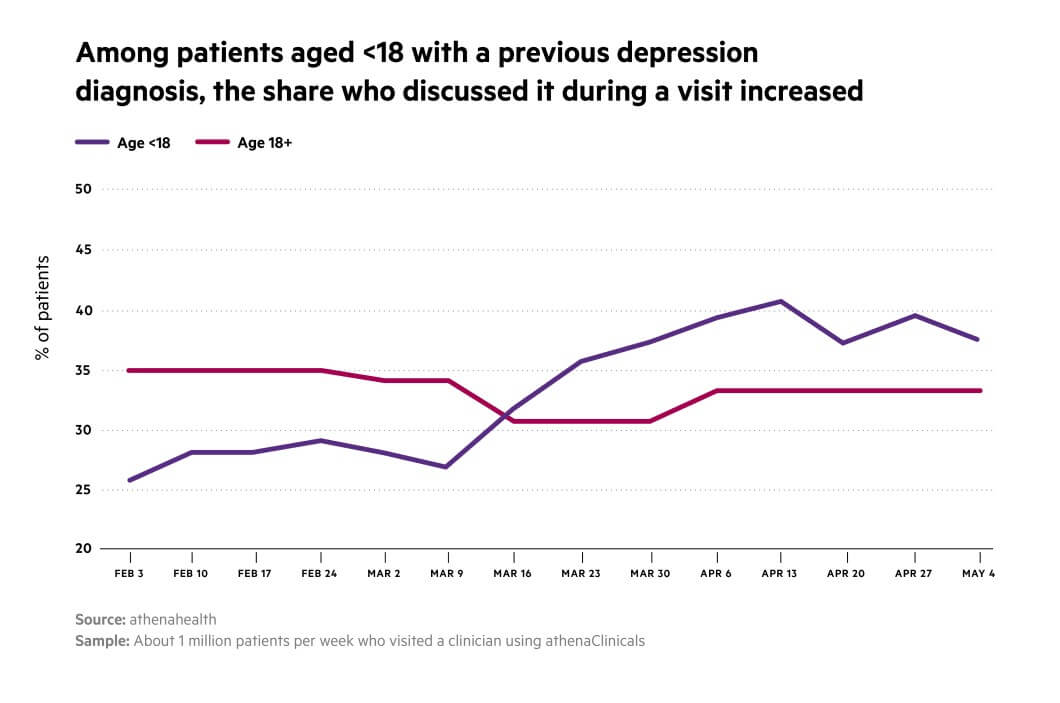 The percentage of patients raising the issue of their depression rose at a steadily increasing rate for visits throughout March and April, peaking during the week of April 13, when 41 percent of patients under 18 diagnosed with depression were seeking out support from providers.

Given that trend, it is not surprising that patients under 18 (or their caregivers) were especially diligent about renewing their anti-depressant prescriptions during the time period corresponding with the COVID-19 lockdown. 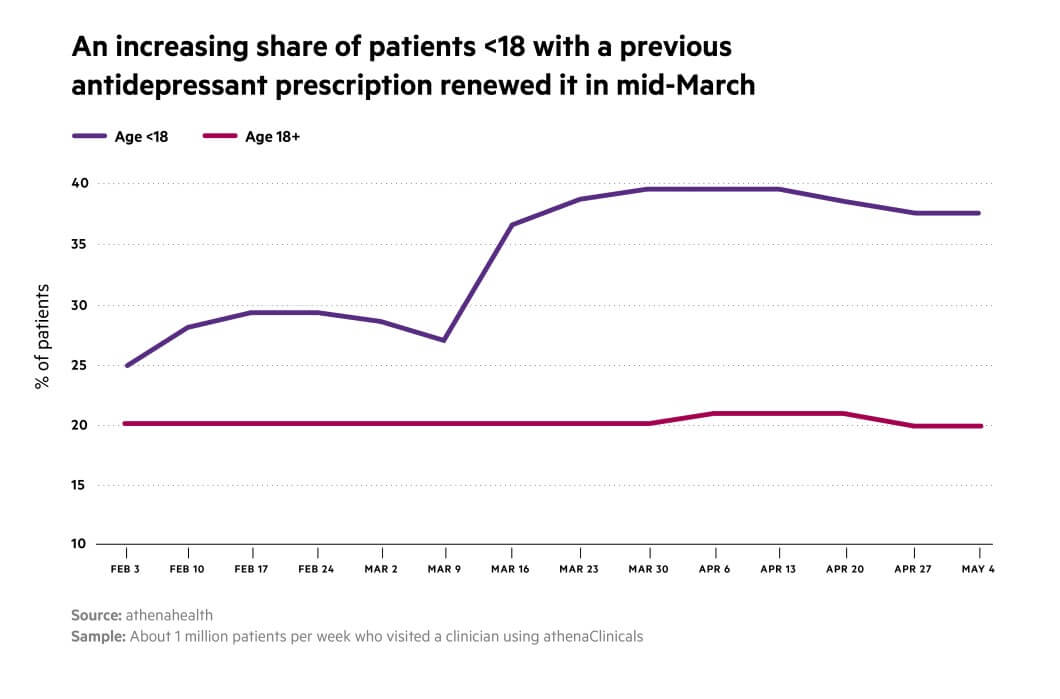 Another factor may simply be availability and access. “The fact that everybody is home and able to do telehealth appointments means that more of them are doing the follow-up they are always supposed to do,” says Sheri Zager, M.D., pediatrician at Pediatric Associates of North Atlanta, P.C.

She also notes that parents being home 24/7 provides more opportunity to observe their children and notice the signs and symptoms of depression, possibly spurring them to seek treatment. This may explain why athenahealth data also saw an increase in the percentage of visits resulting in new anti-depressant prescriptions for teenagers in mid-March.

Anecdotal evidence indicates that teens in particular are suffering from the lack of social connections and activities that are typically such a big part of their lives. “They are such social creatures,” says Zager, “it weighs heavily on them when they can’t be out with their friends.”

Additionally, many teens face the loss of time-honored rituals like prom and graduation, which cannot be recaptured. “So many have been preparing for their final sports season or end-of-year performances, all of which have been cancelled,” observes Zager, “and for a lot of kids who already have a bit of a tendency to be anxious or depressed, it’s the kind of thing that can really push them over.”

Combined with the stress of adjusting to online learning and dealing with high school and college applications during a pandemic, it is no wonder teens may be feeling the impact of COVID-19 more than many adults.

It is interesting to note this increase in mental health diagnoses and prescriptions as a share of visits occurred during a time when almost no practices were conducting non-emergent, in-person visits. It is highly likely that many of these diagnoses occurred virtually using telehealth tools.

This may also be a sign of just how well mental health care lends itself to telehealth, a likely reason why mental health visits were such a large percentage of visits during the pandemic while patients delayed or decided to forgo treatment for other conditions.

Mental health care has always been a particularly strong use case for telehealth, since mental health visits usually don’t necessitate a complete physical examination of the patient. The current situation highlights how useful a tool this may be for mental health services going forward, especially once patients return to work and school, and making time for regular in-person visits becomes more difficult.

“We had already been discussing how to introduce telemedicine to our practice,” says Zager. “This pandemic has forced us to implement this rather suddenly, and I think it is something we will continue in the future.”

Lia Novotny is a contributing editor to athenahealth's Knowledge Hub. 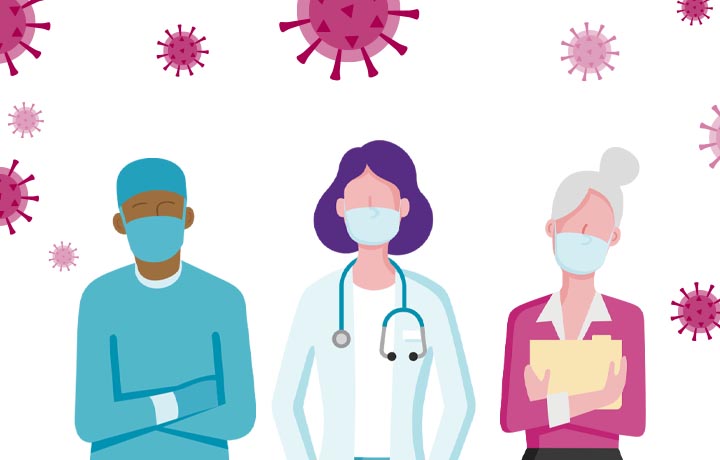 Provider safety during a pandemic 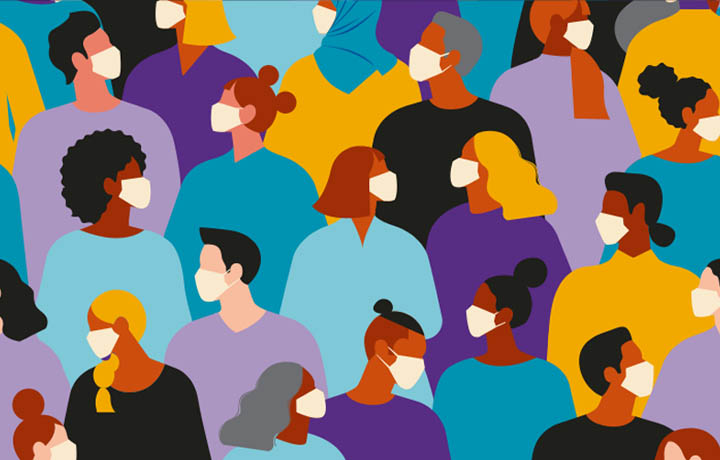 How COVID-19 is changing the practice of medicine