And those conversations can keep community hospitals going strong, too.

When Horizon Health needed to extend its reach – and its reputation – beyond the city of Paris, where its flagship community hospital sits in eastern Illinois, it turned to Jessi Cummins, an office assistant at the hospital.

“We're talking about really small towns. We're talking about towns that don't have newspapers," says Erin Frank, marketing director of Horizon Health. “We want to have events like our Back-to-School Bang come up in conversation with moms as they're picking up at cheerleading practice. Those places aren't reachable unless you're immersed in that."

So Cummins joined Horizon's volunteer community liaison program. She lives in Brocton, a village 20 miles from Paris, where she's got kids in school and deep roots in the community, perfectly positioned to be a two-way conduit of information between Horizon and local families. Whenever the opportunity arises, she lets other parents, friends, and neighbors know about the services and events at Horizon's hospital and clinics — and she keeps Horizon informed on Brocton's needs and concerns.

Horizon's liaison program is an economic and effective model of the kind of community engagement on which value-based care and population health depend. And it is among the many lessons that community hospitals offer for health systems of all sizes: Healthcare delivery depends on trust and relationships.

Here's how thriving rural hospitals are engaging their communities to keep their patients healthier — and keep their doors open.

Small hospitals can “turn on dime," says Trampas Hutches, CEO of Melissa Memorial Hospital (MMH) in rural Colorado. That flexibility – a distinct advantage over large hospitals and health systems – means MMH can mold its services and facilities to meet the unique needs of its populations.

“As rural hospitals," says Hutches, “we have an opportunity to be everything and anything as long as a community has a need."

At MMH, that meant services for an aging population: joint replacement and transition-of-care programs, cataract surgical service, a retail pharmacy, an optometrist, a dentist, Medicare annual wellness visits, and ambulance and helicopter services. The result? A hospital system that meets tiny Holyoke's size and needs precisely.

In Illinois, Horizon Health needed to recognize – and work with – hometown pride to build trust in and awareness of its services, a particular challenge for the organization previously known as Paris Community Hospital/Family Medical Center. Says Frank, “As our footprint grew, we identified what we call a 'Friday Night Lights' issue — having the name 'Paris' on everything. These small towns are prideful, and they don't always take to having their competitors for high school sports and jobs putting their names on the signs in their community." 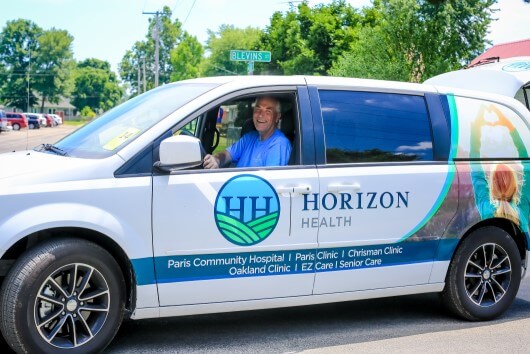 So, after launching the community liaison program, the organization realized it first needed to change its name to find acceptance across the region and its network of clinics. Now Horizon Health – not Paris Hospital – drives its branded minivan in Independence Day parades, hands out earplugs at county fair demolition derbies, and sends its athletic trainers to high school football games.

To build trust in Holyoke, Colorado, Trampas Hutches needed to increase his own visibility as well as his hospital's. “The community wants to see its hospital CEO and physicians out in the community. It was real simple for me because I have kids. So I'm at basketball games, the movie theater, Booster Club and Lions Club meetings, the fundraisers, all those things." Also an elected member of the local school board, Hutches has seen brand recognition of Melissa Memorial increase by 42 percent since he stepped into the CEO position in 2016.

Gaining trust, however, is never more essential than when a hospital's survival is on the line. Joshua Gilmore arrived in Pilot Knob, Missouri in 2017 as CEO of Iron County Medical Center, a critical access hospital on the verge of bankruptcy. After publicly presenting its financial predicament at town hall meetings, he says, “I had individuals who were most frustrated come up to me and say, 'We've never had a conversation like this before and appreciate the opportunity to know what is going on.' Then I could say, 'Let's work together to fix it.'"

As a designated “special district" in Colorado, Melissa Memorial Hospital receives tax revenue from the community and so, says Hutches, “I make sure we give a little back, even if we're in the red. It's something we should be doing because we're a community hospital." In 2017, MMH donated to 69 organizations in its area, and twice a year the employees fill a room with in-kind donations for the food pantry.

In central Illinois, Gibson Area Hospital and Health Services is everywhere. A thriving regional health system with nine clinics along with the community hospital, Gibson is immersed in community life. “We support really anything dealing with the elderly and healthcare or kids," says CEO Rob Schmitt.

“Recently, one of our school districts was canceling its field trips because funds are tight. Well, I remember growing up, the field trip was the highlight of the year, right? So, I called the superintendent and I said, 'I'll sponsor the field trips. The kids should have field trips. What do you need?' It was a small amount of money, but it's such an important thing for the kids to experience."

And every year, along with field trips to the zoo, the schools bring students to tour Gibson Area Hospital. “You can ask the kids, 'How many of you were born here?'" says Schmitt, “and they all raise their hands."

Gibson's investment in the well-being of its region goes beyond philanthropy to a new business, Elite Sport and Fitness. Begun in the basement of its physical therapy building for a small group of local athletes in 2014, the program grew quickly, and Gibson opened it to the community at large at four locations in surrounding towns. "We have customers as young as six and as old as 90 just trying to be fit and healthy," says Schmitt.

Why is a hospital operating a fitness club? As a self-insured organization, "We want our staff to be healthy and not cost us a lot of money," says Schmitt, "but if we're really going to held responsible for making sure all our patients are healthy — and eventually that's what we're all going to be paid for — then we're going to have some kind of service like this."

Whether building gyms or joint-replacement services, these hospitals' deep roots and connections to the people they serve both form and fuel their operations. And as U.S. healthcare explores new ways to deliver care that meets the precise needs of specific populations, the map forward may already be drawn by community hospitals.

What is your waiting room saying to patients?