“We have good patient support and good provider support, and I think that makes a difference," Harris says.

A new analysis of data from athenahealth, in fact, shows that such support really does make a difference — and not only for physicians, but their practices as well.

Burnout, of course, can be expensive for organizations, especially when it results in physicians deciding to leave. The American Medical Association has estimated that the costs associated with physician turnover can range from $500,000 to $1 million or more per doctor. That includes the direct costs of things like lost revenue and the expenses related to recruitment of replacements, but it also includes possible indirect costs, like the hit an organization might take to its reputation and the potential for increased patient attrition.

With that in mind, in 2018 athenahealth researchers distributed a survey to nearly 1,400 practicing physicians to determine the biggest factors impacting turnover. The survey consisted of 70 questions that touched on all aspects of professional satisfaction, from the loyalty physicians feel to their current organizations to their sense of fulfillment and how often they feel rushed. The results reveal much about how individual physicians' work environments influenced their intent to leave. 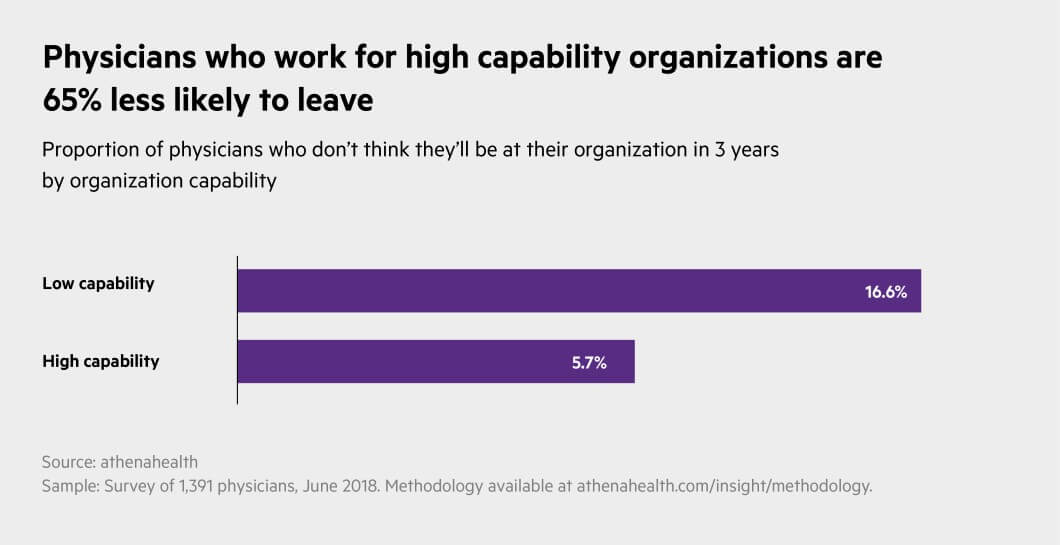 Doctors, for example, who worked for “high-capability" organizations — practices that offered the tools and latitude they needed in order to provide patients quality care — were 65 percent less likely to consider leaving than those who did not.

Similarly, physicians who felt rushed at least once a week were 33 percent more likely than their less-harried colleagues to look for employment elsewhere. 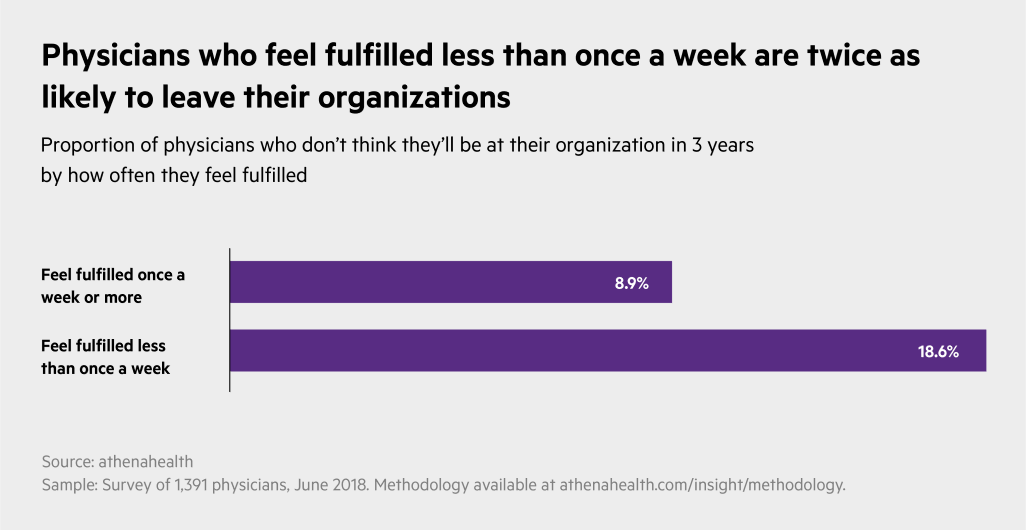 Another motivating factor for physicians is how fulfilled they feel at work, which can come from ongoing relationships with patients, positive professional relationships with colleagues, and personal autonomy. Physicians who felt fulfilled less than once a week were twice as likely to leave than those who experienced fulfillment once per week or more.

Finally, the survey found a direct correlation between burnout and a doctor's staying power at an organization. The survey included questions like, “How often do you feel burned out from your work?" and “How often do you feel that you've become more callous toward people since you took this job?" Those with any signs of burnout said they felt burned out or callous at least once a week, while those with significant signs of burnout had these feelings a few times per week or more. 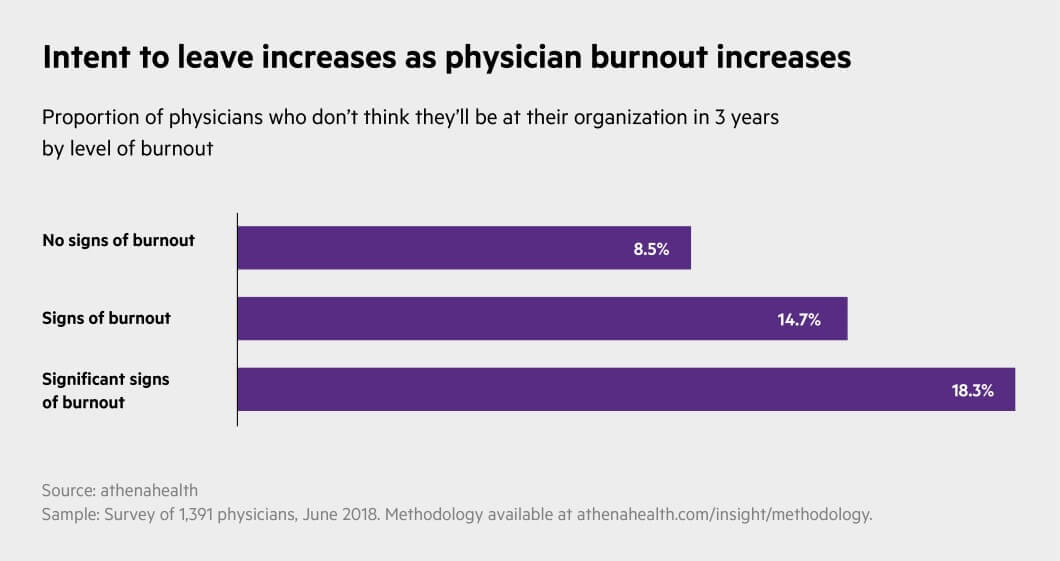 While only about 9 percent of physicians with no signs of burnout were considering leaving their practices, those with any signs of burnout and “significant signs" of burnout planned to leave at rates of 15 and 18 percent respectively.

The real key to keeping physicians fulfilled and loyal is a positive administration that emphasizes open communication, flexibility, and internal support of its staff. According to the survey, physicians who are happy with the leadership and communication at their organization are 45 percent less likely to show signs of burnout and twice as likely to be satisfied with their jobs. 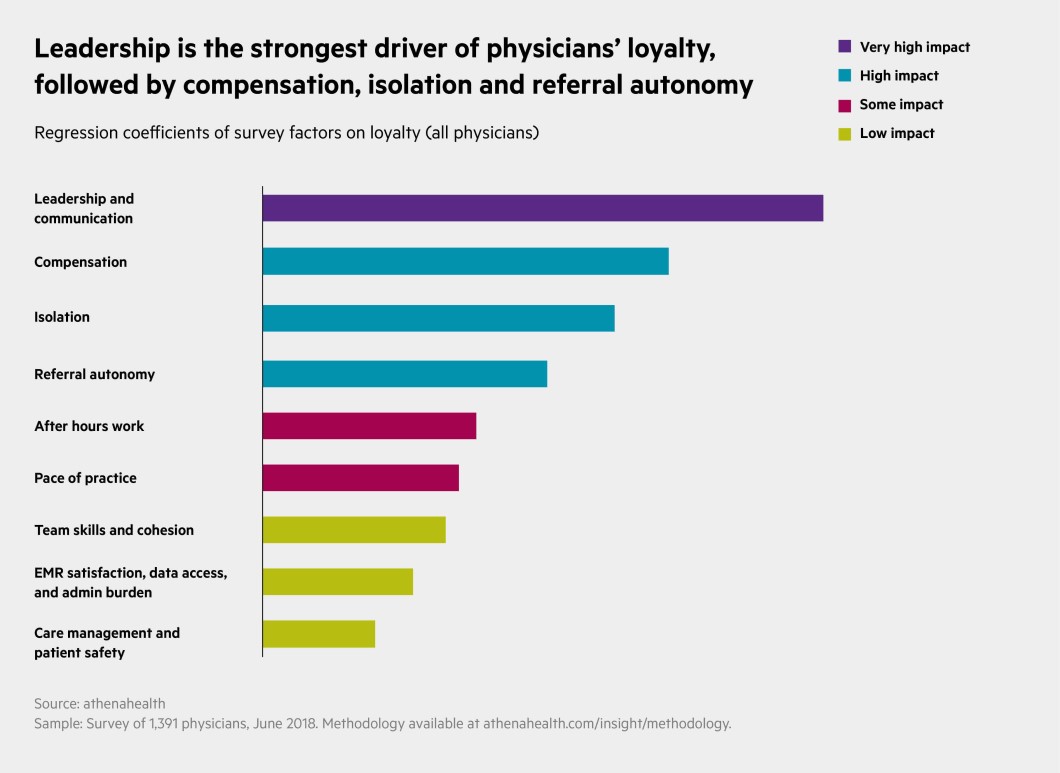 This factor far and away outstripped variables like compensation and after-hours work, suggesting that practices should prioritize leadership development at least as much as any tangible programmatic changes designed to increase physician retention.

At his organization, Harris notes, the leadership has been exceptionally strong, and open communication is welcome and expected. A staff physician at a busy community hospital affiliated with MultiCare Regional Cancer Center in Tacoma, Washington, he says his employer has taken several steps to minimize physician burnout, such as introducing a new mindfulness program for doctors and permitting more flexibility in doctors' schedules.

Harris now works four days a week and sees around 200 patients per month. He's also learned to relax with deep-breathing techniques before he sees his most challenging patients, and he tries not to look at the computer during appointments as part of an effort to help patients feel at ease.

A few years ago, Harris recalls, he was the “busiest guy" at his facility, seeing around 60 patients per week. He soon realized that wasn't sustainable and he was headed for burnout. The supportive leadership at his organization made it easy for Harris to adjust his practice so he no longer felt “constantly under the gun." He's going to stop work eventually, he says, but when he leaves it probably won't be because he can no longer take the pressure. Instead, he predicts, he'll retire when the time is right. He'll do it of his own accord.