What innovations drive success in healthcare? Here's a tactic from a leading healthcare organization.

While the opioid crisis has hit hardest in America's rural communities, just 2 percent of providers are certified to deliver medication-assisted therapy (MAT) practice in those regions.

So it was no surprise that when its MAT provider retired in 2015, Wells House, a residential treatment center for substance-abuse disorders in rural Maryland, could not find a replacement. The staff immediately began to see patients drop out and overdoses rise.

Wells House called Eric Weintraub, M.D., associate professor in the Department of Psychiatry at the University of Maryland School of Medicine, to ask his help in finding a new MAT provider.

Instead, he offered an alternative: UMMC's existing telemedicine platform. The MAT-certified providers on his team could manage buprenorphine treatment of patients at Wells House virtually from Baltimore.

Working within the guidelines of the federal Ryan-Haight Act which required an initial in-person visit with patients before prescribing a controlled substance, Weintraub and his team developed a shared-care protocol that put telemedicine visits at the core of care plans. And, in October 2017, that restriction was waived for this patient population when the Secretary of Health and Human Services declared the opioid crisis a public health emergency, easing the way for all healthcare organizations to take this approach.

Weintraub and Wells House launched their collaboration by meeting with local pharmacies to establish relationships and developed forms to standardize patient information. “If we were going to do this," says Weintraub, “we wanted to provide the same quality of care that we do when we are seeing people in our office."

Each day, the program coordinator at Wells House emails Weintraub the schedule and patient list for the following day, including each patient's urine toxicology results and notes from their counselors. Then, residential patients meet with their UMMC doctor via video conference, and fill their prescriptions locally. When they transition to outpatient treatment, patients return to Wells House for their telemedicine appointments.

The solution “made sense to us, because buprenorphine works, and there was literature that telemedicine works," says Weintraub, “but the two hadn't been put together."

Among the first 175 Wells House patients receiving MAT by telehealth technology since August 2015, 60 percent were still in treatment at the 3-month mark, and 94 percent of those tested negative for opiates

The program has been so successful it has expanded to surrounding counties with the support of local health departments. And UMMC team recently received a grant from the Robert Wood Johnson Clinical Scholars program to expand the program.

“We're filling a void – there aren't enough treatment providers," says Weintraub. “Without us being there, there could have been more overdose deaths, more acute hospitalizations, more hepatitis, all sorts of downstream issues."

Instead, “a lot of our patients end up getting jobs and working, taking care of their families and doing all the good things they're supposed to be doing."

Lia Novotny is a frequent contributor to athenaInsight. Artwork by Molly Ferguson. 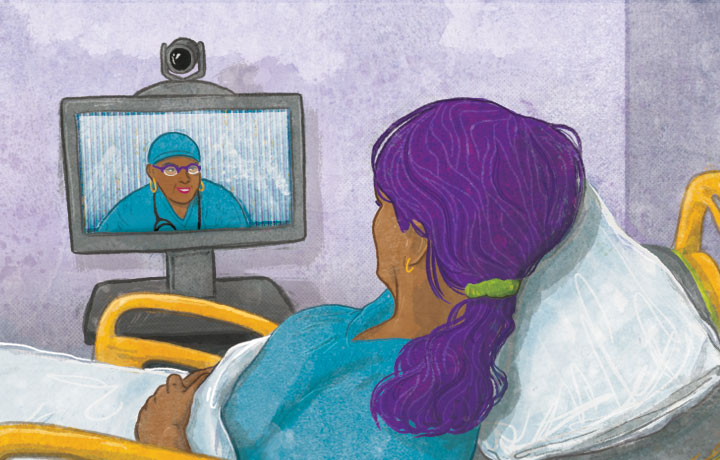 3-minute case study: The doctor will chatbot you now