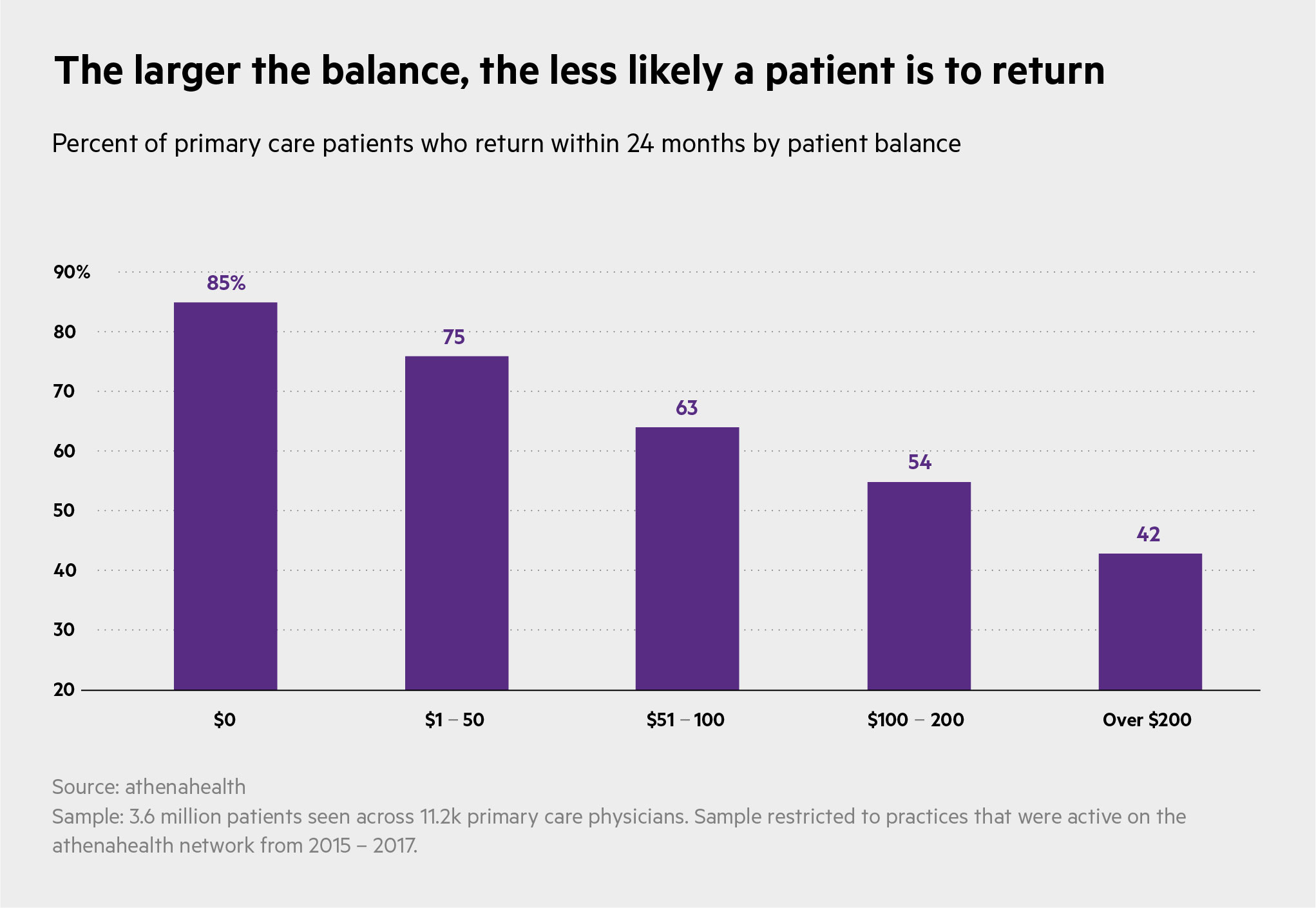 The good news is that practices can benefit when they're proactive and willing to work out a plan, especially before the debt climbs. Armed with education and empathy, they can get paid more than they think, keeping patients – and finances – healthy.

Patients “just assume that their insurance is going to take care of them," says Eli Wagner, director of operations at Integrity Family Care in Madison, Alabama. “They don't understand the details of their policy, and that some policies are great and some of them are pretty bad."

Integrity, an eight-provider practice, has its medical coders comb for larger unpaid claims. When they find balances over $200, insurance errors, such as incorrect coding or system malfunctions, are the most likely culprits.

If resubmitting the claim doesn't work, medical billers reach out to the patients who, sometimes, aren't even aware of their outstanding balances. Others know, but don't understand why they owe money.

Instead of insisting on payment right away, the billers ask questions:

Going into the discussion with questions instead of demands keeps patients on the line and yields answers – and often payment.

“It's more about us partnering with them on understanding why they owe it," says Wagner. “When they get it, they're like, 'Okay, yup, here you go.'"

What if a patient is simply unable to pay? For long-term patients without prior billing issues, Integrity is often willing to arrange a payment plan. And if that doesn't work? The relationship comes to an end – unless one last effort works.

“There has got to be a point where you hold [patients] accountable for what the policy is," says Wagner. “It's just explaining to them very clearly: We will not see you again; you cannot come through the door to see your provider until your balance is paid. And all of a sudden they pay their balance."

Things rarely get to this point, however, thanks to what Wagner calls “an educator's heart."

It's tougher for orthopedics

The life-and-death stakes of cardiology practices keep most patients coming back even when they have balances. But, data show, orthopedic practices' return rates drop 45 percentage points once balances exceed $200. 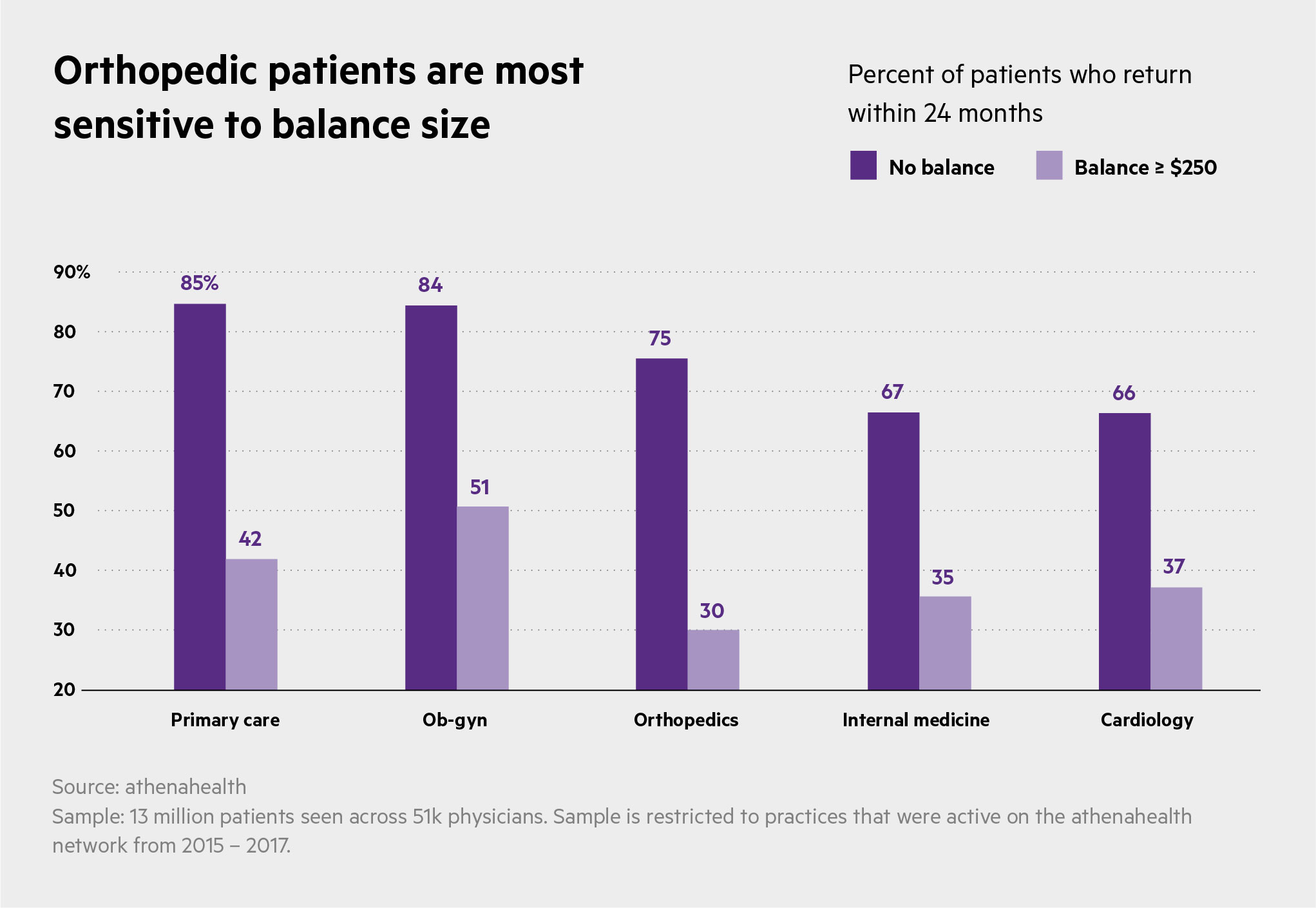 So orthopedic practices have to work a little harder to get paid.

“We really strive. We use the automatic credit card payment plans that charge them money," says Jamie Fulmer, practice manager at Orthopedic Foot and Ankle Institute in Henderson, Nevada. “If we don't collect their balance by the time they're gone, they definitely are never going to pay us."

Orthopedic patients in particular tend to weigh unpaid balances against physical pain. If an injury has healed somewhat, patients may decide living with it hurts less than admitting they can't pay. And since orthopedic treatment is already time-limited, patients may not develop the relationships or sense of loyalty seen in primary care.

As in primary care, though, long-term patients can qualify for payment plans. Starting with a maximum reasonable amount – say, $100 a month – the staff will negotiate back and forth with the patient until they settle on an agreement. Everyone wins: The practice gets paid at least partially, the patient receives care, and the relationship is maintained.

“I think it says a lot that you care about your doctor, and the services they're providing, and want them to get paid. To me, I don't mind if patients have large balances, as long as they're making an effort to pay."

Education is still key, though. With the rise of high-deductible insurance plans, many patients still don't realize that their providers don't get paid until the deductible does. Front desk staff may have to take the time to explain insurance allowables before setting up payment plans.

Orthopedic Foot & Ankle will also call patients who have balances before their next appointment. Sometimes, payment is as simple as rescheduling for a date after the next payday.

“People might have hard times, but as long as they're making an effort to pay you, you have to settle for a little less than you would actually like," says Fulmer. “At the heart of it, we want to take care of these patients." 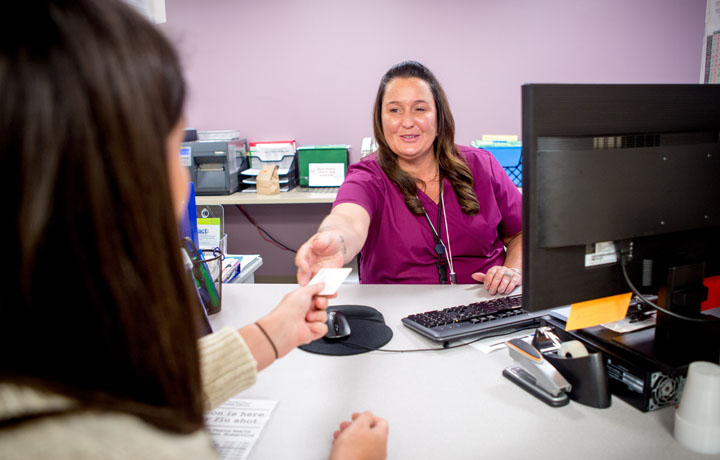