While public health campaigns like American Heart Month have succeeded at shining a spotlight on the perils of heart disease, there’s one key message about cardiac conditions that doesn’t seem to be getting across. Although heart disease, as the Centers for Disease Control puts it, “is sometimes thought of as a man’s disease,” when it comes to mortality rates, men and women are almost equally affected.

In the United States 1 in 5 women will die from heart disease, but only around half are aware that it may pose a significant threat to their life, the CDC notes. The result is that many women who experience a heart attack don’t recognize their symptoms for what they are. And many others postpone getting treatment—often to the point where their care comes too late.

In early 2022, athenahealth researchers studied de-identified network data to determine whether those delays in care were further exacerbated during the pandemic. Has care management for those with heart disease or those at-risk – which often requires multiple appointments a year – been pushed out or delayed, due to possible COVID-19 exposure fears? And given that the pandemic has has increasingly led many women in particular to put their family’s needs over their own, how have they handled their heart-related care?

The athenahealth Research & Insights team found several noteworthy differences between genders and races in their study.

“What we found was that across both cohorts, male patients were far more likely than their female counterparts to return to their clinician the following year,” says Janvi Nerurkar, athenahealth quantitative research manager. 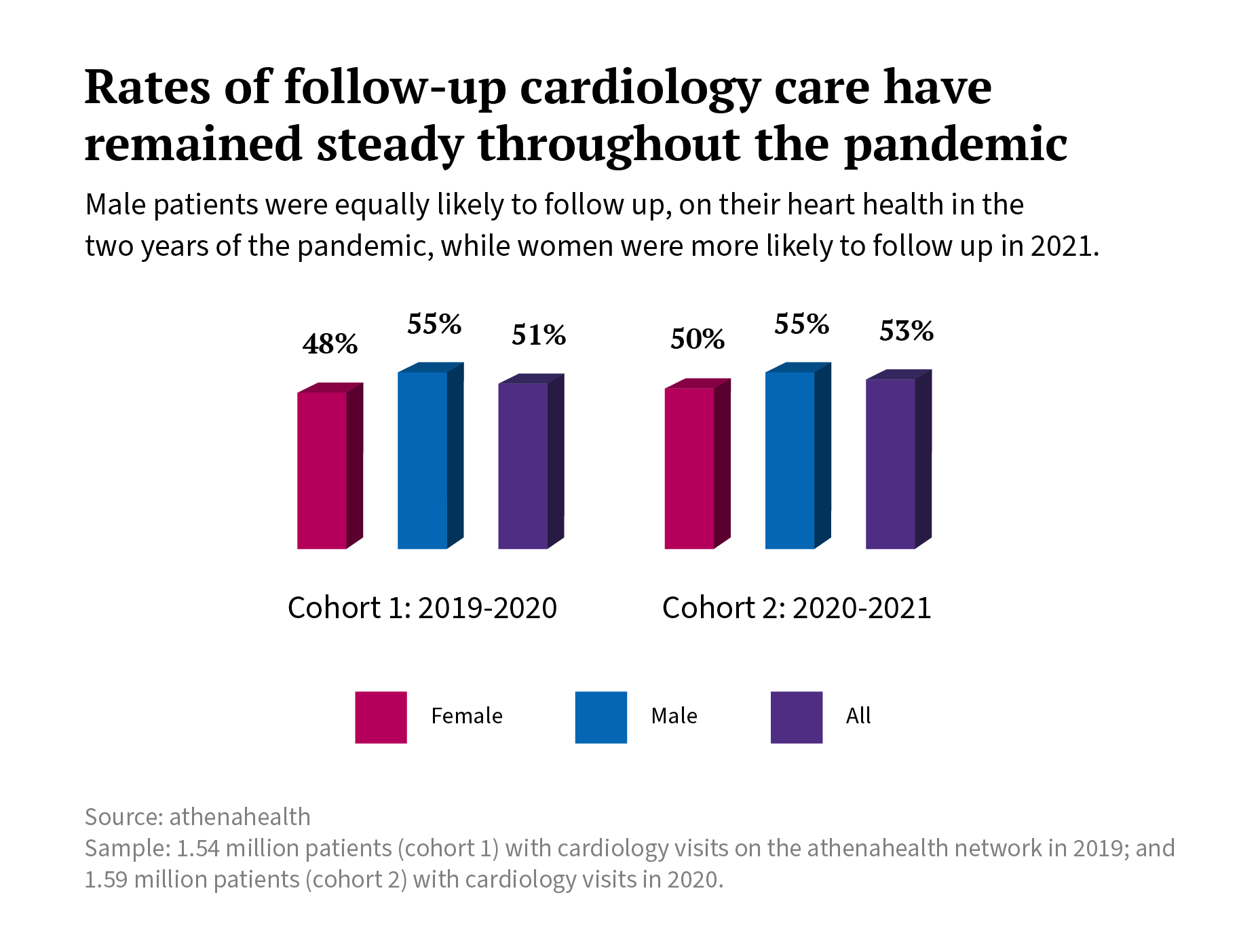 And among the 58 percent of patients in the first cohort who followed up with visits in 2020 or 2021? In line with the rest of the findings, males were again more likely to have done so than their female counterparts (61 percent vs. 56 percent). They were also more likely to have visits in both 2020 and 2021, while women were slightly more likely to skip their 2020 follow-up visit and wait to follow up until 2021. “The interesting thing is, this differs from other research we’ve seen that has demonstrated males tend to be less compliant to healthcare in general,” Nerurkar says. “Our data show that it’s possible this pattern reverses when it comes to heart health.”

An athenahealth-commissioned survey conducted in February 2022 by the research firm Dynata supports these findings. Of note: Among the 34 percent of the 1,000 respondents who said they had been diagnosed with a heart condition, 38 percent said they’d skipped some or all of their doctor’s recommended heart-disease related appointments. The survey also found that men were more likely than women—12 percent vs. 9 percent—to attend scheduled appointments. 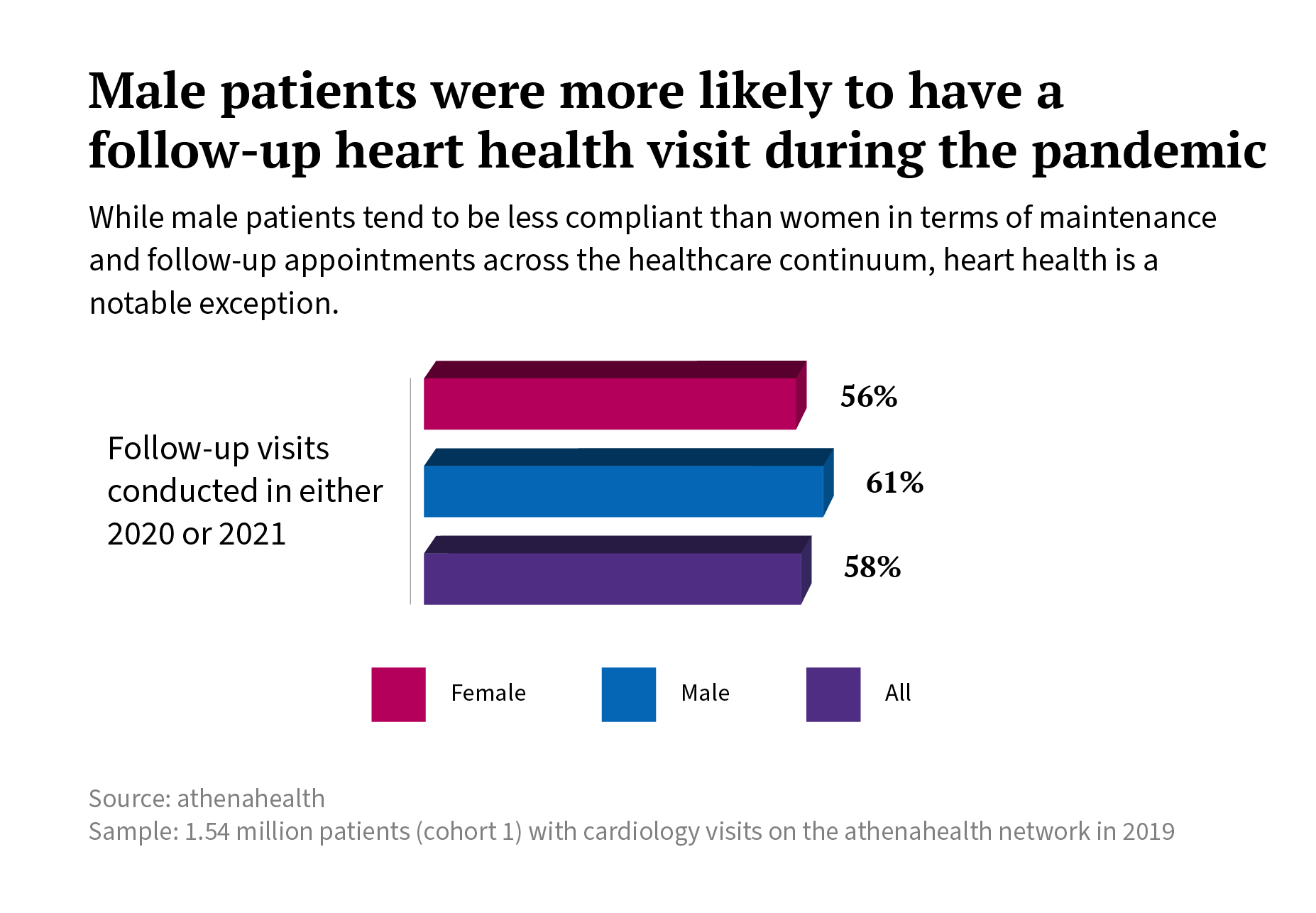 The team’s findings around gender differences in follow-up rates held true regardless of race or ethnicity, but the percentage gap was broader among Asian and white patients than it was for Black or Hispanic/Latino patients. Asian women in the first cohort, for example, followed up at a rate of 40 percent, while 48 percent of Asian men did so during the same one-year period. Among Black patients, meanwhile, the follow-up rate in 2020 for those who had cardiology visits in 2019 was 47 percent for women and 49 percent for men. 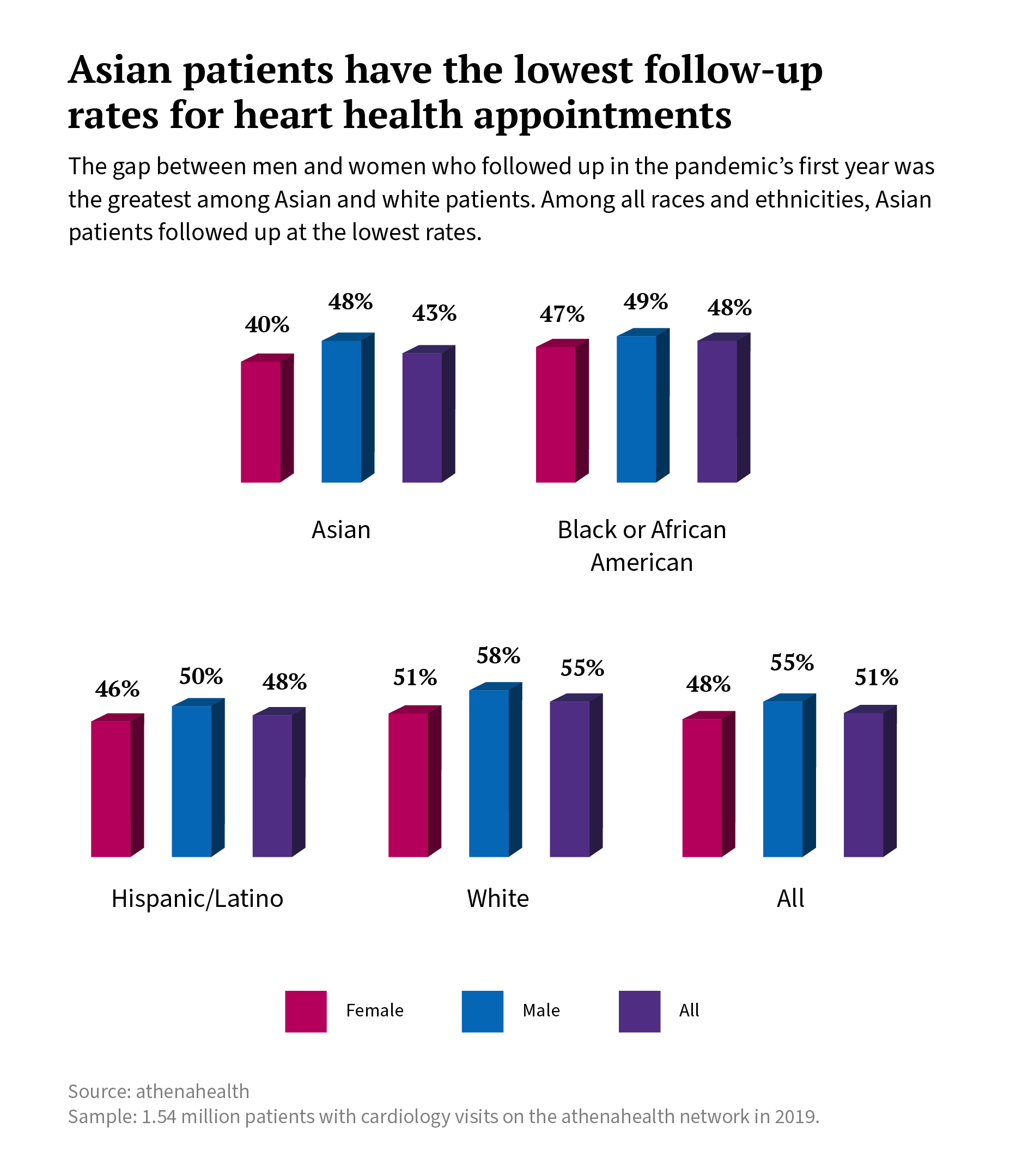 In both cohorts, notes Dani Bradley, a senior manager with athenahealth Research & Insights who co-authored her team’s report, Asian patients—and especially Asian women—were less likely than anyone else to go to a follow-up cardiology appointment. That trend has an inverse relationship to race-stratified heart disease death rates, as reported by the CDC. White patients, who follow up at the highest rates, are most likely to die from heart disease; Asian patients, who follow up the least, are least likely across all races to die from a cardiac condition.

The more at risk someone is for dying, “the more apt they are to go to their appointment,” Bradley explains. “That may say something about the perceived, or real, race-based risk of heart disease impacting individuals’ decisions around managing their heart health.”

As far as explanations for their gender-related findings, Bradley and Nerurkar point to a host of surveys and research. These vary from studies surrounding the role of cardiovascular health in the sex hormone levels of older men, to the gender and racial make-up of cardiologists themselves. Ninety-three percent of cardiologists are white, and fewer than 15 percent of practicing cardiologists are women. Some broader healthcare studies even suggest that more than half of women prefer being treated by a female clinician.

Awareness has much to do with heart health, added Bradley and Nerurkar, but it doesn’t seem that the pandemic itself has prevented women—or men—from seeking care. Though some survey respondents did report augmenting (virtual) or rescheduling visits during the early days of the pandemic.

So, what can cardiologists do to convince women and patients of all backgrounds that heart disease is something that’s worth a follow up? According to one long-time practice manager, it’s all about meeting patients where they are.

“Education about symptoms is important, but you also have to make care convenient,” says Sarah Ehlert, who until recently managed a heart clinic in Wisconsin.

Ehlert says her former practice used phone calls, handouts and flyers, and posts on social media to let people know that heart disease is not just a problem for men. They also provide preventative screenings, and offer appointments outside of regular working hours.

Most important, though, the practice strives to make patients comfortable during their visits “by keeping it a relaxed and friendly environment,” Ehlert says. “When you show compassion and show that you care, that’s when they want to come back.”