“I’m an optimistic person,” he said in an interview that touched on everything from staffing shortages to the use of technology in patient care. “I think that those in my generation and younger can make change in the healthcare system as we know it, when they become higher-ups and have more influence on the decision-making process.”

Reed’s thoughts are consistent with the findings of a new athenahealth survey that revealed younger physicians are generally more positive about the direction the healthcare industry is headed. Conducted virtually in January 2022, the poll sought to gauge physician sentiment regarding their experience and the challenges they face in daily practice. Respondents—743 physicians in all—included primary care physicians and specialists who work a minimum of 20 hours per week using a wide variety of EHR vendors. They were asked to rate their level of agreement or disagreement with a positive outlook on the future of healthcare, using a five item scale. Those responses were split into optimist and pessimists categories.

Overall, the survey found that physicians are nearly split down the middle when it comes to their feelings on the prospects for U.S. healthcare. And while most said they have significant concerns about issues like burnout and increasing administrative burdens, many—echoing Brandon Reed—also express confidence that things will improve.

Big picture: Sentiment is mixed, but physicians like their jobs

While only about half of the physicians polled said they were optimistic about the future of healthcare, most say they are happy in their current organization. Nearly 8 in 10 participants, for example, feel that their practice recognizes their contribution to its success, and a similar percentage said they have no plans to switch jobs in the near future. 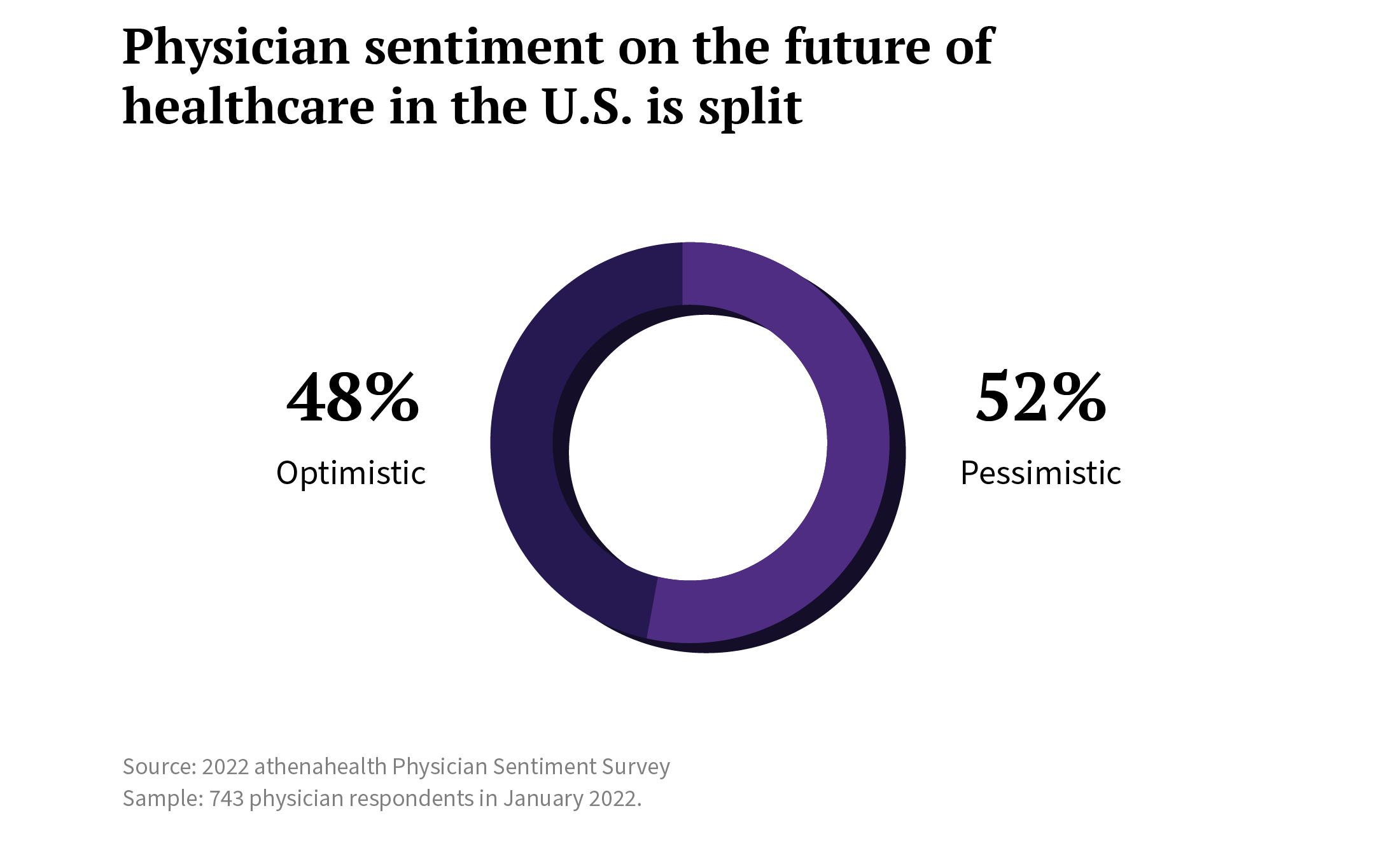 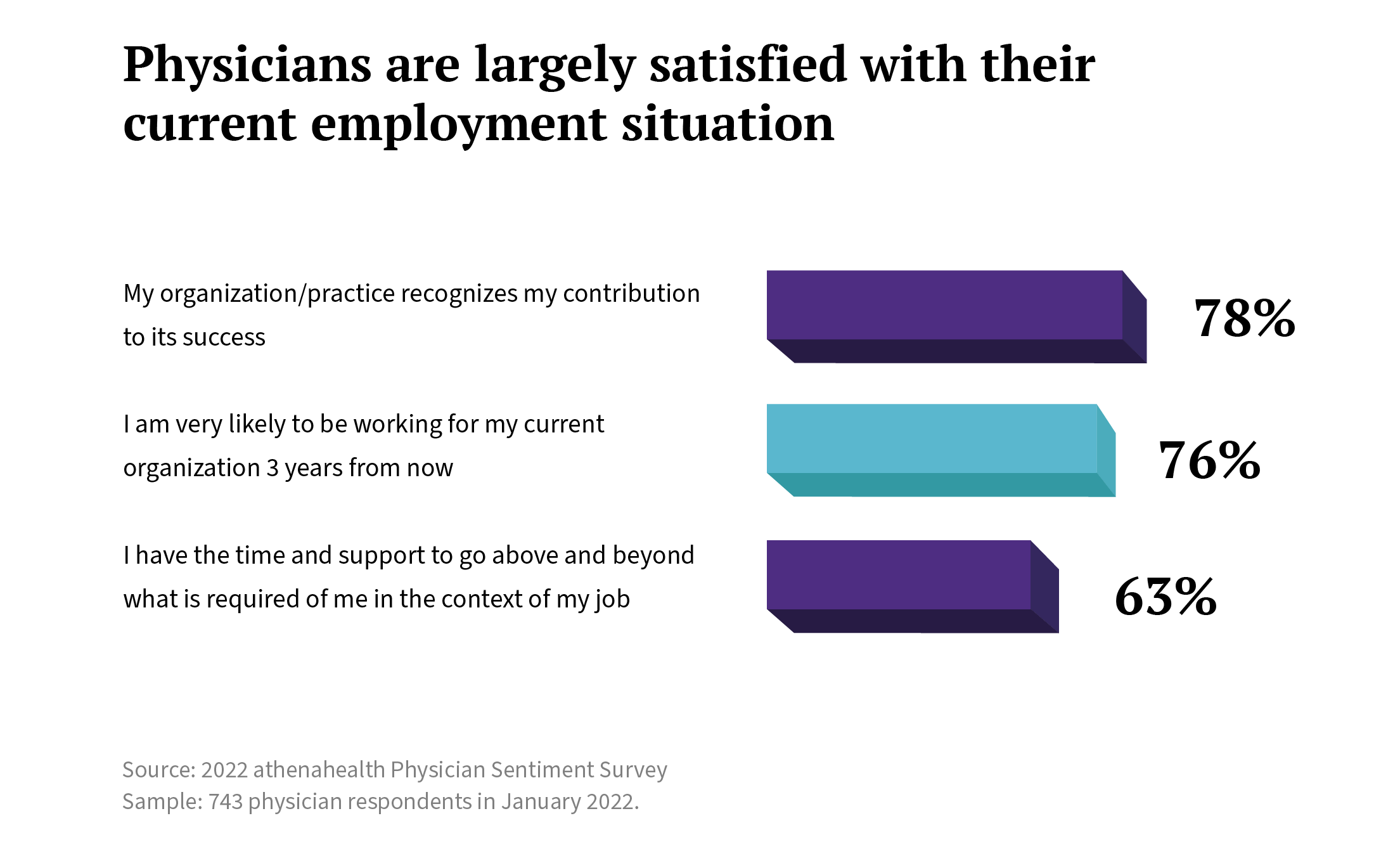 Importantly, the survey finds that physicians who say they work at organizations that have taken steps to reduce burnout have a much more positive outlook than those at practices that have not. These respondents, for example, are more likely to say that communication within their organization is open and candid (83% vs. 59%), that clinical team members can operate at the top of their licenses (82% vs. 68%), and that they have the time and support they needed “to go above and beyond” what is required of them in the context of their job (69% vs. 56%).

Another bright spot identified in the survey had to do with the rise of technologies designed to facilitate patient care outside of the clinic. Many respondents said they are hopeful that these solutions will continue to play a role at their practices in the future. In particular, participants noted that their organizations are actively seeking ways to supplement in-person visits with an “omnichannel” approach that also incorporates virtual care, at-home care, and digital-communication channels like phone and internet. 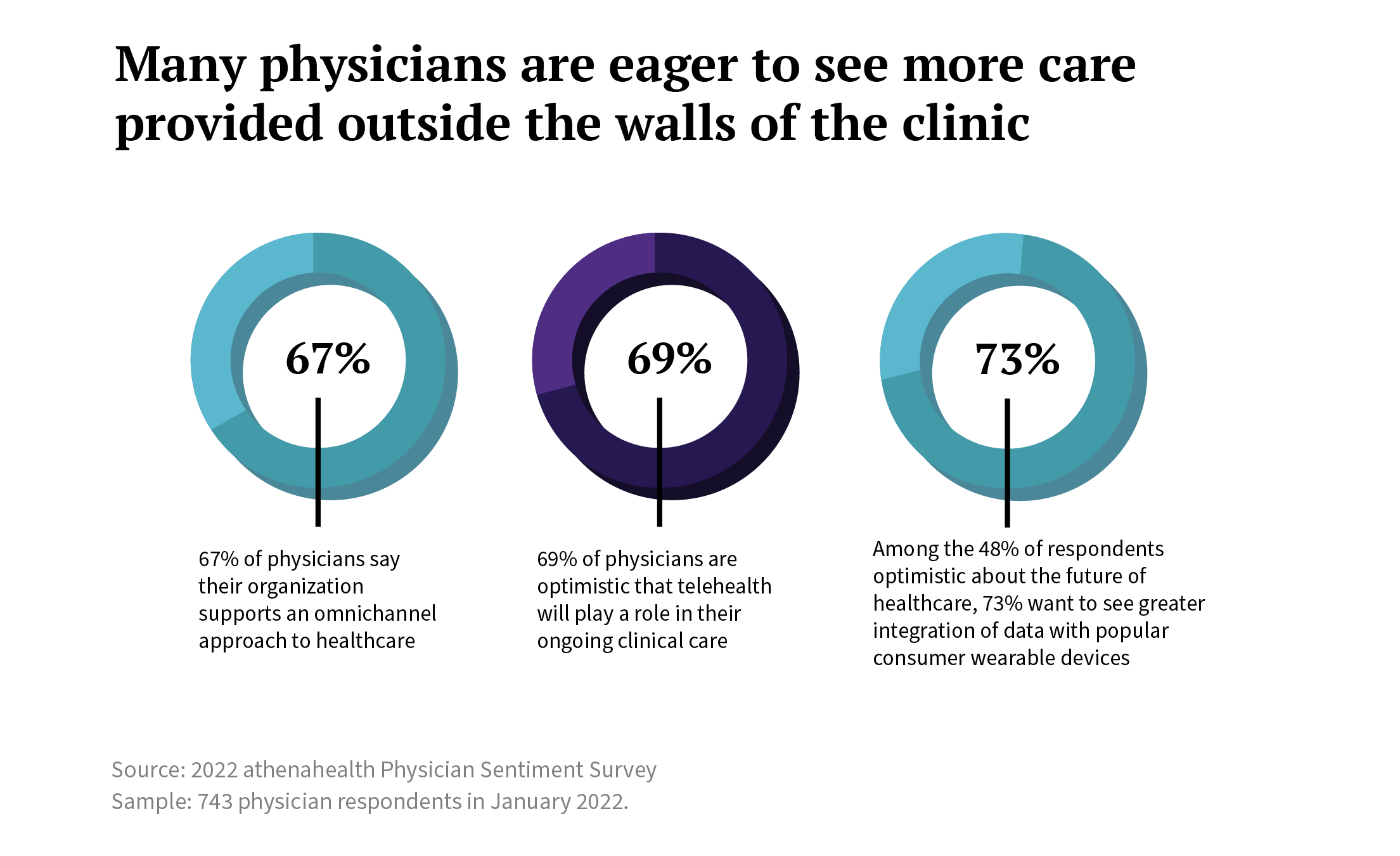 The survey reveals that most physicians believe the technologies they use and the data they can access improve their interactions with their patients and enhance the quality of care they provide. But the majority also say there’s room for improvement in this area: that given the quantity of information they have to sift through, just having access isn’t enough. What they need, physicians said, are tools that would give them the right information at the right time, and in a format that’s easy to understand. 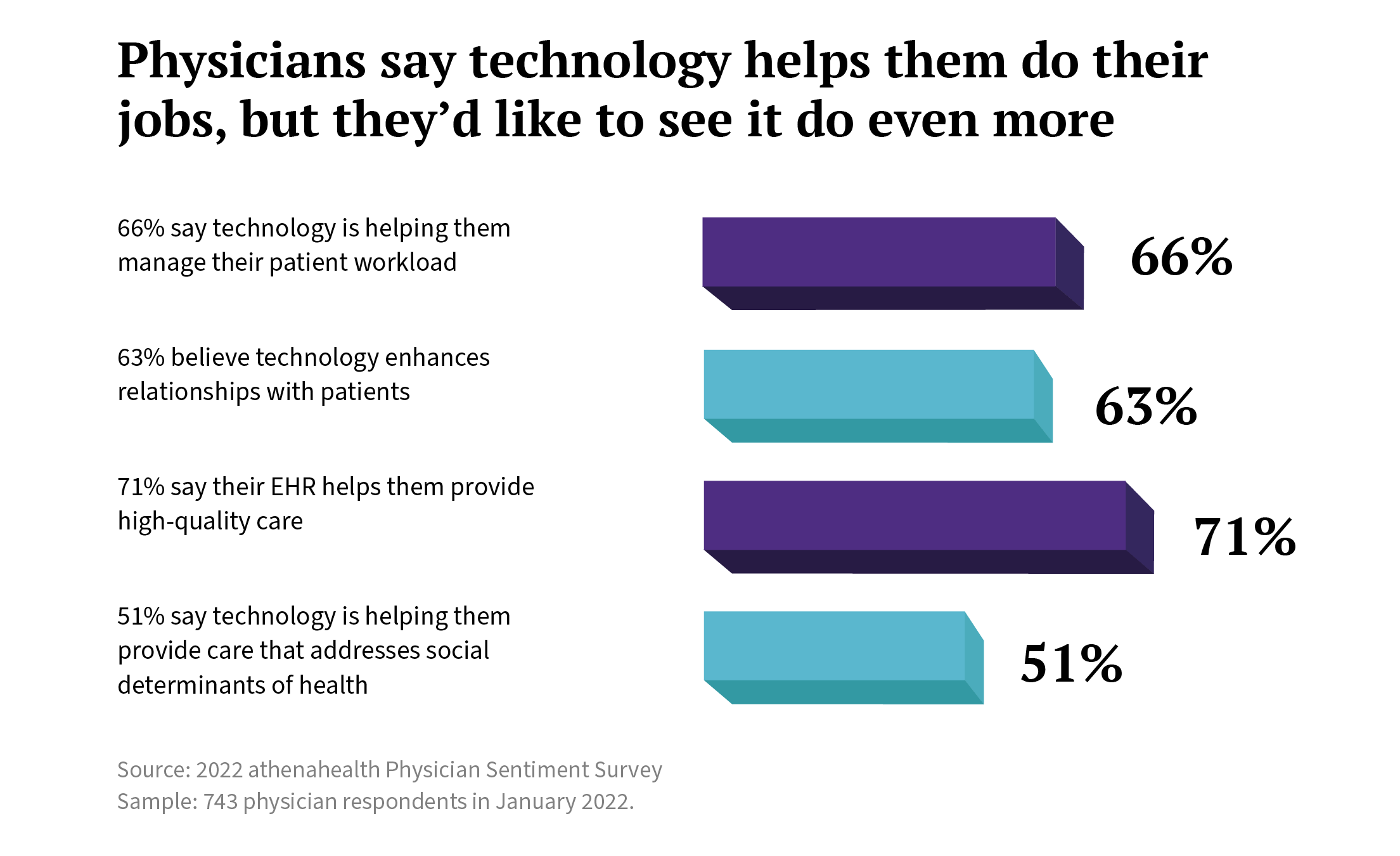 Respondents also noted deficits in their ability to leverage tools that address social determinants of health (SDOH). In the post-survey interviews, for example, physicians talked about the need for technologies like that deployed by Borinquen Health Care Center, Inc., a 12-clinic practice in Miami. At the height of the pandemic, to reduce the likelihood that their low-risk patients would become high risk by delaying or cancelling treatment, the federally qualified healthcare center relied on tools integrated with its EHR to identify care gaps and automate patient outreach. As the organization’s chief quality officer Diego I. Shmuels, MD, explained to athenahealth, “as more data is coming in and more data is transferred, it helps us do better.”

A majority of physicians—and younger doctors, in particular—are optimistic that at some point in their career, healthcare better connectivity will become a reality.

Two-thirds of all survey respondents (and 7 in 10 of those ages 50 or younger) said they believe a “more wholly connected healthcare system” will be achieved before they retire. And while a similar percentage said they currently found it easy to send and receive patient data to or from another clinician within their EHR network, fewer than 1 in 4 believe this was true when it came to connecting with clinicians on different EHRs. 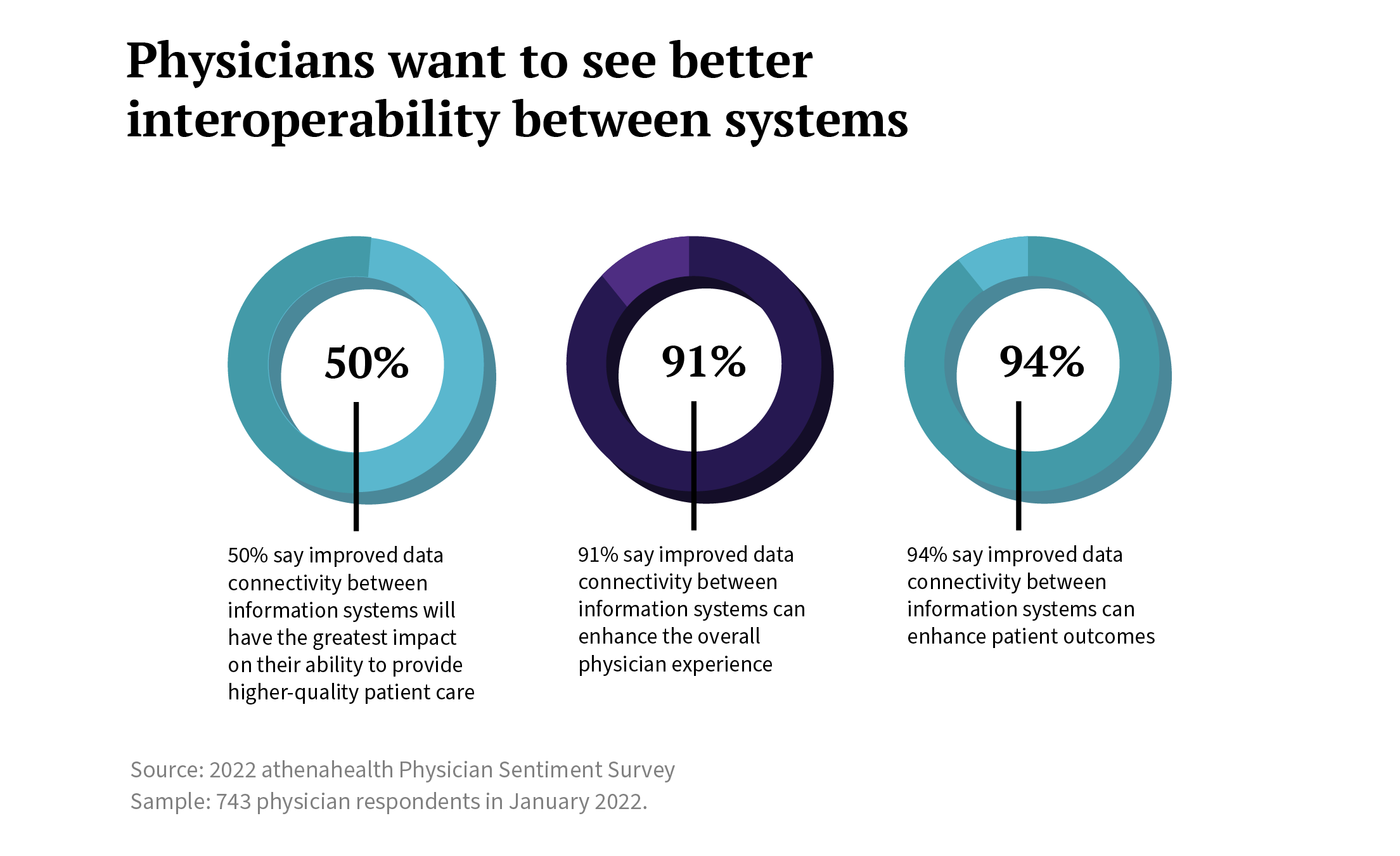 As a number of physicians noted in their post-survey interviews, ubiquitous interoperability in healthcare won’t be an easy win, but that doesn’t mean it isn’t worth striving for. Better IT connections, they said, will ultimately lead to better patient care; would improve the patient experience; and be good for the healthcare industry as a whole.

There is recent progress on that front with the enactment of the 21st Century Cures Act Final Rule. Greater interoperability required by what’s colloquially called the “Information Blocking Rule” means that if a healthcare provider requests data from another healthcare entity, the request has to be responded to and the information has to be shared. Patients can more easily obtain their electronic health records. The government’s goal in enacting these regulations is to provide access, choice, and visibility, and IT has had to follow suit in developing the infrastructure around a plan originally enacted during the Obama administration. Progress, although slow, has been sure.