Recently, a team of researchers led by Dr. Ishani Ganguli from Brigham and Women’s Hospital and Harvard University, and Dr. Hannah Neprash from the University of Minnesota, used de-identified electronic health record (EHR) data from athenahealth to analyze gender differences in primary care visit revenue and time. The results are nuanced, but clearly show that while it is true that female primary care physicians (PCPs) bring in less revenue and see fewer patients on average, they are, in fact, conducting longer patient visits and spending more time with patients overall.

Unlike previous studies of the physician gender pay gap that relied on self-reported survey responses, this study used timestamp data within the athenahealth EHR to provide a more objective measure of physician time with patients.

However, female PCPs also spent 2.6 percent more time with patients over the course of the year, which is particularly impressive given the lower number of total appointments. And they documented 5.9 percent more diagnoses and placed 19.2 percent more lab orders for patients. 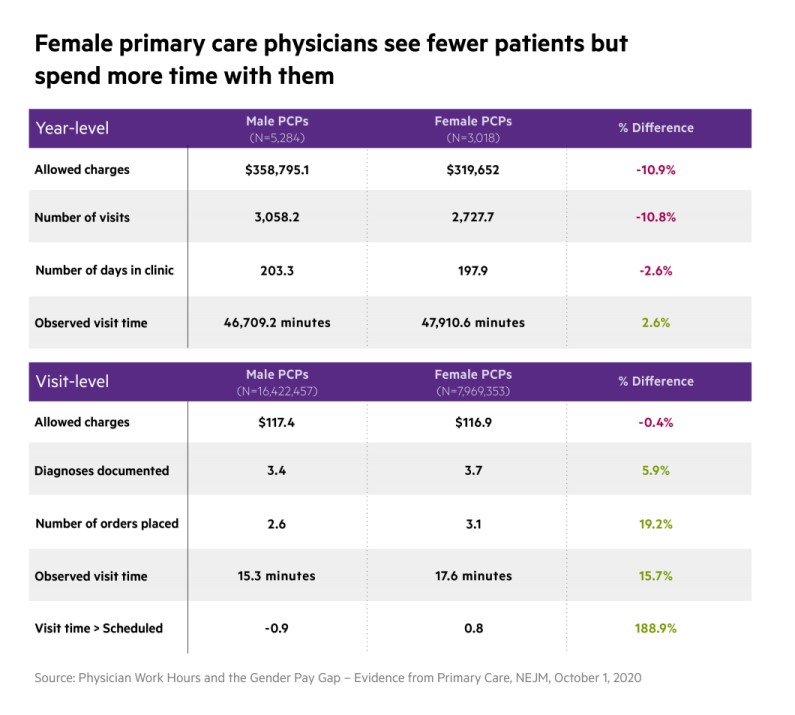 Many of these differences may ultimately be related to practice style.

Female PCPs scheduled 14 percent more visits of 20 minutes or more when compared to male PCPs. They were also more likely to go over the scheduled appointment length. The result is that female PCPs on average spent 15.7 percent more time with patients than male PCPs.

Again, this is most likely related to practice style, with female PCPs conducting longer visits. They may offer more counseling, or take more thorough histories, according to Ganguli. “They also tend to use more shared decision making,” continues Ganguli.

There is some evidence that longer visits are associated with better care outcomes which may, in turn, support better population health. Yet volume-based physician payment models value visit volume over quality, which in turn disadvantages female physicians.

One possibility is to switch to time-based billing. However, Ganguli expresses concern that this approach might come with its own issues, encouraging longer visits simply for the sake of revenue, which is unlikely to feel comfortable for most caregivers. Ganguli suggests considering a capitated value-based care model “that pays doctors or health systems per member per month. I think that probably favors better choices by physicians and may level the playing field for men and women.”

It is likely that female PCPs are already taking this kind of approach, spending time with patients based on their risk level and need. Female PCPs spend even more time with patients who have two or more chronic conditions relative to male PCPs (19.3 minutes versus 17.6 minutes, on average), a difference of 16.2 percent. Chronic care visits are always longer, but they are even longer when scheduled with female PCPs. This may reflect more counseling around diet, exercise, lifestyle recommendations, and health goals.

Ganguli endorses this tendency. “This is the population that, in many ways, needs the most time. And I think that’s the heart of primary care.”

The gender pay and care gap has important practice-level implications

Why are practices content to have female PCPs bring in less revenue and conduct fewer patient visits than their male providers? According to Ganguli “it may be that some female providers are considered part-time and that’s how they are being paid.”

Or perhaps practices see the value in the wraparound care female PCPs are providing, relying on them for these longer, more involved visits, while counting on male providers to bring in revenue. This approach may offer financial balance to the practice, but disadvantages female providers when it comes to compensation. “Female PCPs are getting the extra time with patients at the expense of visit revenue,” says Ganguli “and male PCPs just aren’t paying that price.” But, Ganguli also notes “the pressure is on male physicians to earn.” The gender gap can cut both ways.

Female physicians also tend to bill at lower reimbursement rates than male providers, missing the opportunity to bill more based on time. This may reflect societal norms around how women value their own work and contributions. Or, says Ganguli “women may prioritize revenue less, and not look for those opportunities to bill at a higher level, or, if there’s any question, women are less likely to take that risk.”

In any case, this represents a financial opportunity for practices to train all providers, but especially female providers, to look for the chance to legitimately bill at higher rates when the visit warrants it.

The gender pay gap in primary care is a complex issue worthy of further analysis. But it is clear that the difference is not as simple as female physicians working less or taking more time off for caregiving responsibilities. There is a real difference in practice style that appears to benefit patients while financially penalizing the female providers themselves.