The face of medicine is changing – and so is its gender.

Statistics show women now constitute a majority in the ranks of younger doctors, a transition that is likely to put pressure on healthcare institutions to change their practices around scheduling, supporting and promoting female physicians. 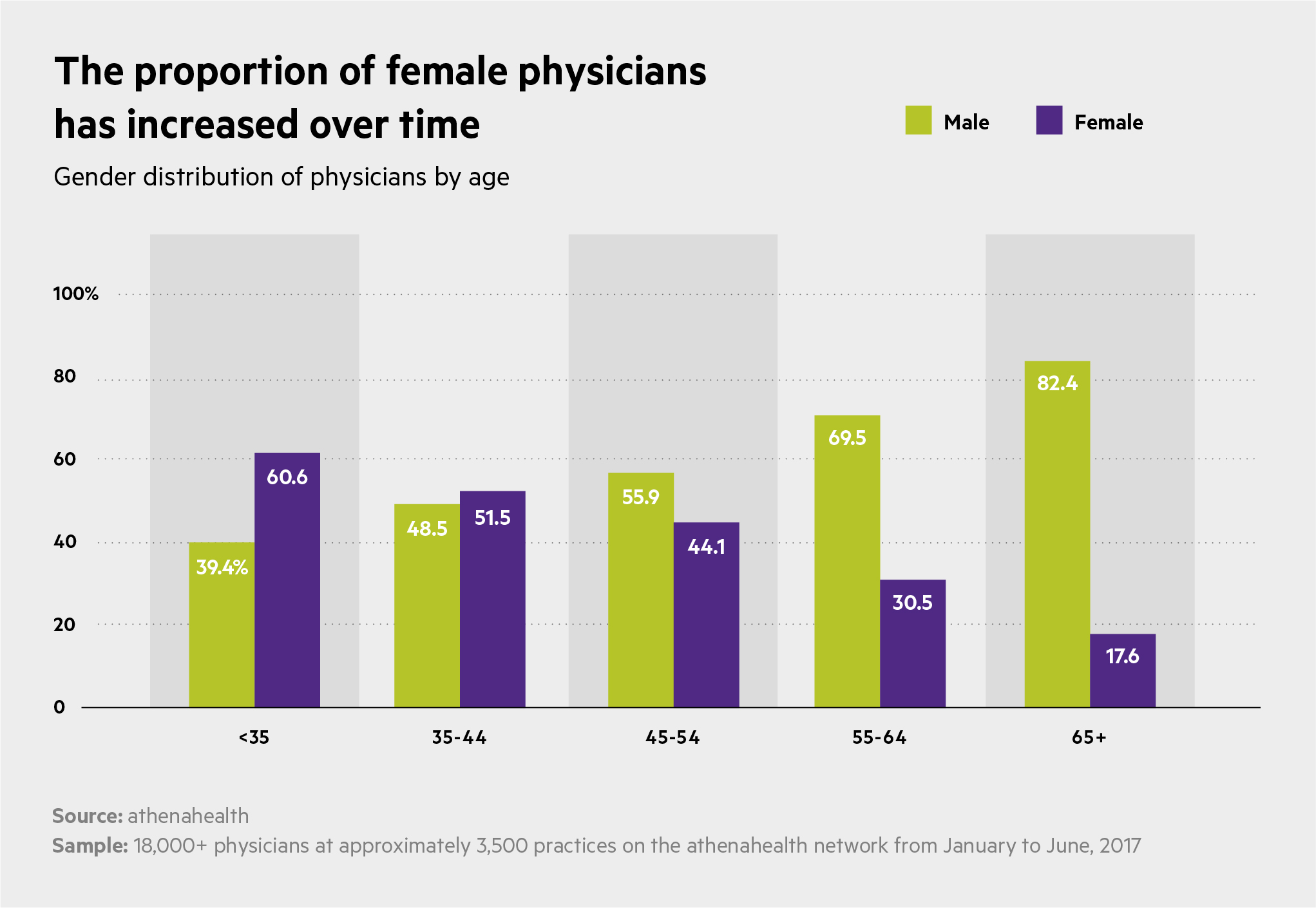 From January to June 2017, athenahealth surveyed 18,000 physicians at 3,500 practices on its network, and determined that more than 60 percent of physicians under the age of 35 are female, while just under 40 percent are male. In the next-highest age bracket (35 to 44 years of age), women are the dominant gender as well – just slightly – coming in at 51.5 percent. As each age bracket gets older, the percentage of female physicians drops, with 82.4 percent of physicians over the age of 65 being male.

The trend shows no signs of slowing down: In 2017, the number of women enrolling in U.S. medical schools exceeded the number of men for the first time, according to data from the Association of American Medical Colleges.

As women become a major force within the medical community, healthcare executives and administrators, many of whom are men, are tasked with creating an environment that prioritizes retaining and supporting female physicians in order to maintain a robust workforce.

Unfortunately, there is often a disconnect between executives and practicing physicians. "Doctors need to feel that their system understands their needs. They want to be included in decision-making," says Danielle Ofri, M.D., Ph.D., associate professor of medicine at New York University and author of "What Patients Say, What Doctors Hear." "The worst feeling for a doctor is when a mandate is handed down from on high from an executive who has clearly never set foot in an exam room."

Scheduling is one area where administrators can make a big impact. "Flexibility in scheduling is critically important," says Ofri. "If you allow your medical staff to work a schedule that doesn't force them to sacrifice family or clinical time, they will be much more productive. Luckily for the system, motivation is rarely a problem – most doctors want to do excellent clinical work and just need their employers to make that possible."

Anna Goldenheim, M.D., a 33-year-old pediatric resident at a Boston hospital and a mother of two, says her work life will always be dependent upon her children's schedules. "I think that as a woman, my job priorities are going to be really fluid for as long as my kids are home, and will change again as my kids go to school," says Goldenheim. "I'm hoping to tailor my job to those needs."

Scheduling improvements are only one component to developing a culture that's more supportive of female physicians.

In an industry where physicians have to gain the trust of their patients and colleagues in highly stressful, sometimes dangerous situations, bias can come into play – on the part of both patients and peers, says Elisabeth Poorman, M.D., 33, a primary care physician with Cambridge Health Alliance in Massachusetts.

"From medical school awards, to residency, to the rest of our careers, women and minorities are less likely to be recognized for the same accomplishments and more likely to suffer abusive treatment and mistrust from patients," says Poorman. "Traditionally, we have asked individuals to face this reality alone, without institutional support." 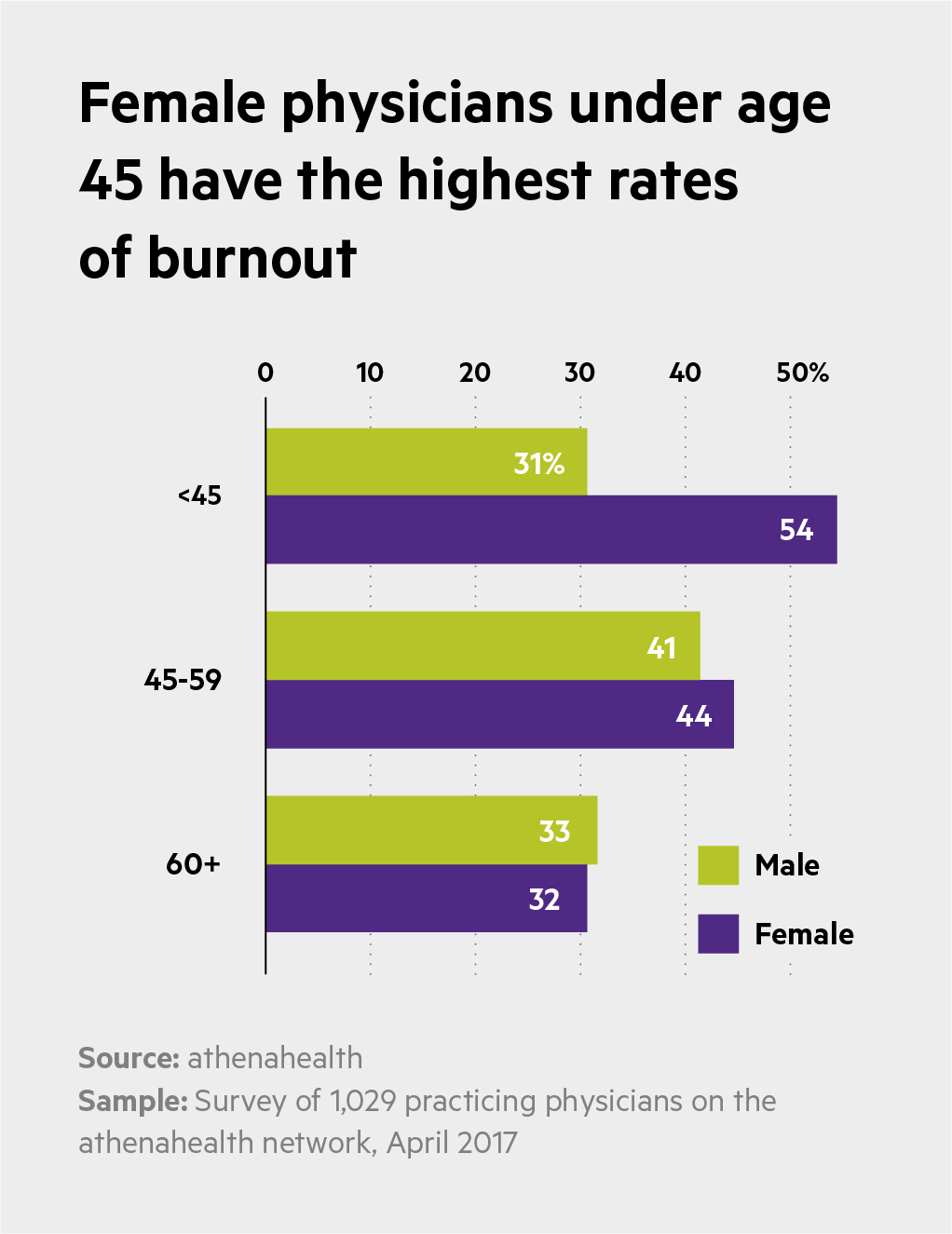 Research from athenahealth indicates stressful work environments may be taking a toll. Specifically, female physicians, particularly younger women, are more likely than their male counterparts to report symptoms of burnout. In a 2017 survey of 1,029 practicing physicians, 54 percent of women under the age of 45 reported symptoms of burnout – emotional exhaustion, depersonalization and sense of low personal accomplishment – compared to 31 percent of males of the same age.

One of the best ways to make the needs of female physicians heard is to place them in executive roles. "Female physicians are still underrepresented and underutilized in positions of power, especially at the most senior levels," says Deborah Shlian, M.D., a medical management consultant in Florida. "We need to eliminate those double standards that penalize women for traits and behaviors that are rewarded in men, like assertiveness, daring, risk-taking, and bravery. Yes, we need to 'lean in,' but we also need to push back."

The changing face of healthcare

Those double standards are visible to many female physicians. "We have robust data that demonstrates that women are rated more poorly in medical school and residency, and that gaps in their evaluations actually grow through their training," says Poorman, who cites a 2010 study that found men are more likely to be seen as "quick learners" than comparable women.

"The area where [women] are most likely to fall behind is in personality traits like decisiveness. And even more troubling, the feedback they get is much more likely to be contradictory. In other words, supervisors send the message to women in training that there is no good way to be a woman in medicine," Poorman says.

Similarly, it would be irresponsible to not recognize that not only gender, but race, often determines the way female physicians are treated, Poorman says. "I think of the 'changing face of medicine' in terms of more women and more people of color," says Poorman. "Anybody who doubts the existence of racism should follow a black woman physician around all day."

While many older patients are used to the stereotype of a white man as their physician, the dropping number of male physicians means they'll have to learn to adapt to medicine's changing face. This means accepting that their physician may in fact be younger, a woman, a person of color, or all three.

While that may represent a significant shift in mindset for some, the good news is that quality of care generally trumps other considerations in determining how patients feel about their physician, says Ofri. "If you ask patients, they'll say they just want a doctor who is competent, caring, and dedicated," she says. "While many may start with a stereotypical image of the older, white, male doctor, as soon as they spend time with a doctor who is committed and enthusiastic, the old stereotype usually just fades away."

Megan Johnson is a writer based in Boston. 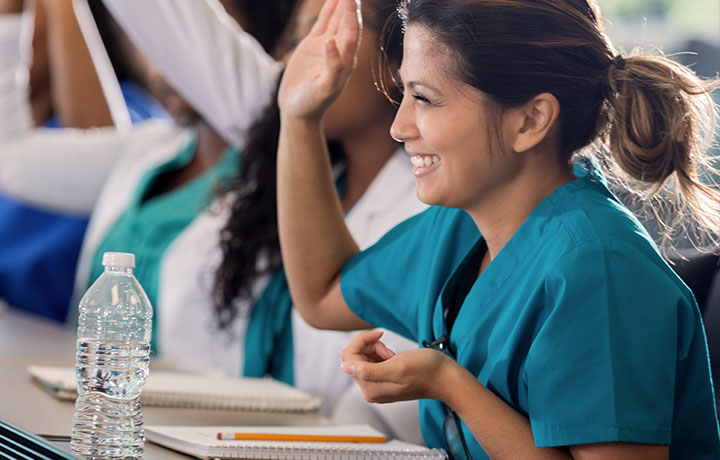 Burnout specialist Diane Shannon, M.D., on how to nurture the new breed of physicians 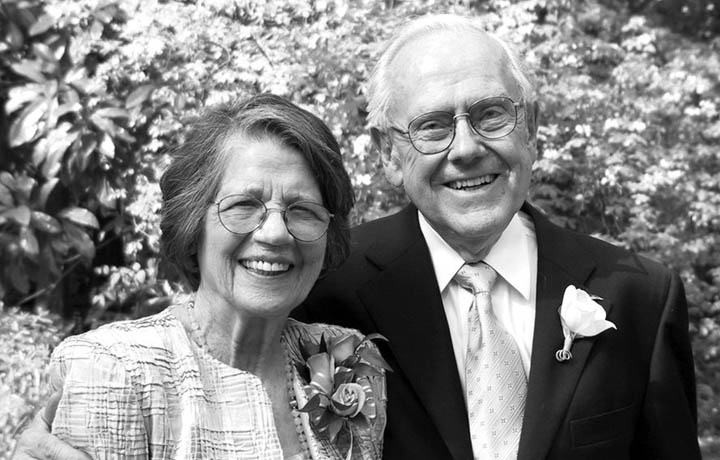 What physicians want: the latitude to care for patients 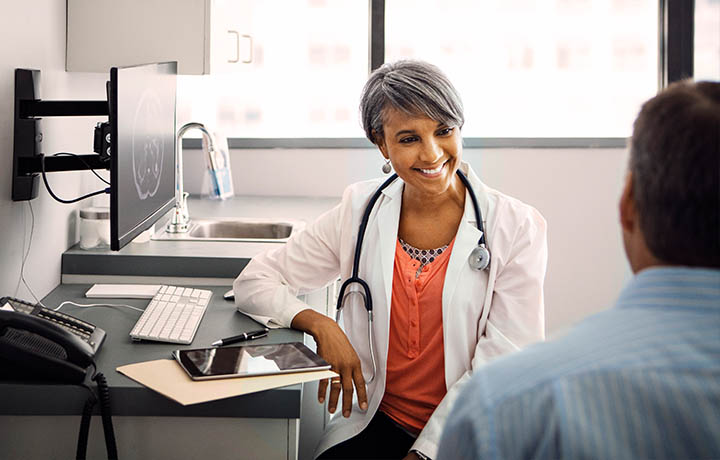 4 tips: How practices can make medicine work for female PCPs