Mental health gets boost from telehealth

Like countless other medical practices, ESD Pediatric Group adopted telehealth as a way to stay open while protecting patients and staff during the COVID-19 pandemic. The assumption at the time was that the move would be temporary — that things would soon return to the way they always were.

Fast forward to late 2022: the pandemic has certainly receded, but at ESD, according to practice president Jeff Drasnin M.D., telehealth remains in high demand. This is especially true among families with children in need of mental health support, he says. “They like it, they ask for it. They want telehealth because it gives them better access.”

Drasnin is far from the only physician to report that telehealth has become a new and important avenue for patients to seek mental health care. For many patients, clinicians note, telehealth is a more convenient way to receive care for conditions that aren’t physical in nature. Some may see the technology as less intimidating than meeting with doctors face to face, while others have turned to telehealth because it’s their only option — without it, they can’t make it to their appointments.

As many studies have shown, everything from public stigma toward mental illness to job and family obligations to a lack of transportation can stand in the way of mental health care for a significant portion of the population. The National Alliance on Mental Illness reports that one in five American adults and one in six children are affected by mental illness, and yet fewer than half receive treatment for their conditions.

When COVID arrived in early 2020 and providers made the shift to telehealth because they had to, practices like ESD Pediatric Group didn’t know how their patients would respond. Many accurately predicted that the lockdowns and social isolation would drive increased demand for mental health services. But whether telehealth would prove to be a solution for getting these patients “in the door”? For that, they would have to wait and see.

Now, nearly three years after the pandemic began, a new study of telehealth usage nationwide may shed light on the answer. An analysis of trends in the athenaOne network shows that telehealth is filling a critical care gap for patients with mental illness.

Athenahealth researchers looked at appointment and diagnosis data between January 2019 and April 2022. They also considered the results of a follow-up survey — conducted online in June and July 2022 — of 2,000 adults across the United States both within and outside of the athenaOne network.

Overall, they found, among athenaOne patients, telehealth appointments as a percentage of all visits climbed from close to zero at the start of the study window to nearly nine percent three years later. Reflecting the prevalence of stay-at-home orders intended to limit the spread of the virus, telehealth usage peaked in 2020, when it accounted for almost 13 percent of all practice visits.

The survey, for its part, found that 66 percent of all respondents reported they attended at least one telehealth appointment since the beginning of 2020. The vast majority of those polled indicated their providers had begun offering telehealth at the start of the pandemic, and about half said that telehealth was still being offered as of mid-2022. 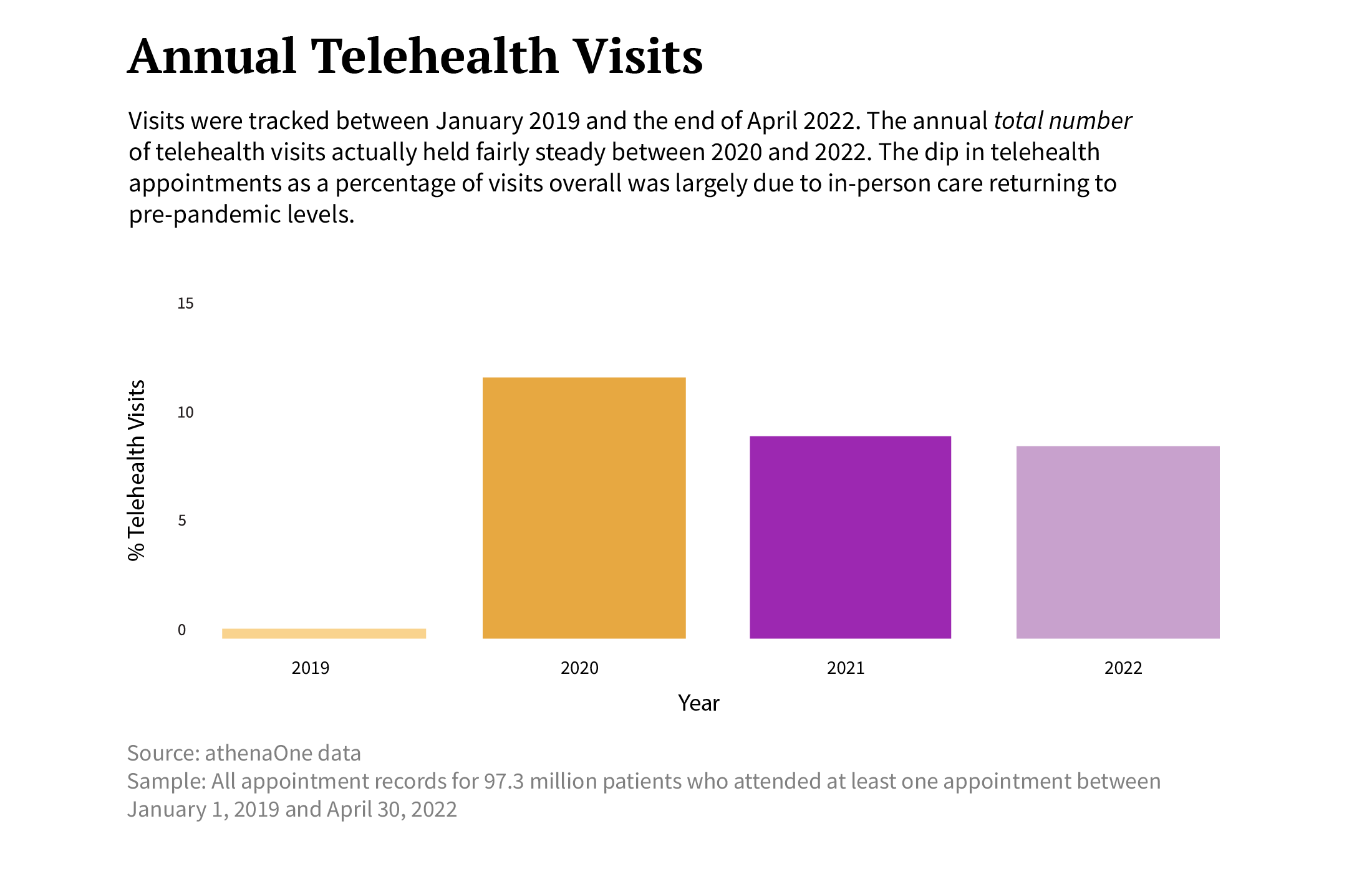 The athenaOne analysis found that patients who attended a telehealth appointment between 2020 and 2022 were generally more likely to receive a new diagnosis than those who had in-person appointments. This held true for both physical health diagnoses of conditions like diabetes and hypertension, and for mental health diagnoses of anxiety and depression. 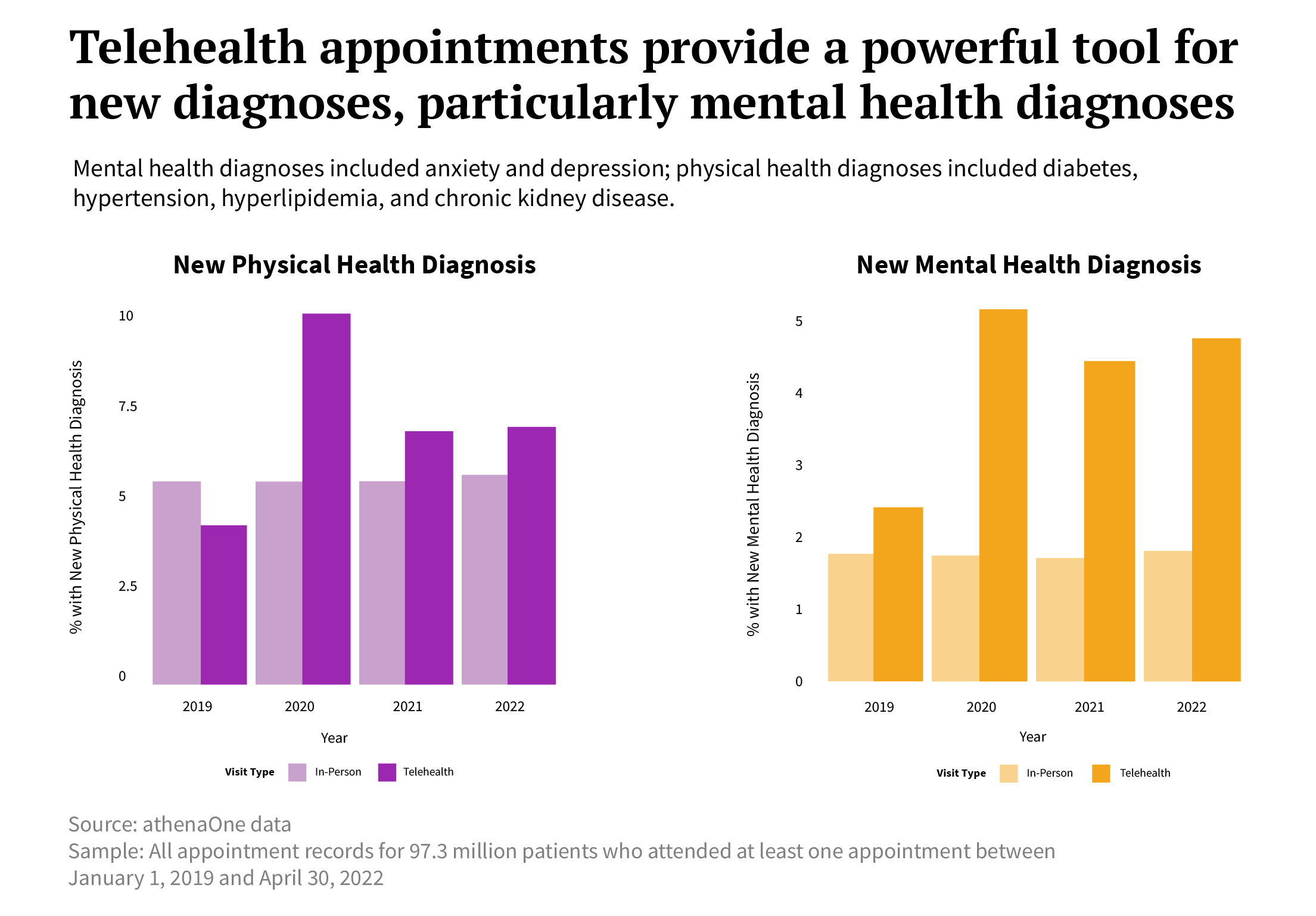 Digging deeper into the data, the degree to which new physical conditions were diagnosed more often via telehealth than in-person decreased over time, while the telehealth-heavy diagnoses trends for mental health disorders remained consistent throughout the study window. Researchers also found that patients given mental health diagnoses during their initial telehealth appointments were more likely to schedule follow-up appointments via telehealth than patients diagnosed with physical health problems.

“We can’t tell for sure why this is the case,” says athenahealth quantitative research manager Allison Roberts, PhD “but it could be that people with physical health problems preferred to be seen in-person once they had the choice, while more patients with mental health concerns decided they’d rather use telehealth.” Roberts adds that the findings could also signal that telehealth is being used as a triage tool for clinicians to direct patients to the right mode of care for their specific situation. “And it could be that many patients find it difficult to identify an appropriate mental health care provider in their local area and use telehealth as a way to obtain mental healthcare that would otherwise be inaccessible.” 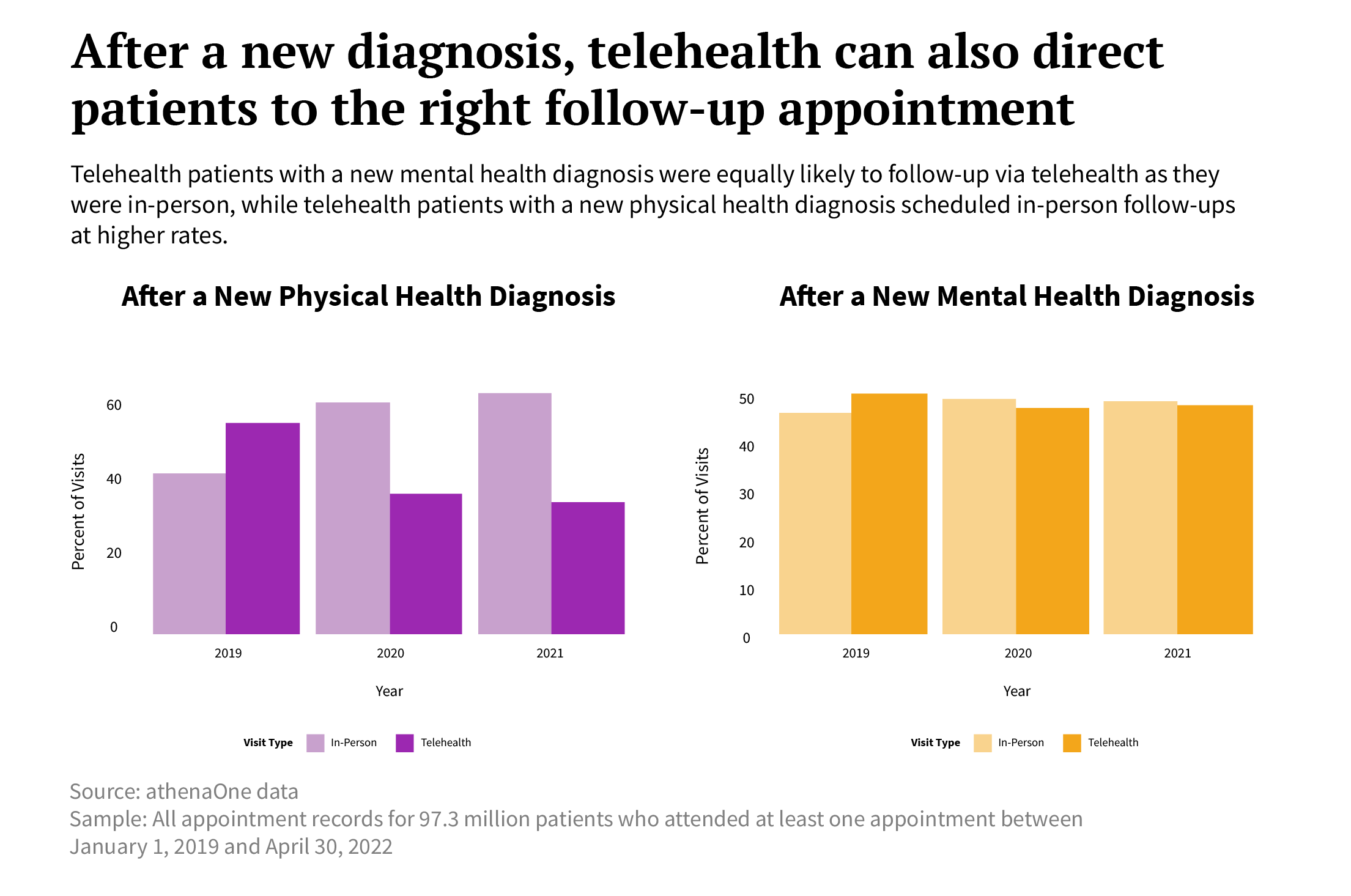 Turning to the survey results, the researchers found that younger and wealthier patients in particular were likely to embrace telehealth for their mental health care needs.

Nearly 45 percent of respondents who said they were members of Gen Z (roughly age 25 and younger) reported scheduling telehealth appointments during the pandemic because of new mental health concerns, while just 20 percent of older Gen X patients—and less than 5 percent of Baby Boomers—indicated they did the same.

Meanwhile, across all age groups, about 30 percent of those making more than $100,000 annually said they booked a telehealth appointment to address a new mental health concern. This dropped to around 20 and 25 percent for those making under $35,000 and $35,000-$100,000 respectively. “It may be that wealthier patients have easier access to the technology necessary for telehealth visits, or that practices are more likely to offer the service,” says Roberts. 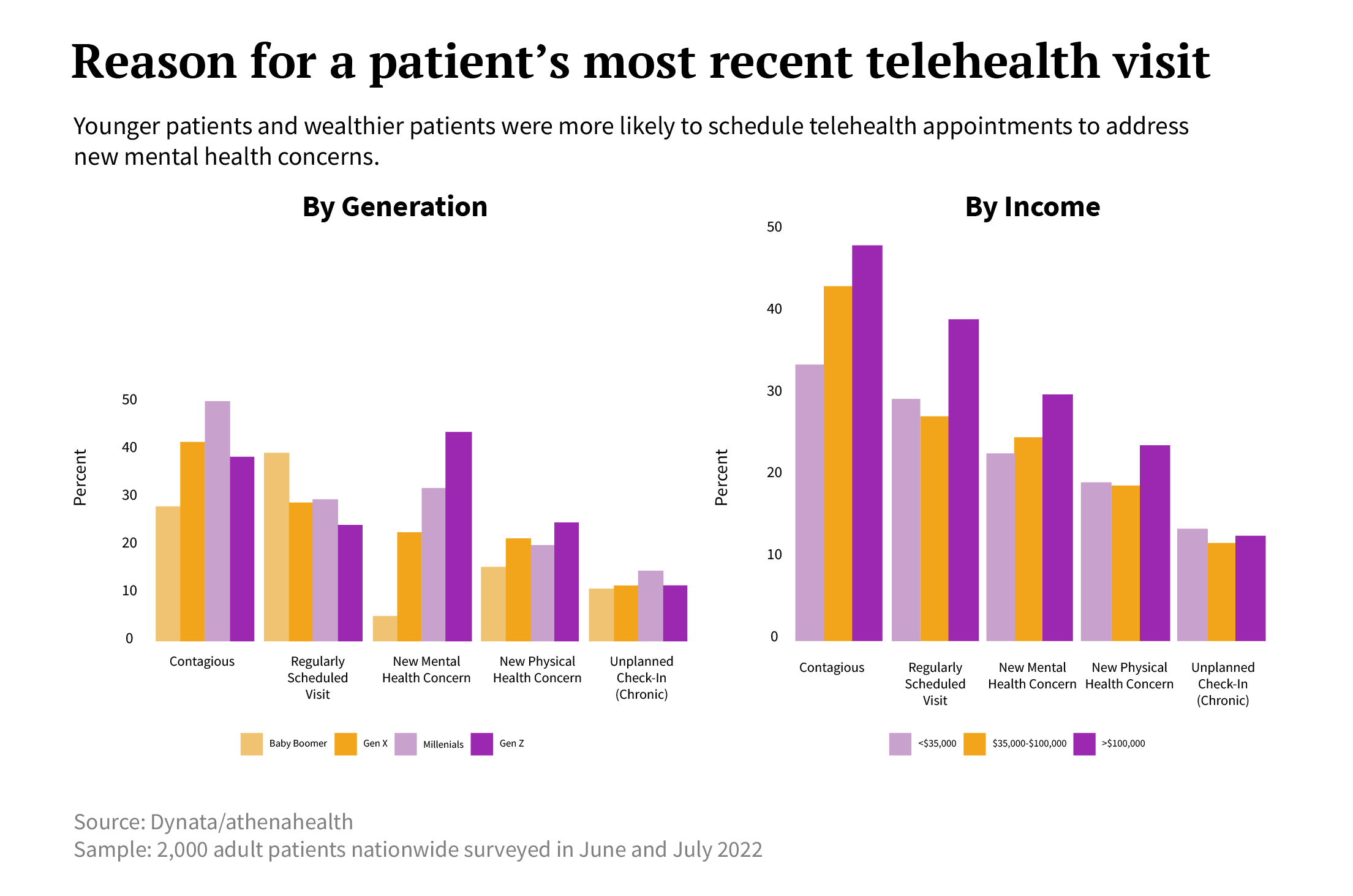 Roberts notes the survey revealed that one in four respondents who scheduled telehealth visits indicated they did so in order to address a new mental health concern. And perhaps most importantly, she says, a similar percentage of respondents overall said they were more likely to seek out mental health support because of the availability of telehealth.

“I think what we’ve learned is that telehealth can be an important tool for increasing access to and willingness to engage in mental health care,” Roberts says. It’s clear that telehealth didn’t just replace in-person visits during the pandemic, she adds. “Instead, it served as a vehicle for diagnosis and treatment for patients who may not have come in for the care that they needed if telehealth hadn’t been offered.”