The Cost of Long Wait Times

“The nurse saw me to take my weight and temperature and blood pressure, but my doctor didn't come in until two hours after the appointment [was scheduled to start]," she says.

Complaints about waiting for hours at primary care clinics and specialists' offices fill internet forums and Yelp reviews. The problem is getting worse: one recent survey found that wait times have increased by a whopping 30 percent in major U.S. cities since 2014.

And those delays can prove costly to healthcare providers. New research from athenahealth, using data from patient surveys issued by Medstatix, ties longer wait times to a lower probability of recommending the practice to others. 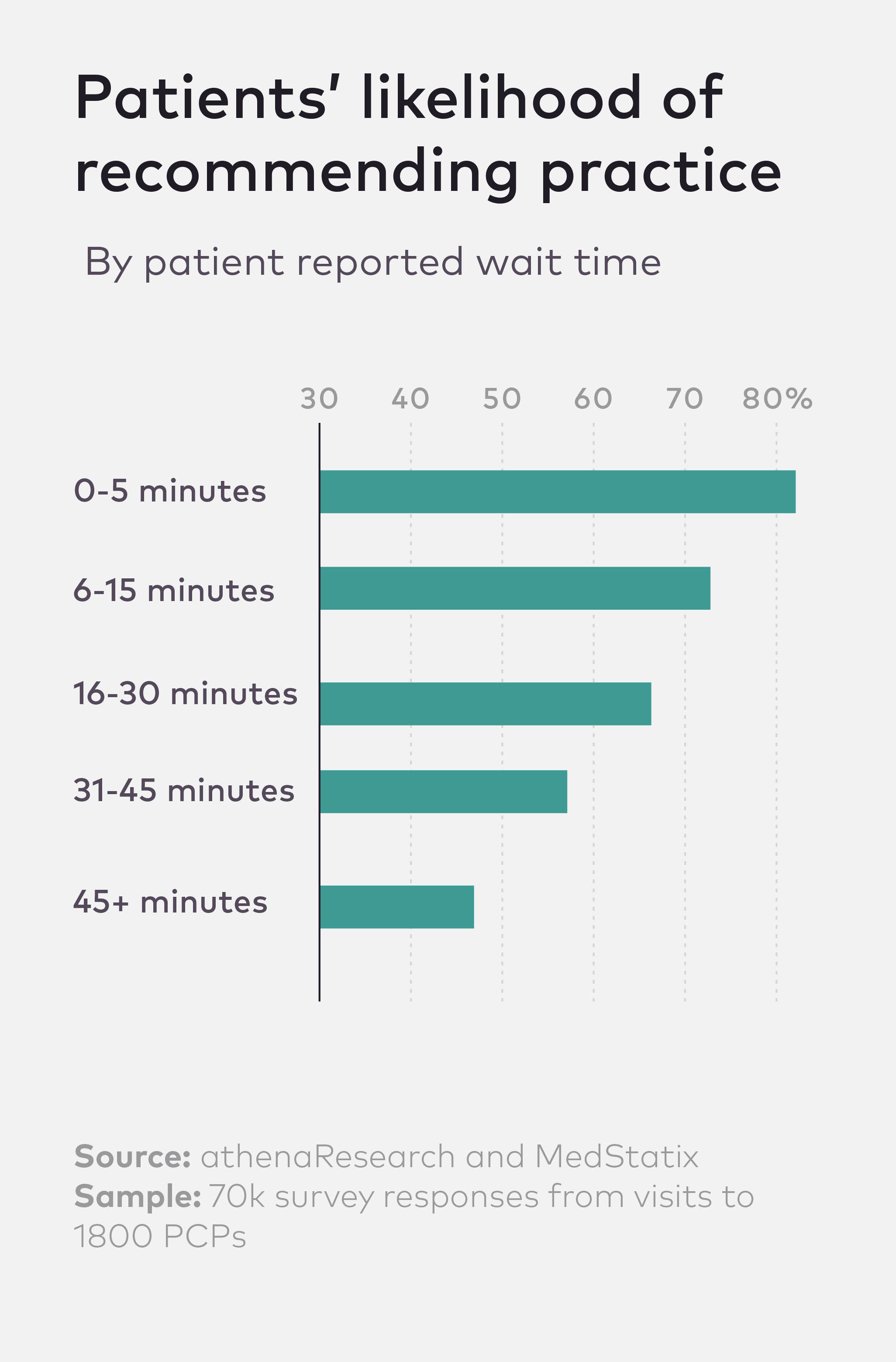 The study correlates satisfaction data, drawn from MedStatix surveys of more than 200,000 patients, with productivity metrics from practices on the athenahealth network. And it suggests one potential factor for growing wait times: the pressure to increase productivity. Researchers found that patients who saw more productive providers tended to wait longer — and felt rushed through the experience.

Those results suggest a costly tradeoff between productivity and patient satisfaction, says Josh Gray, vice president of research at athenahealth.

“Providers can be more productive without sacrificing patient satisfaction," Gray says. “But they should know that any effort to increase productivity at the expense of keeping wait times reasonable may affect the bottom line."

Faith in the physician

Other factors may contribute to those growing wait times, from an aging population to a shortage of physicians to expanded healthcare coverage under the Affordable Care Act.

And some research suggests that most patients are fine with waiting 20 minutes or less to see a doctor. Once waits move past that marker, though, satisfaction rates dip drastically, especially without proper communication or mitigating systems in place.

“There's good evidence that wait times are one of the most important factors on patient satisfaction and loyalty in practice, and therefore convert to revenue," says Melanie Michael, DNP, MS, an assistant professor at the University of South Florida College of Nursing in Tampa, Florida and the lead author of a study that looked at interventions for lowering clinically-based wait times.

Sometimes long waits are unavoidable. Ryan Kelly, a Pittsburgh resident, makes yearly appointments with a highly rated neurosurgeon to be sure that the benign tumor on his pituitary gland isn't affecting his brain. He says he once waited more than 3.5 hours to see his doctor. It turned out that there were only three brain surgeons — including his — within a 200-mile radius who could perform a certain surgery, and someone in a local emergency department required the life-saving procedure.

“You can't be mad about that," Kelly says, noting that the office staff explained the situation and gave him the option to reschedule. He elected to wait since it was so hard to get an appointment, he'd already taken time off work, and he'd grown accustomed to long delays.

“I try to approach all hospital visits assuming the worst and hoping for the best," Kelly says. “I have literally never had an appointment on time when visiting with neurosurgery."

Evidence suggests that, as in Kelly's case, healthcare providers can increase satisfaction scores by improving communication. And a good relationship with a clinician can overcome a negative experience. In fact, the Philadelphian who waited two hours to see her primary care physician says she plans to see the same doctor again.

“Although it is excruciating waiting in a windowless room for so long with little internet service, my mom, myself and my brother all go to this doctor because we love him," she says. “He takes so much time with his patients, hearing what's wrong and diagnosing and just generally checking in. He's great at what he does, which is why we haven't left."

Help from the front desk

Still, many healthcare organizations are taking steps to prevent or mitigate excruciatingly long wait times. Often, that work focuses on factors outside the physician encounter. Even the comfort of the environment, the aesthetics of the room, and distractors such as magazines and television sets can change someone's perception of a long wait, Michael says.

But front office workflows are especially critical, Michael says. She and her team found that front-desk staff was the key factor in lowering wait times, as well as keeping people happy when long waits were unavoidable.

“[At one practice], we found that these people were trying to answer phones, field questions from patients in the waiting room, check patients in, secure insurance info, and many other tasks," Michael says. “So we reengineered the front desk [operations] and reallocated tasks. They became much more production oriented and were better able to get patients into the back end of the clinic, faster."

In cases when long waits cannot be helped, Michael recommends implementing a system of reassurance. She suggests letting patients know where they are the queue, and making delays visible via a timer or clock. Simply confirming to patients that someone knows they're there can make all the difference, she says.

Dyanna Johnson, CEO of Orthopedic Associates of Northern California, agrees that reassurance and communication matter. In her office, patients often experience longer-than-usual wait times due to surprise unknowns like emergency surgeries. Johnson focuses on teaching her clinical team to communicate directly with the front office team.

“Patients waiting in the waiting room [need to know] they haven't been forgotten about," she says. “So they are given the option: Would they like to come back later that day, or the next clinic day? Or would they like to continue to wait?"

Ultimately, Johnson says, transparency has increased patient satisfaction ratings at her clinic. “Patients are just thankful that they know what's going on, and I'd say 90 percent of the time they don't reschedule. They just wait it through."

Moving forward, small fixes like these will be a worthwhile investment, Michael says — especially as the payment landscape changes and patients take a more active role in their care.

“Given current payment incentives around patient satisfaction, it's going to be more important than ever before that we focus on this," Michael says.

MedStatix is a patient experience analytics company based in Pennsylvania. 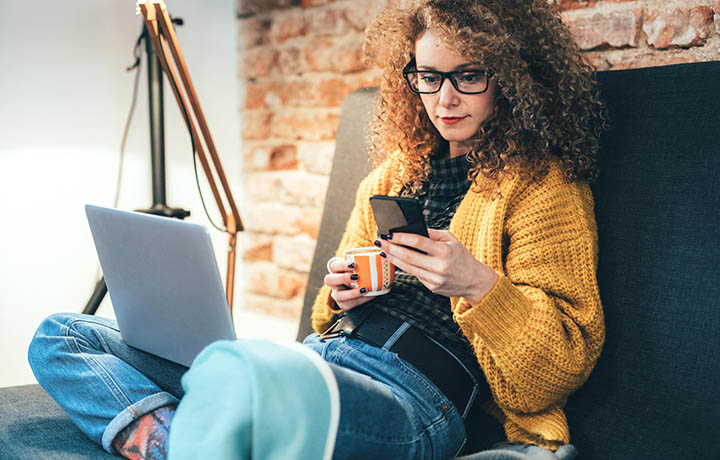 Up for grabs: 26-year-old healthcare consumers

As they roll off their parents’ insurance, millennials show little interest in primary care 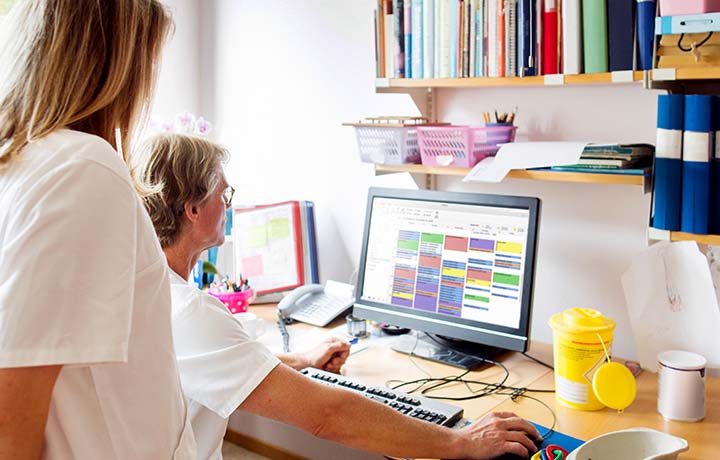