The challenges surrounding clinician documentation time are no new conundrum. Study after study show that “pajama time” spent charting after-hours is one of the biggest factors impacting burnout.

But new research from athenahealth on the time clinicians spend documenting in the EHR finds that the ongoing stressors of the pandemic and a critical staffing shortage make now a more important time than ever to address the related factors that are likely to impact clinicians’ satisfaction and wellbeing.

Conducted in the first half of 2021, the findings from the athenahealth Research and Insights team show that factors including region, gender, organizational structure, and medical specialty are all associated with the amount of time clinicians spend documenting in the EHR. The research includes analysis of de-identified data from across athenahealth’s network of customers as well as conversations with clinicians; results focused on both the quantity and quality of clinicians’ EHR time. This article is based on that research.

athenahealth's research team coined the term time patient ratio (TPR) to examine the total time a clinician spends in the EHR — inclusive of time during and outside the patient encounter — relative to the number of patients seen. They concluded that a healthcare organization’s size and its culture each contribute to TPR. Organizations that require more complex documentation have clinicians who spend more time in the EHR during and outside of patient encounters. Overall, those organizations are likely to be larger, and have more detailed internal policies surrounding charting — along with what is typically a more diverse mix of payer contracts and fee structures – contributing to longer TPRs. (Organizations classified as large in the athenahealth research have 22 or more clinicians; medium practices include seven to 21 clinicians; and small one to six.)

At Access Health Louisiana, which has 32 clinics and school-based health centers, Dr. Diana McDermott knows that her situation, which allows her to focus more closely on fewer patients, is more the exception than the rule.

“I’m seeing, on average, upward of 16 patients per day. No one has complained about our RVUs to me…that is one of the reasons I'll stick with Access Health. Because in almost eight years here, that's not been something that's been pushed,” McDermott said. “The flipside of that is, I have some of the highest quality measures in the organization. That's because I am really thorough.”

At some larger organizations — where clinicians are paid by the number of work RVUs they generate through visits — a focus on volume often makes it difficult to complete all documentation during regular patient hours or sometimes to document as thoroughly. Medicare relative value units (RVUs) are one of the primary methods that determine physician compensation.

“I may need to increase the [volume of] patients I’m seeing so that I bring in enough to pay my staff and myself. It's my practice, so I'm the last one to get paid,” said the New Jersey clinician. “It’s a thin margin. It used to be much easier… If there's not enough money, I make sure the staff is paid and then me. Being your own boss in whatever business, that's always the way it is.” 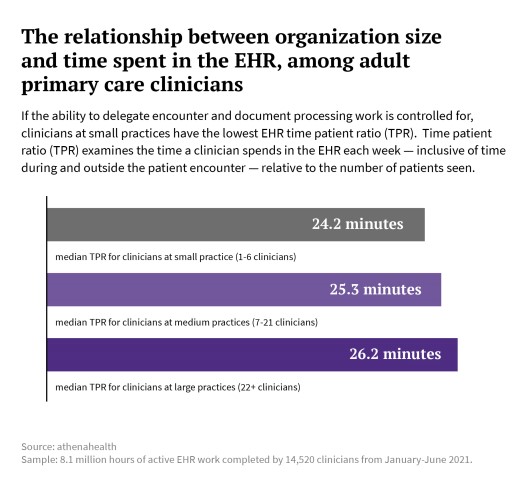 But size isn’t the only component of organizational structure affecting pajama time – nor, perhaps, is it the most impactful. The research concludes that clinicians can mitigate the effects of TPR by delegating tasks. This is often easier in larger systems for several reasons: there are more staff up and down an org chart; dedicated IT teams to custom-build macros and train clinicians to use them; and centralized quality teams to review care gaps and perform outreach that otherwise falls on clinicians’ shoulders.

For most specialties, it is estimated that delegating a minimum of 10 percent of a clinician’s encounter work is associated with a reduction in TPR or percentage EHR time spent outside of patient appointment hours; the same holds true for document processing work.

Clinician specialty also substantially drives the total number of hours a clinician spends in the EHR weekly. Of all specialties included in the athenahealth study, adult-medicine primary care clinicians spend the most time in the EHR per week, followed by neurologists. 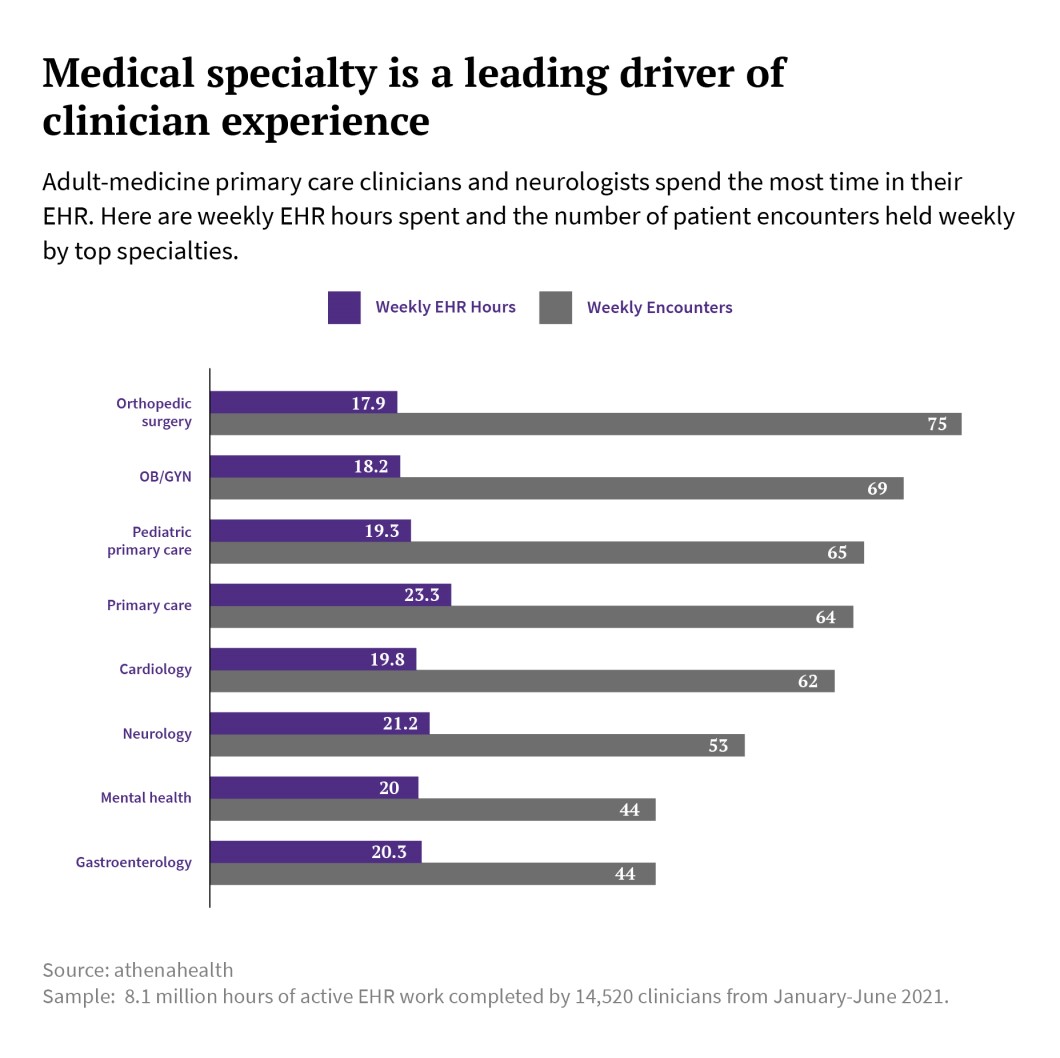 One major difference between specialties is in the number of patient visits they schedule each week. Despite data showing that orthopedic surgeons schedule the most patients weekly, they spend the least amount of time in the EHR as compared to other top specialties. That’s likely because orthopedics enables them to collaborate with other medical professionals to fill their schedules. There are fewer procedural variables than other specialties, and common procedures like hip and knee replacements mean that it’s easier to standardize task delegation. Mental health clinicians see the fewest patients, as they tend to have longer, more conversational encounters that are one-on-one.

While there are myriad factors at play surrounding the major causes of burnout – age and administrative burden among them — quantitative research around time spent in the EHR is among the most common performed. Most studies correlate burnout with specialties that, on average, spend the most amount of time in EHRs. Data from an American Medical Association survey of more than 15,000 physicians using various EHRs across 29 specialties show that orthopedists — whose EHR time is on the lower end, according to athenahealth data — rank among the top five specialties least likely to report burnout. Among the top five most likely to feel stressed? Neurologists and primary care physicians, each of which was measured by athenahealth as the specialties that spend the most amount of time in their EHR.

Determining the reasons why burnout is correlated with specialty may ultimately lead to how to solve – or at least better address – some of healthcare's most pressing challenges. The volume of quality measures that clinicians must meet if their organizations are involved in risk-based contracts can vary widely. Primary care physicians, for instance, typically have more quality measures to account for versus orthopedists. Other factors contributing both to EHR time and burnout include regional market competition and gender, for instance.

The new EHR time research finds that across all specialties, female clinicians generally spend more EHR time outside patient appointment hours and more time documenting per patient than their male counterparts. Top specialties can vary as widely as 62 percent more time spent per patient visit, on average, for female cardiologists as compared to males. 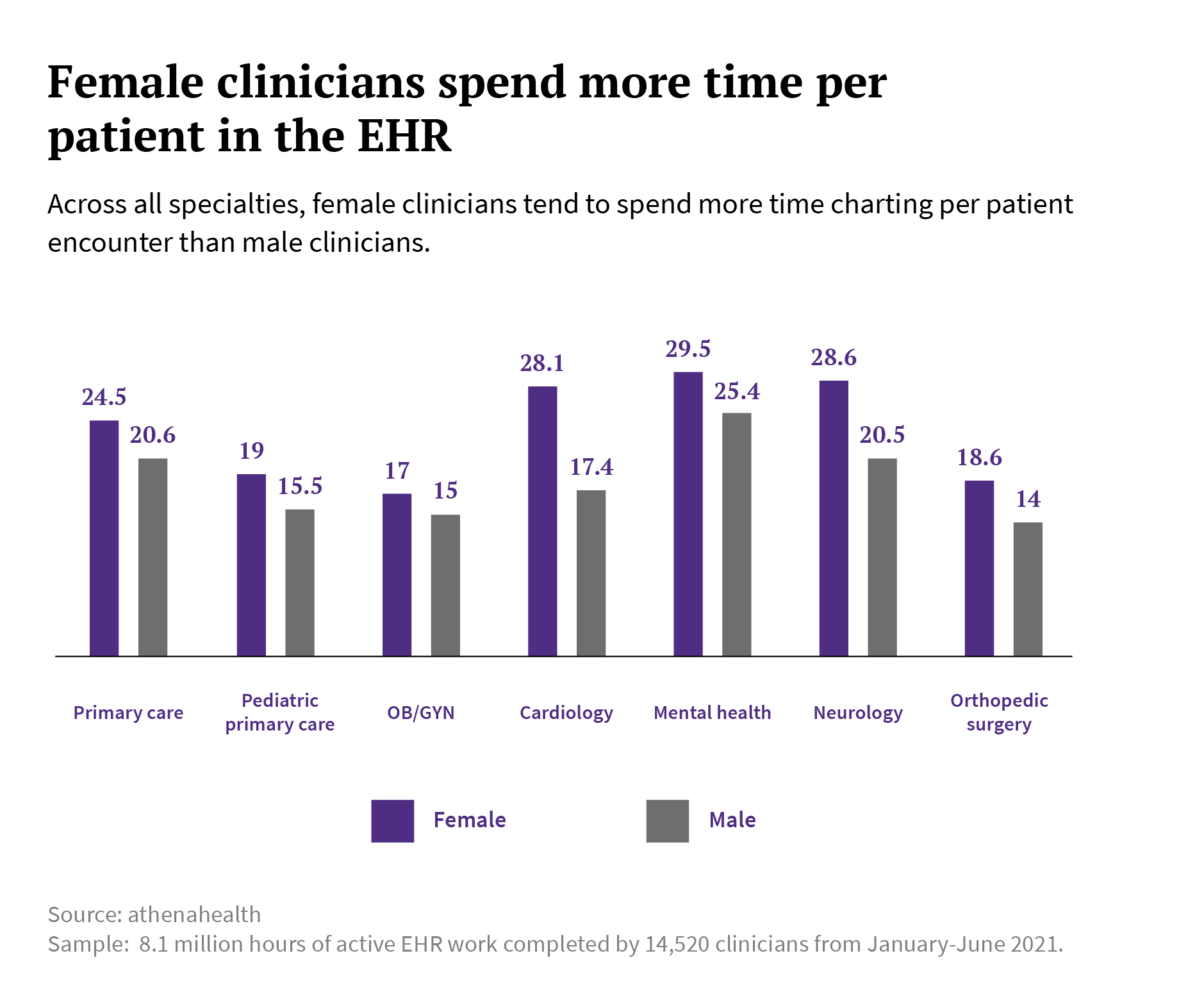 That correlates with athenahealth’s recent Physician Healthcare Workforce Enablement Survey, in which female physicians self-reported spending a higher percentage of their EHR time outside of patient appointment hours. The survey, conducted biannually across users of varying EHRs, is an important burnout barometer.

As the number of females continues to outpace males in U.S. medical schools, the importance of determining the reasons why women will likely spend more pajama time documenting – a leading source of frustration in healthcare — is increasingly important to prevent another “Great Resignation.” But despite spending more time in the EHR per patient visit than male clinicians, female clinicians are generally not spending more total hours in the EHR per week (each gender spends an average of 21.6 hours weekly). A recent study conducted by Dr. Ishani Ganguli published in the New England Journal of Medicine using athenahealth’s EHR data finds that women spend more time with patients during their workdays, which could mean more after-hours documentation — and lower pay. The Brigham & Women’s Hospital physician found that the median male clinician holds 73 encounters weekly and the median female clinician schedules 60 encounters per week. In volume-based payment systems, this means female clinicians are being compensated less, despite working just as long or longer.

Given female clinicians’ likelihood to spend more time documenting, and a more balanced physician gender ratio distribution in New England and the Middle Atlantic regions, it’s little surprise that clinicians in the Northeast rack up the highest number of documentation hours. 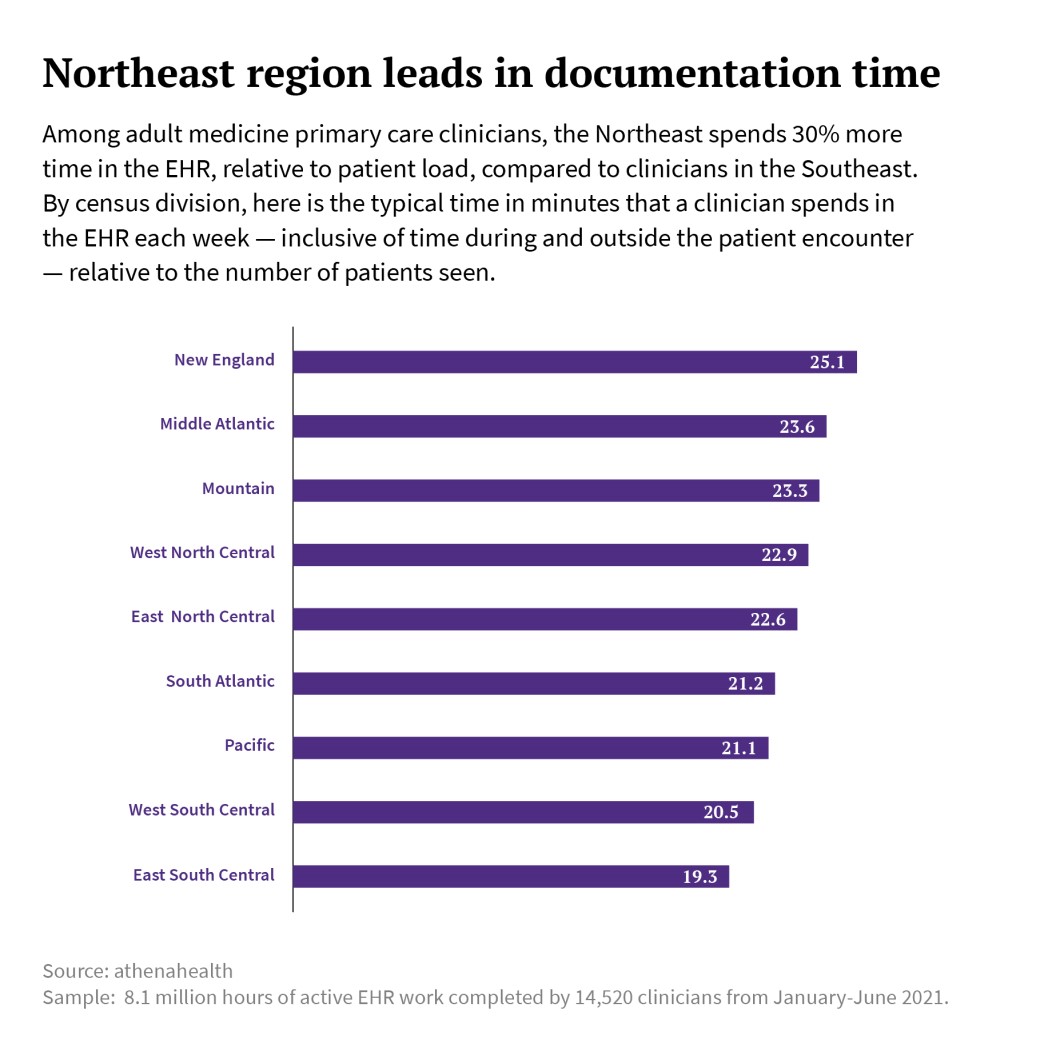 Adult-medicine primary care clinicians in the Northeast have the highest TPR of all census divisions at 25.1 minutes — 30 percent higher than clinicians in the Southeast, the region with the lowest TPR. Higher health literacy, which may also lead to greater patient expectations, may be among the drivers behind clinicians in the Northeast spending more time in the EHR relative to patient load. The Northeast is the most competitive healthcare market in the United States, as well, with the highest number of active physicians per 100,000 population. Moreover, this region generally has more payers and a higher number of clinicians participating in value-based care contracts, which require more complex documentation.

What — and who — can offer help

Complete documentation isn’t an enemy. Many clinicians believe that risk-based models embracing quality over volume may allow them to spend more time with patients and focus on who needs help rather than on a clock. But getting there will require organizational support systems, and standardization of quality targets and terminology. Better interoperability between systems that would reduce duplication of work — and technological tools like natural language processing that could be used during encounters for documentation — hold promise when it comes to offering clinicians the support that they so much need.