Female physicians and patients more likely to use telehealth

Less discussed amid telehealth’s rise is the subject of who actually uses the technology. Many factors affect healthcare utilization overall, from race and ethnicity, to where patients live, to individual socioeconomic status. Practice-related differences can also come into play: A clinician may not take Medicare, for example, or could be too busy to accept new patients.

The question as it relates to telehealth involves how such determinants have affected its adoption. Has the telehealth boom since 2020 benefited some people more than it has others?

Over the last few months, athenahealth researchers have shared their telehealth findings from analyses of appointments booked by patients on the athenaOne network between 2020 and 2022. They’ve also revealed results from an online survey of 2,000 adults, conducted in the summer of 2022, designed to glean insight on telehealth-usage patterns and patient attitudes toward telehealth services. In one report, the researchers highlighted telehealth’s value to patients seeking mental health support, while another described how telehealth has fallen short when it comes to its potential for addressing longstanding healthcare inequities.

Now, the athenahealth team has released its latest work on this topic: a look at the role of gender in telehealth uptake among patients and clinicians alike.

Male patients and clinicians less likely to use telehealth

For both groups, the researchers found, women were much more likely than men to take advantage of telehealth. This held true even after controlling for all available demographic information, including age, race, and clinician specialty and location.

Male patients had 15 percent lower odds of adopting the technology for their appointments. And patients of either gender who saw male clinicians used telehealth less than half as often as those who saw female clinicians.

Across all three years of the study, women made up the majority of patients in two distinct cohorts: those who used telehealth at least once, and those who never used the technology at all. 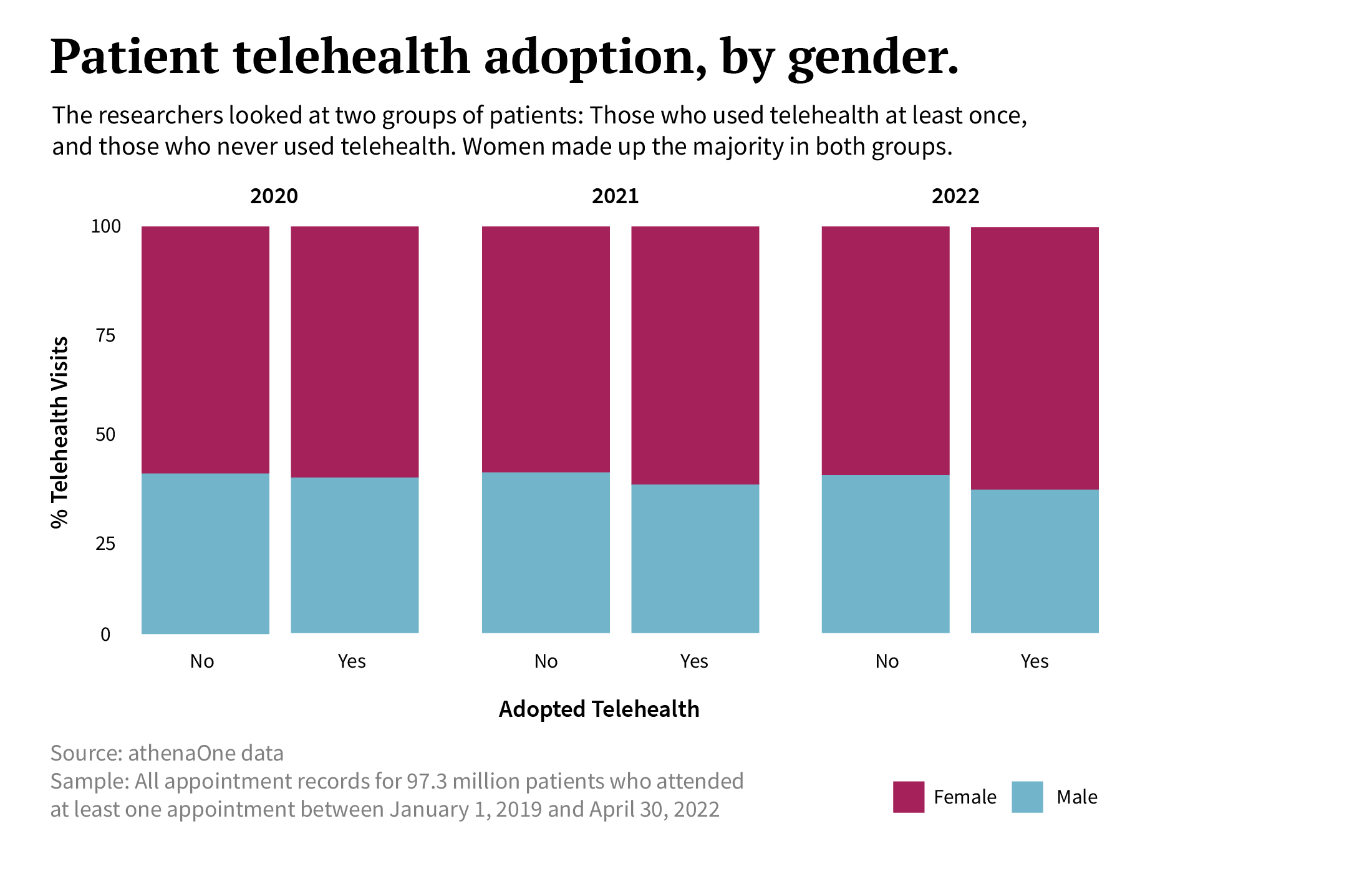 When it came to clinicians, meanwhile, women offered telehealth through their practice more than men throughout the research period. In 2020, 67 percent of female clinicians offered telehealth as a service, while 63 percent of male clinicians did the same. These numbers declined somewhat over the next two years, presumably as some practices tried to return to normal, but the disparity continued and hit its peak in 2022 with an 8-percentage-point difference between women and men providers. 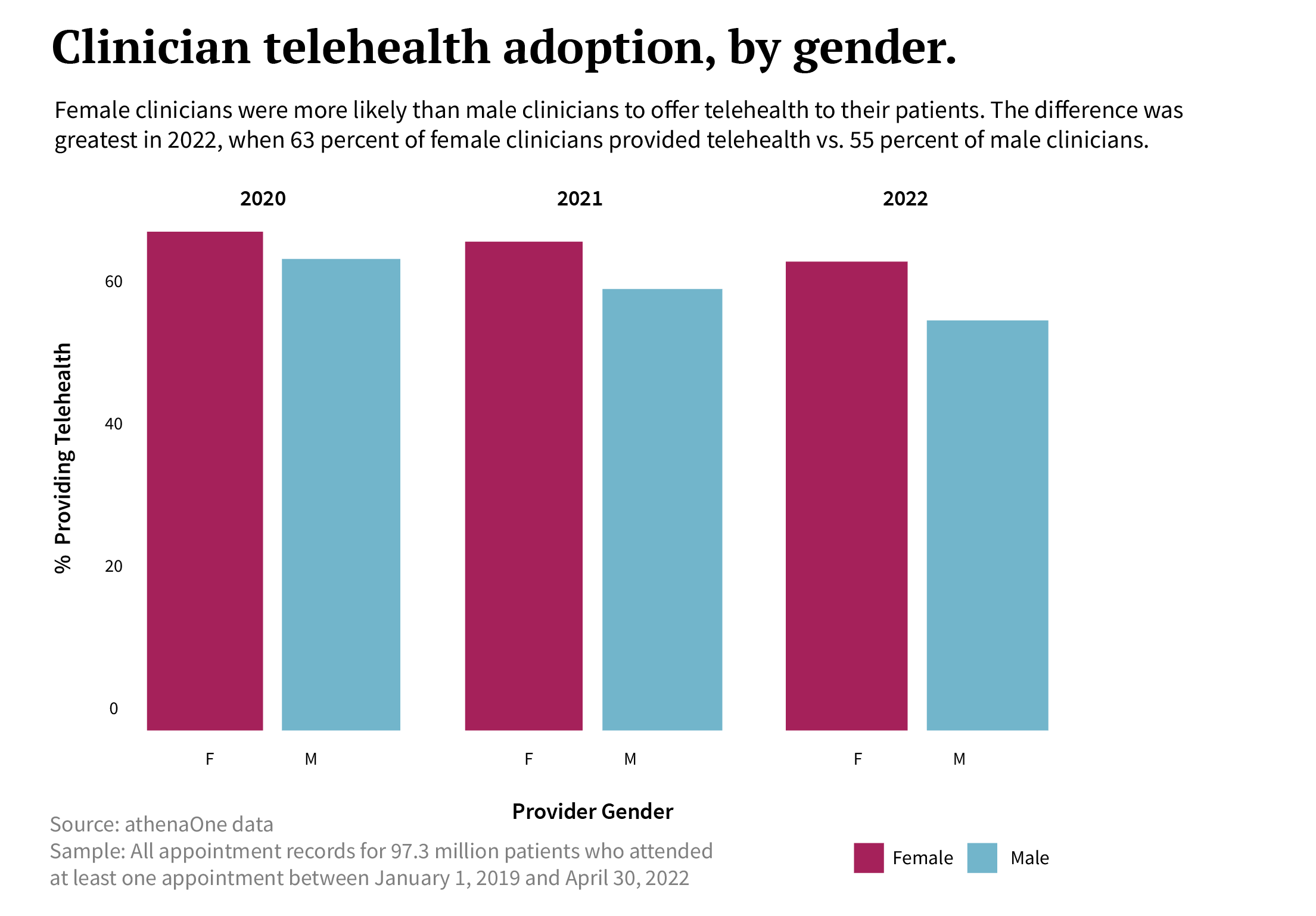 While the survey included adult participants both within and outside of the athenahealth network, the researchers used it in an attempt to shed light on the data they’d collected.

Of the survey respondents, a total of 66 percent said they had at least one telehealth appointment since the beginning of 2020. Most also said that their clinicians had begun offering telehealth as an option in the early days of the pandemic, and about half reported telehealth was still on the table as of mid-2022.

When survey participants who had used telehealth were asked about the reason for their most recent virtual visit, concern about a possible contagious illness topped the list for both men and women. Patients also reported they’d attended a telehealth appointment for regularly scheduled visits, new mental and physical health concerns, and for unplanned check-ins about a chronic illness. 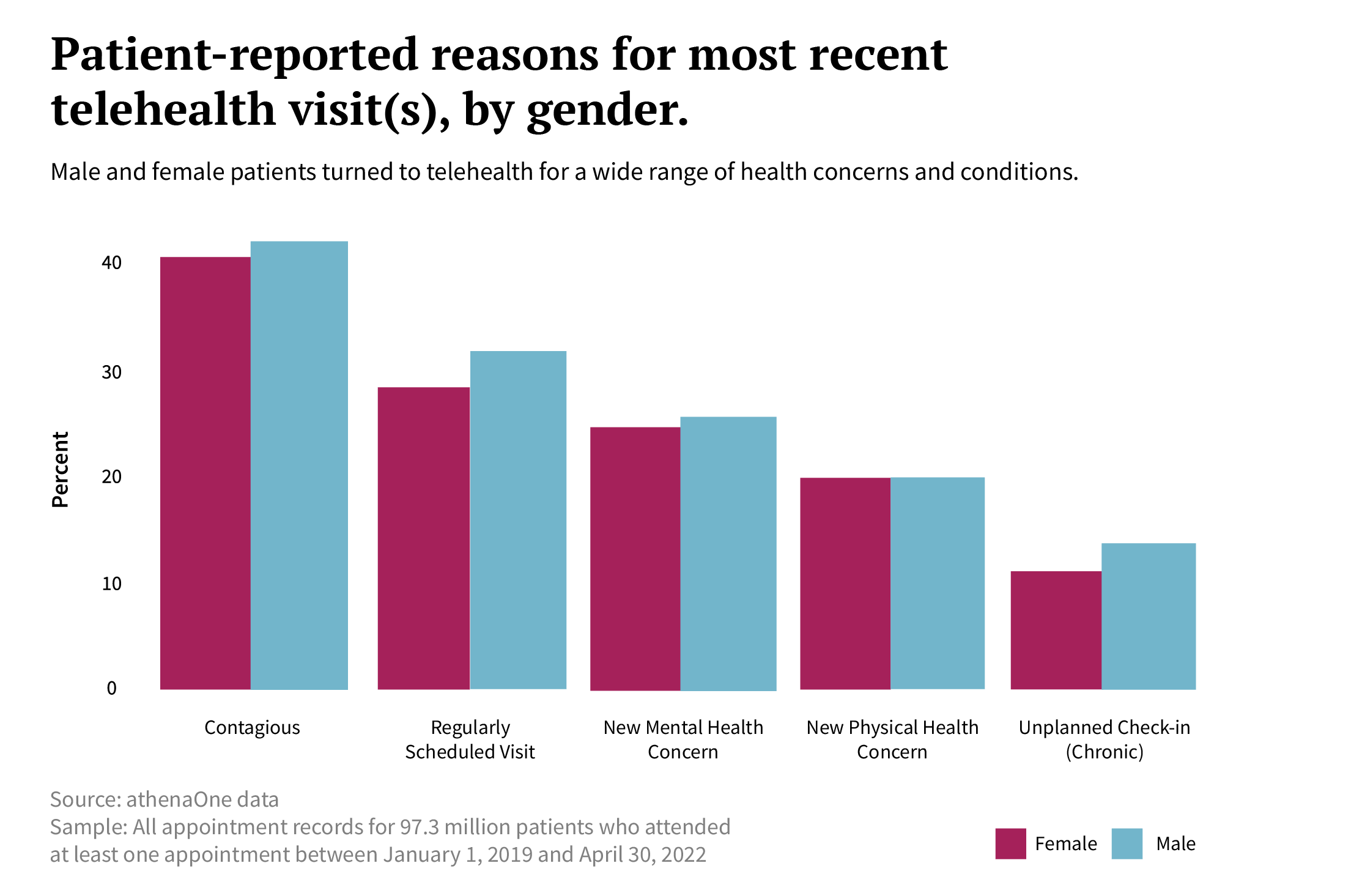 Asked to elaborate on why they chose telehealth over seeing a clinician in-person, a majority of patients, men and women alike, said it was because they were worried about contracting COVID if they went to the clinic. Others turned to telehealth on the recommendation of their provider, or for personal convenience when they didn’t think their health concern warranted an in-person visit. 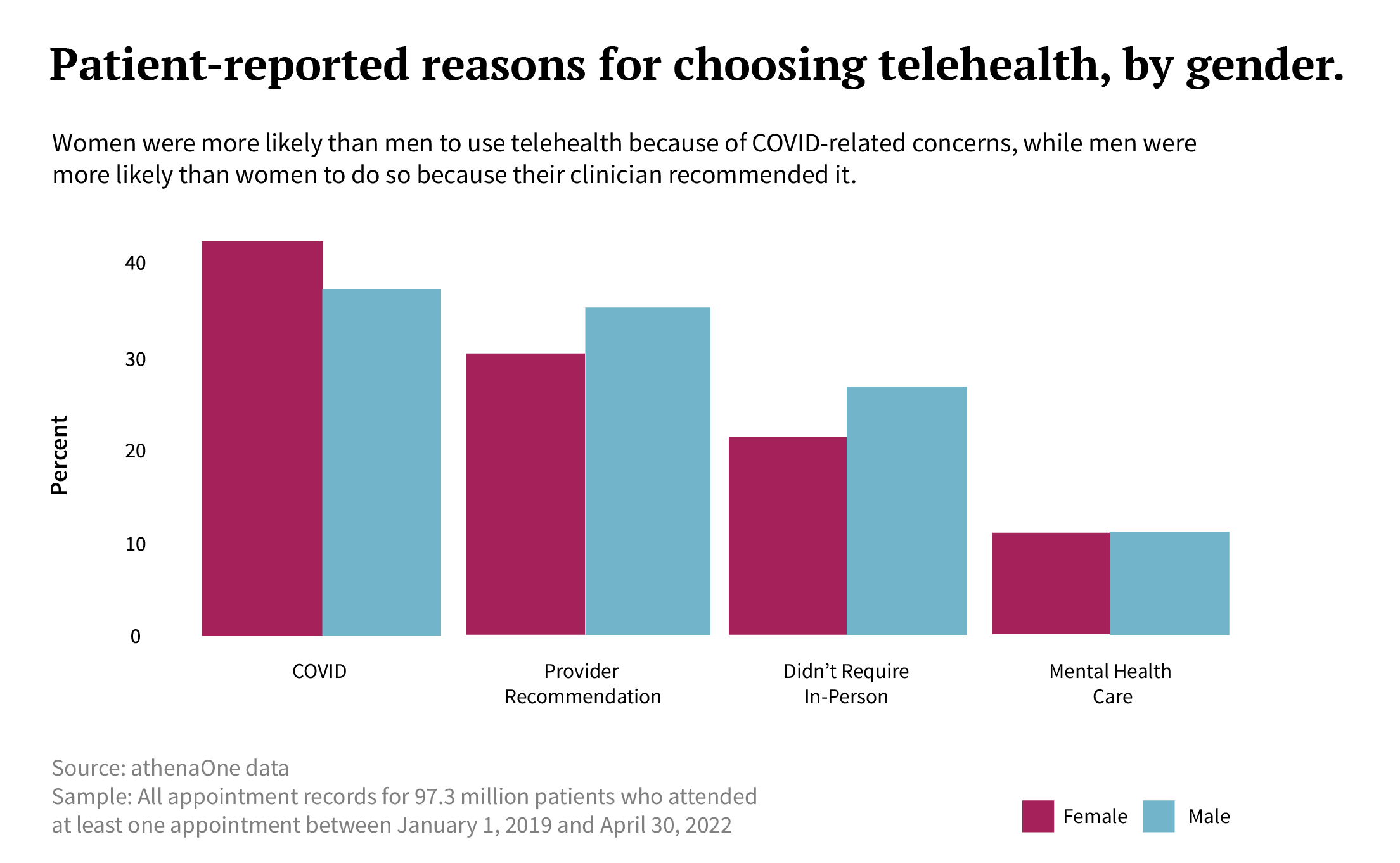 Finally, all survey participants — both telehealth users and non-users — were asked if they intended to use telehealth in the future. Here, men were somewhat more likely to answer in the affirmative (about 50 percent of men said yes, vs. 45 percent of women), and only about 1 in 10 within either cohort said they did not plan to use telehealth again. 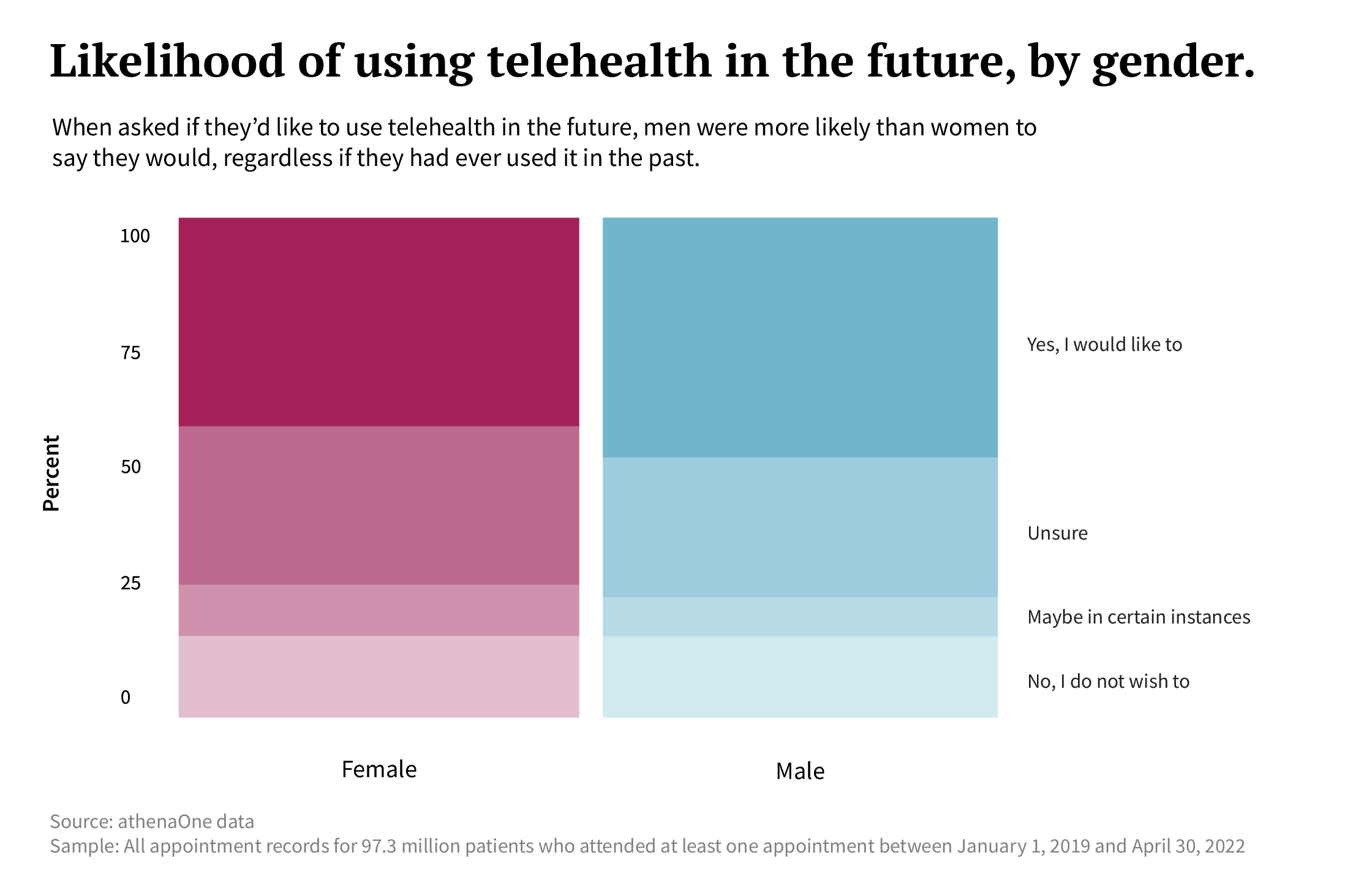 Questions about why gender differences exist

For all that they say about trends in telehealth usage, neither the survey nor the athenahealth network data reveal why women have more readily embraced telehealth than male patients and clinicians. Still, says athenahealth Quantitative Research Manager Allison Roberts, one could look to a number of other studies for clues.

Past athenahealth research has shown, for example, that female clinicians devote more time to patient charts outside of office hours than their male counterparts. In the context of in-person care, they also spend more time with patients, on average, and are more likely to go over scheduled appointment length. “It’s just a hypothesis,” Roberts says, “but it could be that societal nudges may pressure female clinicians to deliver care in a way that’s more accommodating to patients compared to their male colleagues.”

Other research has shown that during the pandemic, many people, but women more than men, were forced to hit the brakes on their careers in order to support their families. Among doctors, one survey found, women were far more likely than men to suddenly take on new childcare duties and shift to mainly working from home. “It’s possible that female clinicians offered telehealth at a higher rate because it allowed them to juggle their family responsibilities,” Roberts says. “And many female patients may have turned to telehealth for the same reason — for the flexibility it gave them.”

Whatever the case, Roberts adds, the findings suggest that even if a practice does introduce telehealth, not all clinicians or patients will be equally likely to utilize the service. “If you’re hoping to encourage widespread adoption, you should try to ensure that demographic differences — gender being one of them — don’t stand in the way of success.”